The Stranger in the Woods: The Extraordinary Story of the Last True Hermit by Michael Finkel- Feature and Review 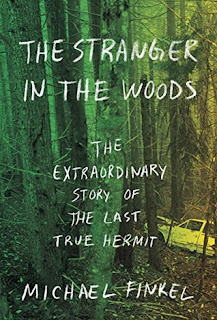 ABOUT THE BOOK:
Many people dream of escaping modern life, but most will never act on it. This is the remarkable true story of a man who lived alone in the woods of Maine for 27 years, making this dream a reality—not out of anger at the world, but simply because he preferred to live on his own.
In 1986, a shy and intelligent twenty-year-old named Christopher Knight left his home in Massachusetts, drove to Maine, and disappeared into the forest. He would not have a conversation with another human being until nearly three decades later, when he was arrested for stealing food. Living in a tent even through brutal winters, he had survived by his wits and courage, developing ingenious ways to store edibles and water, and to avoid freezing to death. He broke into nearby cottages for food, clothing, reading material, and other provisions, taking only what he terrifying a community never able to solve the mysterious burglaries. Based on extensive interviews with Knight himself, this is a vividly detailed account of his secluded life—why did he leave? did he learn—as well as the challenges he has faced since returning to the world. It is a gripping story of survival that asks fundamental questions about solitude, community, and what makes a good life, and a deeply moving portrait of a man who was determined to live his own way, and succeeded.

The Stranger in the Woods: The Extraordinary Story of the Last True Hermit by Michael Finkel
My rating: 4 of 5 stars

The Stranger in the Woods: The Extraordinary Story of the Last True Hermit by Michael Finkel is a 2017 Knopf publication.

Is it fact or fiction?

I don’t suppose this story ever showed up on my Newsfeed here in Texas, or if it did, it didn’t register with me at the time. But, I will say, that as an extreme introvert, I am no longer concerned about my tendency to avoid social gatherings, because Christopher Knight’s case makes me feel like a social butterfly by comparison.

Christopher Knight when ‘off grid’ shortly after graduating from high school and spent the next twenty-seven years of his life living in the woods in rural Maine. To survive, he rummaged through summer cabins, uninhabited camp sites and such, and stole food, radios, batteries, and all manner of other items to live on. He soon earned the moniker of ‘The North Pond Hermit’ and was highly sought after by the police. 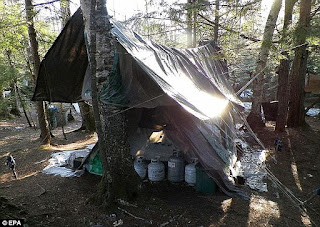 One day, while rummaging through an off season camp site, his luck ran out and he was arrested. This is when Finkel became involved in starting up a correspondence with Christopher, that led to the writing of this book, and if I’m not mistaken a documentary as well.

This story is fascinating, due in part, to how Christopher managed to survive those brutal Maine winters out in the woods. But, he was far more brilliant than I would have imagined. He’s smart, very smart, but he just didn’t want to live around people. If he had done it the right way, without stealing from people, it really would have been much more remarkable, and he would still be out there living the life he prefers.

It is hard for people to understand someone like Christopher. I can relate to him in many ways, but certainly have no desire for that extreme manner of solitude. Yet, someone who shuns society, who is different from the norm must be psychoanalyzed the nth degree and it was suggested to the reader that Christopher may have some symptoms of Asperger’s or maybe even schizophrenic tendencies.

Christopher’s childhood can account for some of his behavior, I would think, since he was raised in a rather isolated environment. Christopher knew how to survive without constant companionship and apparently had no real need of it. 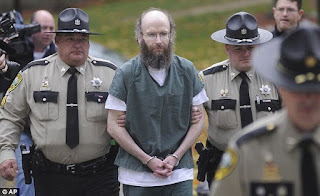 The one thing the book really takes a hard look at, is why? Why would someone deliberately choose to do what Christopher did? There are various reasons people become ‘hermits’ and it’s not as uncommon as you might think. Yet, in Christopher’s case, he into any of the usual categories and offers no real answers to this all consuming question.

The saddest thing about this story is that Christopher was forced back into society, and is obviously miserable. Yet, he was a thief and he frightened people, and a crime is a crime, even if no one was physically harmed. So, he had to pay his debt to society.

This is certainly an interesting story, and it’s hard to believe all of it is true, but truth, as you know, can be stranger than fiction. It’s an amazing story of survival, and a riveting character study, and an overall fantastical, incredible true story. While some people doubt aspects of , and I’m one of those people who remains skeptical at all times, no matter what, there is enough physical evidence to back up the story so, I see no reason to doubt him, at this time…


I don’t know how I feel about Christopher. I think people should live their lives as they see fit, and if he wants to live out in the woods all alone, I suppose that’s his prerogative. However, he should not have broken the law or rationalized his crimes in order to maintain his chosen lifestyle. While I do feel his discomfort and even understand it to some extent, I hope he can make peace with his life now and will become a productive citizen using the obvious gifts he was born with. I do wish him the best. 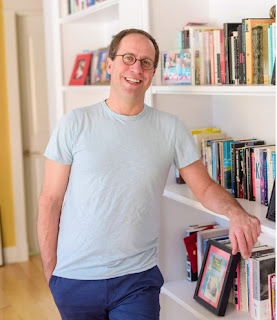 Michael Finkel is the author of "The Stranger in the Woods" and "True Story," which was adapted into a 2015 motion picture. He has reported from more than 50 countries and written for National Geographic, GQ, Rolling Stone, Esquire, Vanity Fair, The Atlantic, and The New York Times Magazine. He lives with his family in western Montana and southern France.