YOU by Caroline Kepnes- Feature and Review 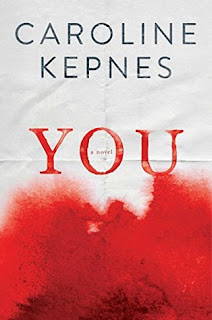 From debut author Caroline Kepnes comes You, one of Suspense Magazine’s Best Books of 2014, and a brilliant and terrifying novel the social media age.

When a beautiful, aspiring writer strides into the East Village bookstore where Joe Goldberg works, he does what anyone would do: he Googles the name on her credit card.

There is only one Guinevere Beck in New York City. She has a public Facebook account and Tweets incessantly, telling Joe everything he needs to know: she is simply Beck to her friends, she went to Brown University, she lives on Bank Street, and she’ll be at a bar in Brooklyn tonight—the perfect place for a “chance” meeting.

As Joe invisibly and obsessively takes control of Beck’s life, he orchestrates a series of events to ensure Beck finds herself in his waiting arms. Moving from stalker to boyfriend, Joe transforms himself into Beck’s perfect man, all while quietly removing the obstacles that stand in their way—even if it means murder.

A terrifying exploration of how vulnerable we all are to stalking and manipulation, debut author Caroline Kepnes delivers a razor-sharp novel for our hyper-connected digital age. You  a compulsively readable page-turner that’s being compared to Gone Girl, American Psycho, and Stephen King’s Misery.

You by Caroline Kepnes
My rating: 4 of 5 stars

YOU by Caroline Kepnes is a 2014 Atria/ Emily Bestler Books publication.

Joe Goldberg may be one of the creepiest characters I’ve happened across in a very long time!!

When Guinevere Beck walks into the bookstore where Joe works, he is instantly smitten… obsessively so. He decides she is made for him and he will have her… by any means necessary.

This book was named one of Suspense Magazine’s best books of 2014 and I can see why. Joe, if you haven’t guessed by now, is a psychopathic stalker. But, the unique thing about the book is that the entire story is told from Joe’s perspective, using a second person narrative, which I rarely see happen.


I have to say being inside of Joe’s brain, being privy to his thoughts is one weirdly fascinating, dark and disturbing place to be.

Beck is not a character I necessarily liked all that much. She’s shallow, but insecure, erratic, a little unstable, and very self-centered and absorbed. She makes the perfect target for someone like Joe, though. He seems so genuinely in love with her that if I didn’t know he was a real sleaze ball, I might have thought he was sincere.

But, he’s also quite vulgar and his thoughts are not always so sweet and flowery, as he indulges in sexual fantasies about Beck and leaves nothing to the imagination.

Joe’s narrative often made me laugh, especially when it came to his use of Twitter and his spot- on analysis of Beck’s friends or the reading habits and attitudes of customers in his bookshop. The realization that I found him darkly humorous or felt charitable towards him on occasion is a sobering thought.

The suspense builds as Joe manipulates Beck by hacking into her phone and stalking her on social media, as well as those closest to her in the most clever and diabolical ways imaginable. Don’t under estimate Joe for one minute!!

This is a very clever and imaginative novel, as well as a scathing look the importance placed on perfunctory social media hierarchy, which hasn’t changed much since 2014. The story is very, very twisted and disturbing and well, I loved it!

The author did a fantastic job with the characterizations, the dialogue and with the very important pacing of the book and of course Joe’s narrative which couldn’t have been done any better.

I believe there is a follow up to this book and I am definitely going to check it out! 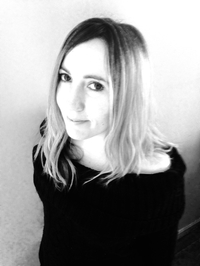 Caroline Kepnes is the author of You and Hidden Bodies. She splits her time between Los Angeles, California and Cape Cod, Massachusetts. She would love to hear from you over on Facebook.
Posted by gpangel at 1:00 AM