The Axeman of New Orleans by Miriam C. Davis- Feature and Review 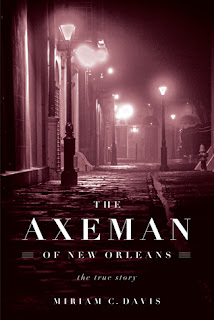 From 1910 to 1919, New Orleans suffered at the hands of its very own Jack the Ripper–style killer. The story has been the subject of websites, short stories, novels, a graphic novel, and most recently the FX television series American Horror Story. But the full story of gruesome murders, sympathetic victims, accused innocents, public panic, the New Orleans Mafia, and a mysterious killer has never been written. Until now.
The Axeman repeatedly broke into the homes of Italian grocers in the dead of night, leaving his victims in a pool of blood. Jordano, an innocent Italian grocer, and his teenaged son Frank of one of those murders; corrupt officials convicted them with coerced testimony. Miriam C. Davis here expertly tells the story of the search for the Axeman and of the eventual exoneration of the innocent Jordanos. She proves that the person mostly widely suspected of being the Axeman was not the killer. She also shows what few have suspected—that the Axeman continued killing after leaving New Orleans in 1919.
Only thirty years after Jack the Ripper stalked the streets of Whitechapel, the Axeman of New Orleans held an American city hostage. This book tells that story.

The Axeman of New Orleans: The True Story by Miriam C. Davis
My rating: 4 of 5 stars

The Axman of New Orleans: The True Story by Miriam C. Davis is a 2017 Chicago Review Press publication.

I thought I had heard about most serial killers, recent, past or distant past, but I never heard about this case. I understand this story was even featured on ‘American Horror Story’, but I don’t want much television, so I missed out on that.

This case is utterly fascinating and so absurdly strange, it’s impossible to believe some of the things that happened back then.

Starting in 1910, a series of murders targeting Italian immigrants, who mainly operated grocery stores, began to occur with an uneven frequency.

The murders are very gruesome and harrowing, and there doesn’t appear to be much a motive aside from the obvious one, which was a strong dislike toward the Italians.

The police, of course, had limited resources and New Orleans was especially under funded and inexperienced. Interviews with the victims and eyewitness accounts were often all they had to go on, other than suspicious behaviors. Often a suspect was held, only to be released due to a lack of evidence.

But, eventually, a couple of arrests were made, based on false testimony. A trial was held which ended with a couple of convictions, the details of which are detailed at length in this book and made for some pretty interesting courtroom drama.

But, the real killer was never brought to justice, and in fact continued to kill after leaving the New Orleans area.

It’s a perplexing case, which caused hysteria, and frankly echoes the sentiments people still seem to hold against immigrants, or other races, no matter what era of time, or the circumstances. But, it is worth noting that New Orleans was packed with immigrants from a number of areas, so why Italians? There are several theories, but it is still very strange.

It was also sad, since several of the victims were young married couples, some with small children. Some of the cases were pinned on the ‘Cleaver’, that may not have been connected, and innocent people found themselves under suspicion. There were several odd incidents that turned out to be unconnected, but were very curious, indeed.

New Orleans is always an interesting locale, and despite the grim subject matter, I did enjoy reading many of the historical details of the period.

I’m thankful the author decided to tackle this case, which as far as I know hasn’t garnered the mass media attention other serial killers from long ago did, and has remained relatively forgotten.

The book isn’t very long, but it’s packed with intrigue and drama and is very puzzling, as well as frustrating to think someone got away with so many murders, and people suffered who were innocent of any wrong doing.

This a quick and easy to read true crime story that definitely held my attention and has piqued my interest in this crime and the era it took place in.

True Crime readers and those who enjoy history or historical mysteries will not want to pass this one up. 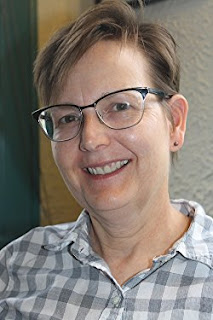 Miriam C. Davis has a PhD in history and is the author of Dame Kathleen Kenyon, a biography of the most important female archeologist of the twentieth century. She lectures for Smithsonian Journeys and lives in Montgomery, Alabama.
Posted by gpangel at 1:00 AM