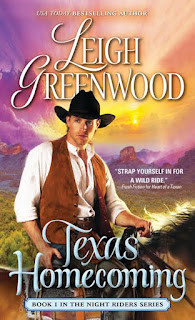 Cade, Captain of the Night Riders, is determined to lead his men home to Texas to recover from a long and brutal war. But when a fellow Rider betrays the team, Cade sets aside his hopes for peace and swears he will hunt down the traitor no matter what it takes…

He has a foolproof plan to use the feisty Pilar diViere to lure her traitorous brother out of hidinget when he takes the dark-eyed beauty into his arms, Cade can’t help but remember the passionate past they shared. He would do anything for a chance to rekindle that flame…even spare her brother’s life.

The war has changed them and each of the Night Riders must decide what is more important: love or revenge?


EXCERPT
“Let’s go for a walk instead.”
“I don’t want to walk,” she said, angry he’d forced her to leave the fiesta. “I can do that any time.”
“We can walk along the river. The moonlight on the water makes it look like a river of silver.”
A walk sounded awfully dull compared to dancing, but she’d never seen a river in the moonlight. Young ladies of aristocratic lineage weren’t supposed to be interested in such things. Cade made it sound very pretty. “Okay, but if I don’t like it, I want to go back to the fiesta.”
The fruit drinks had undoubtedly contained more tequila than she suspected. She had never felt so uninhibited, so unfettered by tradition, so unrestrained by her grandmother’s strictures. It felt absolutely marvelous.
“Have you walked along rivers in the moonlight with a lot of girls?” she asked.
Cade chuckled softly. “You should ask Owen that question.”
“I’m not interested in Owen. I’m interested in you.” She didn’t mean it quite the way it sounded, but it was too much trouble to explain.
“No one seemed particularly interested,” Cade said.
Pilar couldn’t understand that. To her, Cade seemed like exactly the kind of man a woman would want to walk with in the moonlight. He was strong, handsome, and dependable, everything a young woman would look for in a man.
“I can’t believe the young women you knew were so silly.”
“Young ladies want excitement, clever words, flattery,” he said.
“They’d want something very different if they’d been driven out of their home and forced to cook for a living.” She hadn’t meant to mention that, but what he said seemed so frivolous, she couldn’t help herself.
“Some lost more than you. They just wanted to forget.”
She would never forget. “Let’s not talk about the war. Pretend I’m one of those silly women who pant after Owen. Tell me I’m pretty and you get lost in my eyes.”
Pilar felt herself flush with embarrassment. She didn’t know where those words had come from. She’d never even thought anything so foolish in her entire life.
“You’re not pretty,” Cade said.
That’s what she got for putting words into a man’s mouth.
“You’re beautiful. Any man would give his right arm to be able to drown himself in your eyes.”
Pilar didn’t know what more those Virginia beauties could want. Manuel had never said anything half so poetic.
“Your fiancé should be cut into small pieces d to the coyotes for leaving you unprotected. If I had been your fiancé, not even loyalty to my country could have been enough to make me leave you.”
Pilar was wise enough to know that no man ever valued his wife above his loyalty to his country; his money or his children perhaps, but never his wife. But the effect on her was the same as if it had been the truth. She’d never felt so important in her life, and she liked it.
“Would you really have stayed in Texas if I’d been your fiancée?”
“Maybe not, but I’d have made sure you were safe before I left.”
“Why?”
“A man protects what he values. Nothing is more valuable than the woman a man loves.”
Pilar had never expected to be loved by her husband, but when she was alone and faced with the future, she couldn’t help dreaming about it. Respect and all that stuff about lineage and money didn’t seem enough in a world that could turn cold and cruel at any moment.
“How would you show a woman you loved her?” Pilar asked.
“Like this.” Cade took her in his arms and kissed her.
Pilar knew that some part of her must have been wanting this, hoping for it, but a part of her was shocked to find herself in Cade’s embrace. That same part was even more shocked to discover how much she wanted it, welcomed it, moved forward to meet him. Nor did she back away from the kiss when it turned from a genteel brushing of lips to an unbridled expression -up emotions.
She didn’t know what was responsible for the feeling that her life had suddenly turned in a new direction, had taken on a different meaning. She didn’t know how to account for the emptiness inside her, or the conviction that Cade was the only one who could fill it.
She only knew she’d been swept up in Cade’s powerful embrace, and it was the most wonderful feeling of her whole life.
She’d never imagined that anything could feel as wonderful as this kiss. His lips were full, his mouth soft. His tongue darted between her teeth before she knew what was happening. But even as her conscious mind started to reject the idea, her body’s response was the opposite—and enthusiastic. Her own tongue rose to duel with Cade’s, entwining sinuously around his, plunging deep into his mouth.
GPilar became aware that other parts of her body were reacting to Cade’s embrace. Her breasts—pressed hard against his chest—had become extremely er nipples swollen. A feeling unlike anything she’d ever experienced uncoiled deep in her belly, then began to spread through her limbs, causing her muscles to go limp. Instinctively she clung still more tightly to Cade.
Without warning, Cade broke the kiss, took her by the shoulders, and thrust her away from him.
The shock was total.
“We have to go back to the hotel before I forget you’re a lady I’ve promised to protect,” Cade
said.
Pila
r’s brain refused to function. She couldn’tewhat Cole was saying. She could only understand that all comfort had suddenly been torn from her. “What would you do if I weren’t a lady, if we didn’t have to go back to the hotel?”


Leigh Greenwood is the USA Today bestselling author of the popular Seven Brides, Cowboys, and Night Riders series. The proud father of three grown children, Leigh resides in Charlotte, North Carolina. He never intended to be a writer, but he found it hard to ignore the people in his head, and the only way to get them out was to write. Visit him at www.leigh-greenwood.com.
Posted by gpangel at 1:00 AM