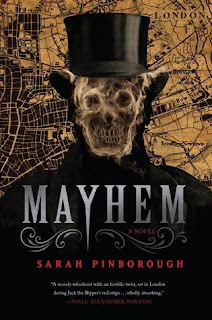 A new killer is stalking the streets of London’s East End. Though newspapers have dubbed him ‘the Torso Killer’, this murderer’s work is overshadowed by the hysteria surrounding Jack the Ripper’s Whitechapel crimes.
The victims are women too, but their dismembered bodies, wrapped in rags and tied up with string, are pulled out of the Thames – and the heads are missing. The murderer likes to keep them.
Mayhem is a masterwork of narrative suspense: a supernatural thriller set in a shadowy, London, where monsters stalk the cobbled streets and hide in plain sight.

Mayhem by Sarah Pinborough
My rating: 4 of 5 stars

Mayhem by Sarah Pinborough is a 2014 Jo Fletcher Books publication.

The Torso murders seemed to coincide with the infamous Jack the Ripper case in 1887-1889. But, due to the media sensation the Ripper murders caused, the Thames River case seemed to go mostly unnoticed.

This book is loosely based on those real- life crimes, but offers a paranormal tint to the story that heightens the already heavy sense of evil, which was an element I wasn’t expecting.

So, while this is a historical mystery, it could also be considered a horror novel. The author did a wonderful job of capturing the time period, creating the atmosphere of a city on edge, terrified of the horrific, and graphic murders plaguing London.

The main character is Doctor Bond, a man battling an opium addiction and the visions the drug brings about. When he is called to the scene of these horrific crimes, he recognizes a man he has seen in some of the opium dens he frequents. Coincidence? Apparently not. Bond discovers the man is a priest who is not only hunting the torso killer, but something far more evil. As the two join forces, Bond will discover that evil lurks much closer to him than ever could have imagined.

When I checked this book out of the library I didn’t realize the book had a supernatural tone, thinking it was a straightforward historical mystery and crime novel. Horror novels are not really a favorite of mine these days, but this one was very, very absorbing.

It’s creepy and suspenseful, with well drawn characters, who are each haunted in one way or another, but determined to contain the evil in their midst. In the end, I had to admit, this was a chillingly spooky novel that I appreciated more than I would have thought. 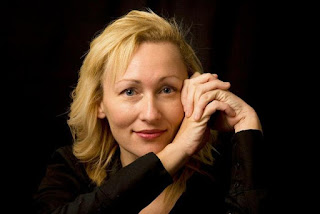 Sarah Pinborough is a critically acclaimed adult and YA author based in London.

Her next novel, Behind Her Eyes, coming for HarperFiction in the UK and Flatiron in the US (January 2017) has sold in nearly 20 territories worldwide and is a dark thriller about relationships with a kicker of a twist.