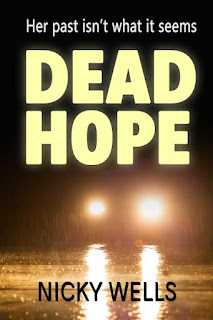 Cat Hope doesn’t want to go to prison. She needs a job, and she needs it fast: judge’s orders.

Kay Mahon, office worker by day and hacker by night, is on the run from a past life that he’d rather not remember.

When their paths cross, they discover that the night that derailed Cat’s future nineteen long years ago also changed the path of Kay’s life. Confused and intrigued, they begin to investigate the truth behind the deaths of the successful rock star couple Jackie and Adam Hope. Little do they know that their quest is putting Cat in grave danger.

Dead Hope by Nicky Wells
My rating: 4 of 5 stars

Dead Hope by Nicky Wells is a 2017 publication.


Nicky Wells’ first foray into the mystery thriller genre is an ideal combination of mystery and romance.


In order to keep herself from going to jail, Cat Hope followed the orders of the judge by completing rehab, starting community service and getting a job, which is where she meets Kay Mahon.

Kay lives the double life of a mild mannered office worker by day, and hacker by night. When he takes Cat under his wing, the two discover they have a few things in common. After hearing , Kay vows to help her find out what really happened the night her rock star parents died.

This is one of those books that will appeal to a wide audience, ranging from traditional mystery, cozy mystery, romantic suspense and maybe even contemporary romance lovers.

Nicky is a big fan of rock music, and has written several novels with rock music backdrop, so it was only fitting she kept that theme running in the background. But, the story is centered clearly around Cat, who need to find out what actually happened to her parents so that she can find peace and move on with her life.

Kay turns out to be the perfect person to help her investigate. He has real skills with a computer, although he does crossover a few blurry lines with the law on occasion.

As the couple begins to put the pieces of the puzzle together, the simmering chemistry between them begins to burn hotter and hotter.

There are a few laugh out loud moments along the way, and some quick witted banter and dialogue, as well as a few jaw -dropping twists I never saw coming!

Overall, this novel mostly comes down on the light side, with little graphic violence, and is infused with humor and romance to round things out, making this a very easy to read, entertaining mystery.
Question: You’ve been a bit quiet this past year or so. What’s been happening? Where have you been?

Nicky: After the release of my last novel, the romantic comedy “Seven Years Bad Sex,” I decided to take a little breather and to allow myself some time to think about where I was going to go next, writing-wise. I took a whole six months off, and I spent that time with family and decorating a part of our house. Wouldn’t you know it, six months flew by, and I found myself brimming with ideas for not several books, and I got busy writing and planning and writing again\


A CONVERSATION WITH NICKY WELLS:

Tell us about DEAD HOPE. How did you come up with the idea?

Nicky: DEAD HOPE was born with the working title of “Deep Cover”.  When the idea came to me, I was still planning to write a romance featuring rock stars, and the key nugget is: what would happen if you transplanted a world-famous rock star into an office job like you and me might hold down? Moreover, what would happen if you removed that rock star from their natural habitat, the glittering metropolis, and placed them a sleepy rural town? Romantic and comedy ideas flowed galore.

So, DEAD HOPE was going to be a romantic comedy?

Nicky: A romantic comedy-slash-suspense, yes. That was the plan.

How did you get from romantic comedy-slash-suspense to thriller? That’s quite a leap.

Nicky: It might look that way, but it was actually a gradual progression. I’m an OCD planner. I can’t write if I haven’t got the book planned out in minute detail, so I sat down and started weaving all my wonderful ideas together. But there was one central question I couldn’t answer: Why. Why would this whole thing happen? What would bring the rock star to the office job in the middle of nowhere?

Nicky: I did a spider map of all the possible scenarios that could have got the rock star into his unusual circumstances, and I got a bit carried away. I allowed myself to really think out of the box, and suddenly one scenario jumped out at me that turned the plot entirely on its head. Funny how a small idea can prompt a cataclysmic change! My hero turned into a heroine, and while she’s the daughter of a famous rock star couple, she isn’t a celebrity in her own right. But at that point, the romance theme was still dominant.

Nicky: I finished planning and started writing. And as soon as I started writing, the thriller and crime ideas just took off. This baby wanted to be something completely different from what I had envisaged, so I had to abandon writing and re-plan. I went deep on the logistics of my core crime, my mystery, and I learned quite a bit about court and police procedures and forensics, more so than is evident in the story but lots of stuff that’ll come in handy in my next stories. In this way, DEAD HOPE turned from a romantic suspense into a crime thriller with a strong romance subplot.

But there is still some romance?

Nicky: There is still some romance. 

What about blood and gore?

Nicky: That, not so much. I don’t like blood and gore and while there is some—it is a crime story, after all—the novel is all about solving the mystery. I guess I’m trying to follow in the tradition of Agatha Christie and Sue Grafton, not that I could ever hope to aspire to match their genius.

Go on then, sell it to me. What’s DEAD HOPE all about?

A unique and delicious cocktail of crime, suspense and romance, “DEAD HOPE” is a compulsive page turner.

Cat Hope doesn’t want to go to prison. Kay Mahon is on the run from a past life that he’d rather not remember. When their paths cross, they begin to investigate the truth behind the deaths of Cat’s parents, the successful rock star couple Jackie and Adam Hope. Little do they know that their quest is putting Cat in grave danger...

BE SURE TO CHECK OUT NICKY'S GIVEAWAY OVER ON GOOD READS: 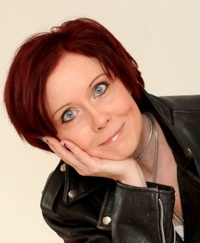 Nicky Wells writes captivating romance and breathtaking thrillers featuring famous (or infamous!) feisty heroes and extraordinary villains. DEAD HOPE is her eighth book and the first published novel in her “Wake Up Dead” themed thriller series, with the next two books scheduled for release through the course of 2017 and 2018. Nicky has previously published seven works of romantic with US publishing house, Sapphire Star Publishing, and independently.

Born in Germany, Nicky moved to the United Kingdom in 1993 and currently lives in Lincoln with her husband and their two boys. She loves listening to rock music, dancing, and eating lobsters. When she’s not writing, she’s hopelessly addicted to reading crime novels by the .