A Death at the Yoga Cafe- Michelle Kelly- Feature and Review 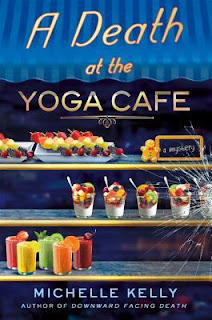 Keeley Carpenter has found her center. After returning to Befrey, the traditional English village she called home ten years ago, she’s opened her dream yoga café, which doubles as both a yoga studio and a delicious vegetarian café. Even better, Keeley is dating handsome Detective Ben Taylor, and things are beginning to look serious.
Too bad things never seem to run smoothly for long. Eager to get involved with the local community, Keeley sets up a booth at the annual Belfrey Arts Festival, along with her nemesis, fellow small business owner Raquel. Preparing herself to play nice, she’s shocked when Raquel’s boyfriend, Town Mayor Gerald, is found dead after a public spat. Despite Ben’s strict warnings to stay out of it, Keeley isn’t going to let an innocent woman take the blame for the murder—even if it is glamorous, spoiled Raquel.
Now Keeley must balance a precarious murder investigation with the demands of her growing business and now-strained relationship. But when the killer takes a personal interest in Keeley, can she find the culprit before she gets bent out of shape? Charming and delicious, this cozy follow up to Downward Facing Death features recipes from Keeley’s café and is perfect for fans of Cleo Coyle and Laura Childs.

A Death at the Yoga Café by Michelle Kelly
My rating: 4 of 5 stars

'A Death at the Yoga Cafe' by Michelle Kelly is a 2017 Minotaur publication.

I thoroughly enjoyed this cozy mystery. The characters are well drawn, the pacing is just right and the plotting is tight. The personal dramas do not overpower the mystery and crime solving, which is a common pitfall many fall into. The author stays on course and keeps the guessing game going all the way to the bitter end. 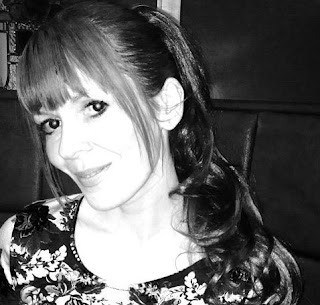 Michelle has been writing for a living since 2013 after seven years as a literacy teacher. She still teaches a creative writing courseMichelle is the author of historical romance books 'The Virgin Courtesan' 'Borgia Fever' and 'The Rake of Glendir' for Harlequin Mills and Boon and a paranormal romantic suspense series for Xcite Books beginning with 'The Lady is a Vamp'. She also writes crime, with her first contemporary thriller 'When I Wasn't Watching' published August 2014 with Harlequin Carina and reaching number one in the Kindle charts. The sequel 'Eyes Wide Open' was released in May 2015. Michelle is currently working on a cozy mystery series featuring yoga instructor Keeley Carpenter. These will be published by St Martins Press in the US and the first in the series 'Downward Facing Death' will be released in January 2016.
Posted by gpangel at 1:00 AM