The Guests on South Battery by Karen White- Feature and Review 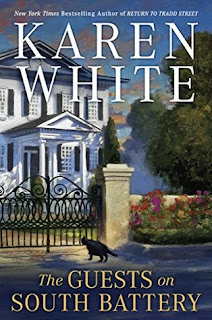 ABOUT THE BOOK:
New York Times bestselling author Karen White invites you to explore the brick-walked of Charleston, where historic house the memories of years gone by, and restless spirits refuse to fade away...

With her extended maternity leave at its end, Melanie Trenholm is less than thrilled to leave her new husband and beautiful twins to work, especially when she’s awoken by a phone call with no voice on the other end—and the uneasy feeling that the ghostly apparitions that have stayed silent for more than a year are about to invade her life once more.

But her return to the realty office goes better than she could have hoped, with a new client eager to sell the home she recently inherited on South Battery. Most would treasure living in one of old homes in the famous historic district of Charleston, but Jayne Smith would rather sell hers as soon as possible, guaranteeing Melanie a quick commission.

Despite her stroke of luck, Melanie can’t deny that spirits—both malevolent and benign—have started to show themselves to her again. One from sight, but appears whenever Jayne is near. Another arrives when an old cistern is discovered in Melanie’s backyard on Tradd Street.

Melanie knows nothing good can come from unearthing the past. But some secrets refuse to stay buried....

The Guests on South Battery by Karen White
My rating: 4 of 5 stars

The Guests on South Battery Tradd Street #5) is a 2017 Berkley publication.

All our familiar friends, family, and are gathered together once again. We also make a few new friends along the way too.

This series has been a delight from the very beginning and is one my very favorites.

I do recommend reading the previous installments to understand the dynamic between Melanie and Jack, as well as the supporting cast. For those who are following along, this is a solid addition to the series and I think you are going to enjoy it immensely.

This review is the copyrighted property of Night Owl Reviews. To read the full review, click on this link:
https://www.nightowlreviews.com/v5/Re... 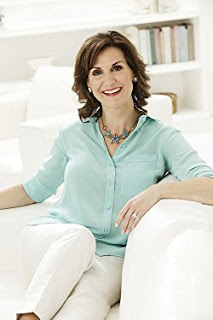 I grew up being a voracious reader and it was a natural step to turn my interest to . I have -winning and bestselling my latest release, FLIGHT PATTERNS, a multi-generational story of love, loss and mystery set along the gulf coast of Florida in Apalachicola. FLIGHT PATTERNS by in May, 2016.I write what others have termed "grit-lit"--southern women's fiction, as well as a contemporary paranormal mystery series set in Charleston, South Carolina. All of my books are set in the US South, and feature a female protagonist at a crossroads in her life. On January 10, 2017, THE GUESTS ON SOUTH BATTERY--the fifth book in the Tradd Street series, will be released. I'm so excited to be continuing Melanie and Jack's story--with a whole host of characters, both old and new. In April, 2017 THE NIGHT THE LIGHTS WENT OUT will be released. Set in suburban Atlanta in the fictional town of Sweet Apple, this is the book I'm calling my "Steel Magnolias" meets "The Girl on the Train." Spanning from the Depression era to modern day, it's a story of three very different women, and the true meaning of friendship.I live near Atlanta, Georgia with my husband, two children, and two of the cutest Havanese dogs, Quincy and Sophie. Readers may recognize Quincy as General Lee in the Tradd Street series. Happy reading!