The Girl Before- by J.P. Delaney- Feature and Review 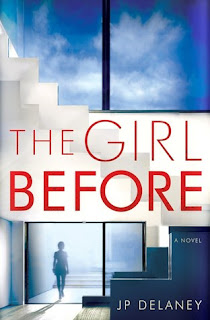 Please make a list of every possession you consider essential to your life.
The request seems odd, even intrusive—and for the two women who answer, the consequences are devastating.
Emma
Reeling from a traumatic break-in, Emma wants a new place to live. But none of the apartments she sees are affordable or feel safe. Until One Folgate Street. The house is an architectural masterpiece: a minimalist design of pale stone, plate glass, and soaring ceilings. But there are rules. The enigmatic architect who designed the house retains full control: no books, no throw pillows, no photos or clutter or personal effects of any kind. The space is intended to transform its occupant—and it does.
Jane
After a personal tragedy, Jane needs a fresh start. When she finds One Folgate Street she is instantly drawn to the space—and to its aloof but seductive . Moving in, Jane soon learns about the untimely death of the home’s previous tenant, a woman similar to Jane in age and appearance. As Jane tries to untangle truth from lies, she unwittingly follows the same patterns, makes the same choices, crosses paths with the same people, and experiences the same terror, as the girl before.

The Girl Before by J.P. Delaney
My rating: 4 of 5 stars

The Girl Before by J.P. Delaney is a 2017 Ballantine publication.

While this appears to be a debut novel, this author apparently has some experience with crime writing, having written this book under a pseudonym. I wish I knew who the ‘crime writer’ is- but I suppose that’s a mystery for another day.

In the meantime, I hear this book might be the basis for a movie, and Ron Howard would be the director! So, if that isn’t enough to peak your interest, I don’t know what will.

While this is yet ANOTHER book for ‘fans of ‘Gone Girl’ and ‘The Girl on the Train’, and yes, it does have the requisite ‘Girl’ in the title, this book stands on its own merits and needs no other comparison.

Two very different women, both having suffered emotional traumas, move in, at different times, into a very affordable, unique, technologically advanced apartment that stresses a minimalist lifestyle. The apartment’s owner screens his tenants by out a lengthy , and insists they sign a contract promising to adhere to a strict set of rules… around two hundred of them(!!!) and if they are not obeyed there will be .

The story alternates between the first person perspectives of Emma and Jane as they describe their time living in Edward Monkford’s apartment building. As the story progresses, we learn the two women bear a striking resemblance to one another, are both attracted to Edward, despite his OCD tendencies, but, Jane discovers that the previous tenant… Emma, died in the apartment, an apparent victim of suicide.

Jane becomes somewhat obsessed with Emma and her backstory, while her own personal relationship with Edward begins to deepen. But, her investigation into Emma’s death could come back to haunt her….

While it may seem obvious who ‘the girl before’ is, and some may guess correctly, I admit I didn’t see the twist coming and was completely surprised by the way the story developed.

The suspense is low key initially, with just a mild creepy feeling permeating the sterile environment the two women live in. But, as the story develops, a feeling of dread begins to grow, and before too long, I found myself immersed in these women’s lives, wanting to send out a warning signal, to advise caution, but didn't know who or what the main threat was.

The writing is superb, as the author drew me in, held my attention, managing to evoke feelings of concern for the tenants, on top of creating the feeling of foreboding and dread, that kept me turning those pages.

Of the two women, one is more controversial and the other is mildly bland, and were not necessarily people I related to or felt a kinship with, but I did feel sympathy for them and worried on their behalf, despite feeling frustrated with them at times.

I was slightly conflicted by the ending, which was somewhat anticlimactic, in my opinion. Other than that, I thought this was a pretty solid thriller, with a unique set up, and kept me interested from beginning to end.

The Girl Before is the first psychological thriller from JP Delaney, a pseudonym for a writer who has previously written best-selling fiction under other names. It is being published in the US in January 2017, with subsequent editions in over 30 countries. A film version is being brought to the screen by Academy Award-winning director Ron Howard.
Posted by gpangel at 1:00 AM