Good as Gone by Amy Gentry - Feature and Review 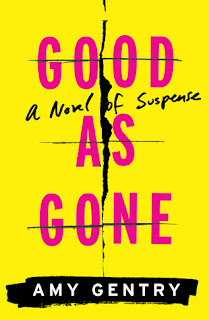 Thirteen-year-old Julie Whitaker was kidnapped from her bedroom in the middle of the night, witnessed only by her younger sister. Her family was shattered, but managed to stick together, hoping against hope that Julie is still alive. And then one night: the doorbell rings. A young woman who appears to be Julie , miraculously, home safe. The family is ecstatic—but Anna, Julie’s mother, has whispers of doubts.  She hates to face them. She cannot avoid them. When she is contacted by a former detective turned private eye, she begins a torturous search for the truth about the woman she desperately hopes is her daughter.

Propulsive and suspenseful, Good as Gone will appeal to fans of Gone Girl and The Girl on the Train, and keep readers guessing until the final pages.
READ AN EXCERPT:

Good as Gone by Amy Gentry
My rating: 4 of 5 stars

Good as Gone by Amy Gentry is a 2016 Houghton Mifflin Harcourt publication.

This novel is deeply consuming and thought provoking.

At the age of thirteen, Julie is kidnapped, while her sister, Jane watches from her hiding place. Her parents, Tom and Anna, struggle for years, caught in the limbo between hope and the reality of Julie’s probable death, which Jane pulls out of the stops just trying to live up to her sister’s mythological perfect, just trying to be noticed.

But, when Julie suddenly reappears, the apparent victim of sexual abuse a trafficking, the family is once more thrown into an unusual tailspin as hope once more contrast with disturbing information about Julie’s sudden return and the truth of how and why she was kidnapped.

For Anna, the only way to reestablish a relationship with Julie and hopefully heal the rift with Jane someday, will be to uncover the grim truth, not matter what that might be.

Once again, we have the ‘Gone Girl/Girl on a Train’ comparison from the publisher, and once again, I’m going to tell you to blow that off.

This is a solid and compelling psychological thriller, very moody and atmospheric, and emotional. I was impressed by some of the unique tactics the author used to weave the complex tale of Julie’s past together, but the switches in time and directions occasionally jarred. I also guessed some of the plot twists before they were revealed, but could not have worked out all the details and so it didn’t diminish my enjoyment of the book.

This is an effective and compelling read, and is a notable debut. I will definitely read more books by this author. 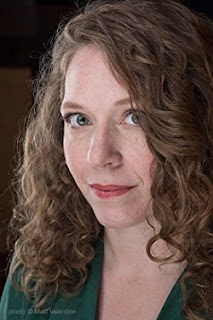 Amy Gentry is the author of the debut thriller Good as Gone, published by Houghton Mifflin Harcourt in 2016. She frequently contributes book reviews to the Chicago Tribune, and her freelance writing has appeared in Salon, Fusion, The Rumpus, LA Review of Books, Austin Chronicle, Gastronomica, The Best Food Writing of 2014, and many more. Amy holds a doctorate in English from the University of Chicago and lives in Austin, Texas.
Posted by gpangel at 1:00 AM