Dark Money: The Hidden History of the Billionaires Behind the Rise of the Radical Right by Jane Mayer- Feature and Review 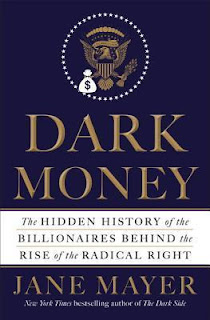 Why is America living in an age of profound economic inequality? Why, despite the desperate need to address climate change, have even modest environmental efforts again and again? Why have protections for employees been decimated? Why do hedge-fund billionaires pay a far lower tax rate than middle-class workers?
The conventional answer is that a popular uprising against “big government” led to the ascendancy of a broad-based conservative movement. But as Jane Mayer shows in this powerful, meticulously reported history, a network of exceedingly wealthy people with extreme libertarian views bankrolled a systematic, step-by-step plan to fundamentally alter the American political system.
The network has brought together some of the richest people on the planet. Their core beliefs—that taxes are a form of tyranny; that government oversight of business is an assault on freedom—are sincerely held. But these beliefs also advance their personal and corporate interests: Many of their companies have run afoul of federal pollution, worker safety, securities, and tax laws.
The chief figures in the network are Charles and David Koch, whose father made his fortune in part by building oil refineries in Stalin’s Russia and Hitler’s Germany. The patriarch later was a founding member of the John Birch Society, whose politics were so radical it believed Dwight Eisenhower was a communist. The brothers were schooled in a political philosophy that asserted the only role of government is to provide security and to enforce property rights.
When libertarian ideas proved decidedly unpopular with voters, the Koch brothers and their allies chose another path. If they pooled their vast resources, they could fund an interlocking array of organizations that could work in tandem to influence and ultimately control academic institutions, think tanks, the courts, , Congress, and, they hoped, the presidency. Richard Mellon Scaife, the mercurial heir to banking and oil fortunes, had the brilliant insight that most of their political activities could be written off as tax-deductible “philanthropy.”
These organizations were given innocuous names such as Americans for Prosperity. Funding sources were hidden whenever possible. This process reached its apotheosis with the allegedly populist Tea Party movement, abetted mightily by the Citizens United decision—a case conceived of by legal advocates funded by the network.
The political operatives the network employs are disciplined, smart, and at times ruthless. Mayer documents instances in which people affiliated with these groups hired private detectives to impugn whistle-blowers, journalists, and even government investigators. And their efforts have been remarkably successful. Libertarian views on taxes and regulation, once far outside the mainstream and still rejected by most Americans, are ascendant in the majority of state governments, the Supreme Court, and Congress. Meaningful environmental, labor, finance, and tax reforms have been stymied.
Jane Mayer spent five years conducting hundreds of interviews-including with several sources within the network-and scoured public records, private papers, and court proceedings in reporting this book. In a taut and utterly convincing narrative, she traces the trail of the billions of dollars spent by the network and provides vivid portraits of the colorful figures behind the new American oligarchy.
Dark Money is a book that must be read by anyone who cares about the future of American democracy.

Dark Money: The Hidden History of the Billionaires Behind the Rise of the Radical Right by Jane Mayer
My rating: 4 of 5 stars

Dark Money: The Hidden History of the Billionaires Behind the Rise of the Radical Right by Jane Mayer is a 2016 Doubleday publication.


I can read supernatural horror novels, the grittiest crime thrillers, true crime and a host of other material that sends shivers down my spine, but nothing paralyzes me with fear more than hidden forces influencing government in barely detectable ways, influencing the quality of life for millions of people in the process.

After this election, it has become clear, this radical right wing movement has been brewing for a good while. Billionaires basically buying America, using their money to infiltrate government to either promote or thwart policies in a way the average American could not imagine, in order to protect and add to their vast wealth. Hedge funds, special interests, propaganda, the works!

The Koch brothers, Charles and David, extreme libertarians, have been systematically chipping away at ‘big government’ for years, along with a select group of other billionaires, bent on keeping the rich, rich and the poor, poor, while they amass even greater fortunes for themselves.


Power and money have always gone hand in hand. The Koch’s and their cronies simply devised clever ways to keep their agendas hidden, and side step some tricky tax laws and rules, in order to force their personal beliefs onto an unsuspecting public, finding and using tax loopholes that benefit them, at the expense of the working class, while attempting to reduce regulations that would effectively should them down.


While Donald Trump doesn’t appear to have found much favor with the Koch’s while running for office, often spouting rhetoric that did not fit perfectly into their ideal plan, it would seem things may have worked out for some of their pals, though.

Just look at the appointment of Betsy DeVos as Secretary of Education, by the incoming Trump administration.

The DeVos were heavy contributors to the Koch brother’s causes over the years and Betsy has already stated she would like to freeze the federal government out of our educational system.

No matter what your political views are, or your opinion on climate change, the chapters that show the Koch brothers sending out propaganda pushing climate change as a hoax, while being funded by those who stand to lose the most by environmental efforts, is disturbing to say the least. It doesn’t matter what the issue is, really, it’s the possibility that anything can be manipulated, or enough doubt created to kill or promote whatever they wish, with their money and power.

This book traces the origins of the Koch brother's campaign, who helped them, supported them, and the tactics they used in building the radical right movement, which kept Obama from making good on some of his promises and effectively, had a role in putting America in the situation we now face.


“When called upon to split a treat with others, he would say with a wise-guy grin, ‘I just want my fair share- which is all of it’- Charles Koch

One interesting point the author makes points to an interview Charles Koch gave, in which he stated-
That welfare condemned the poor to a lifetime of dependency and hopelessness. He claimed he wanted people to have the hope that they can advance on their own merits, rather than the hope that somebody gives them something. Only, to state, in the very same interview that he promoted his own son to the presidency of Koch fertilizer. It didn’t seem to occur to him that his son, like many others in his network benefited from a job in the family business, or inherited a fortune, rather than being condemned to a lifetime of dependency and hopelessness, because ‘somebody gave them something’.

The Koch’s, among others, diligently worked behind the scenes, through organizations, like the AFP or Super PAC’s, or in some case through entities completely unknown, thus the term, ‘Dark Money’ to fund their agendas, which amounted to a mind boggling amount of money.

It didn’t always go their way…

Trump is not exactly on the same playing field as the Koch’s, especially with his threats to impose tariffs on businesses, and such, but they did help pave the way for him, with their building of the conservative, radical right, and looking at Trump’s cabinet picks, which are packed with billionaires, I think we need to be very concerned and watchful, more so than ever.

Overall, this is a book I would recommend everyone read, no matter which way you lean politically. There is a lot of information to digest, but, reading this book is truly eye opening, exposing the battle between big government and big money. Either way, in all likelihood, the middle and working class citizens lose, with the rich staying rich and the poor staying poor. 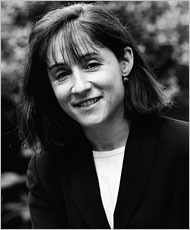 Mayer is a staff writer for The New Yorker and the author of three bestselling and critically acclaimed narrative nonfiction books. She co-authored Landslide: The Unmaking of the President, 1984–1988, with Doyle McManus, and Strange Justice: The Selling of Clarence Thomas, with Jill Abramson, which was a finalist for the National Book Award. Her book The Dark Side: The Inside Story of How the War on Terror Turned into a War on American Ideals, for which she was awarded a Guggenheim Fellowship, was named one of The New York Times’s Top 10 Books of the Year and won the J. Anthony Lukas Book Prize, the Goldsmith Book Prize, the Edward Weintal Prize, the Ridenhour Prize, the New York Public Library’s Helen Bernstein Book Award for Excellence in Journalism, and the Robert F. Kennedy Book Award. It was also a finalist for the National Book Award and the National Book Critics Circle Award.For her reporting The New Yorker, Mayer has been awarded the John Chancellor Award, the George Polk Award, the Toner Prize for Excellence in Political Reporting, and I. F. Stone Medal for Journalistic Independence presented by the Nieman Foundation at Harvard. Mayer lives in Washington, D.C.She is a Washington-based staff writer for The New Yorker, specializing in political and investigative reporting. Before that, she was a senior writer and front page editor for The Wall Street Journal, as well as the Journal's first female White House correspondent.
Posted by gpangel at 1:00 AM