Blood at the Root: A Racial Cleansing in America by Patrick Phillips- Feature and Review 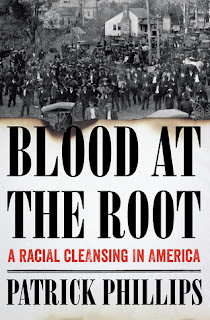 ABOUT THE BOOK:
A gripping tale of racial cleansing in Forsyth County, Georgia, and a harrowing testament to the deep roots of racial violence in America.

Forsyth County, Georgia, at the turn of the twentieth century was home to a large African American community that included ministers and teachers, farmers and field hands, tradesmen, servants, and children. Many black residents were poor sharecroppers, but others owned their own farms and the land on which they’d founded the county’s thriving black churches.

But then in September of 1912, three young black laborers were accused of raping and murdering a white girl. One man was dragged from a jail cell and lynched on the town square, two teenagers were hung after a one-day trial, and soon bands of white “night riders” launched a coordinated campaign of arson and terror, driving all 1,098 black citizens out of the county. In the wake of the expulsions, whites harvested the crops and took over the livestock of their former neighbors, and quietly laid claim to “abandoned” land. The charred ruins of homes and churches disappeared into the weeds, the people and places of black Forsyth were forgotten.

National Book Award finalist Patrick Phillips tells Forsyth’s tragic story in vivid detail and traces its long history of racial violence all the way back to antebellum Georgia. Recalling his own childhood in the 1970s and ’80s, Phillips sheds light on the communal crimes of his hometown and the violent means by which locals kept Forsyth “all white” well into the 1990s.

Blood at the Root is a sweeping American tale that spans the Cherokee removals of the 1830s, the hope and promise of Reconstruction, and the crushing injustice of Forsyth’s racial cleansing. With bold storytelling and lyrical prose, Phillips breaks a century-long silence and uncovers a history of racial terrorism that continues to shape America in the twenty-first century.

Blood at the Root: A Racial Cleansing in America by Patrick Phillips
My rating: 4 of 5 stars

Blood at the Root: A Racial Cleansing in America by Patrick Phillips is a 2016 W.W. Norton & Company publication.

This is a shocking historical account of the true events that took place in Cummings, Georgia in Forsyth county beginning in 1912 when three black men were accused of murdering a white woman.

The hysteria that ensued is stunning and I must admit, I had never heard of this case, but do recall vague murmurings about Cummings, Georgia from time to time. I suppose the news stories explains why it is seems oddly familiar to me, but I was completely ignorant of the town’s backstory.

The author of this book lived in Cummings during the seventies when his parents decided to move away from Atlanta in favor of small town life. Phillips, who was always encouraging a colleague to address controversial topics, was told to put his money where his mouth was, and so he rose to the challenge, choosing to uncover the truth about Forsyth county and the forcible removal of all its black residents, and how the community remained all white all the way up until the late nineties. 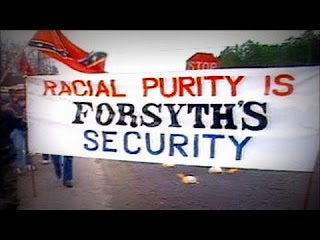 The result is a very detailed description of the events that stirred the evacuation of all blacks from the county, which also includes some very graphic and disturbing photographs and language. The author followed the trail of several families who were forced out and detailed how their lives were altered and what became of them.

The story winds its way up from the distant past to the present, which highlights the town’s staunch stand and stubborn refusal to allow blacks to live in their community, even drawing the attention of Oprah Winfrey, who bravely traveled to Forsyth during the early days of her talk show.

The author did an amazing job researching this book and sticks to the journalistic facts, which speaks volumes and still has me shaking my head in disbelief.

However, as I absorbed this piece of sad and outrageous history, it strikes me that the struggle appears to be constantly ongoing, and with the recent revelations the 2016 election brought to light, it seems possible we could take some huge steps backward instead of forward, which is not only frustrating, but truly frightening.

Overall, this book is a disturbing look at the past, and although it is not light reading, it is thought provoking and should serve as a reminder to us we should try to avoid repeating the same mistakes over and over again. Hopefully, this book will inspire us to work more diligently to protect all civil liberties. 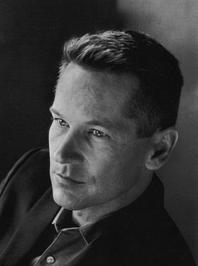 Patrick Philips was born in Atlanta, Georgia. He earned a BA from Tufts University, an MFA from the University of Maryland, and a PhD in English Renaissance literature from New York University. He is the author of the poetry collections Chattahoochee (2004), winner of the Kate Tufts Discovery Award, Boy (2008), and Elegy for a Broken Machine (2015), a finalist for the National Book Award. Through his poems, Philips frequently tells stories of earlier generations of his white, working-class family’s life in Birmingham, Alabama; in his work, he also grapples with race relations, the complex and violent dynamics of family relationships, and parenthood. In an interview for , Philips noted that he has found working traditional poetic forms to be “generative” while acknowledging a poem’s need for both narrative and song.

His honors include a fellowship from the National Endowment for the Arts, a Guggenheim Fellowship, and a Fulbright Scholarship to the University of Copenhagen. He won the American-Scandinavian Foundation’s translation prize for his translations of the work of Danish poet Henrik Nordbrandt.