He Will Be My Ruin by K.A. Tucker- Feature and Review 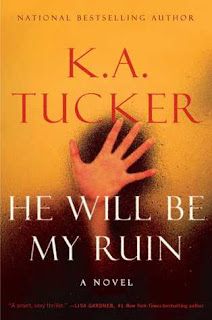 A woman who almost had it all . .
On the surface, Celine Gonzalez had everything a twenty-eight-year-old woman could want: a one-bedroom apartment on Manhattan’s Lower East Side, a job that (mostly) paid the bills, and an acceptance letter to the prestigious Hollingsworth Institute of Art, where she would finally live out her dream of becoming an antiques appraiser for a major auction house. All she had worked so hard to achieve was finally within her reach. So why would she kill herself?
A man who was supposed to be her salvation . .
Maggie Sparkes arrives in New York City to pack up what’s left of her best friend’s belongings after a suicide that has left everyone stunned. The police have deemed the evidence conclusive: Celine got into bed, downed a lethal cocktail of pills and vodka, and never woke up. But when Maggie discovers a scandalous photograph in a lock box hidden in Celine’s apartment, she begins asking questions. Questions about the man Celine fell in love with. The man she never told anyone about, not even Maggie. The man Celine believed would change her life.

He Will Be My Ruin by K.A. Tucker is a 2016 Atria Books publication.

He Will Be My Ruin is a dark and shadowy psychological novel of suspense, told in a unique and original style that kept me turning pages, way past my bed time.

Maggie and Celine were best friends growing up, but were polar opposites. Maggie came from vast wealth, while Celine’s mother did domestic work for Maggie’s parents. The girls remained close well into adulthood, where their paths separated. But, now Maggie is back in New York to box up Celine’s belongings after her untimely death, which has been ruled a suicide.

In the process, Maggie discovers Celine led a double life, harbored intense resentments, and Celine was often a ball of contradictions. But, when she finds a photo of a man hidden in a , with an odd passage written across it, Maggie begins to wonder if Celine committed suicide or if something far more sinister happened to her.

I love it when authors drop the traditional formula most often used in novels, because the story becomes more of a challenge, forcing me to slow down and absorb those tiny details I may have glossed over otherwise.
This story is very atmospheric, with an understated quality that drew me in and held my attention from start to finish. Every character is complex, shrouded in a fog -like cloak making it impossible to penetrate the barriers surrounding them.

The story almost has a noir feel to it at times, keeping the suspense level rising, deepening the mystery, leading me down dark passageways and tunnels, not sure which way to turn.

The story is intense, but the atmosphere keeps the pace from spiraling out of control, despite those ominous warning bells you hear ringing.

I think the effort here is interesting, and certainly left me impressed with the style, the writing, and the way the threads were woven together.

Overall, this is a novel fans of psychological thrillers should try. I don’t think you will be disappointed. 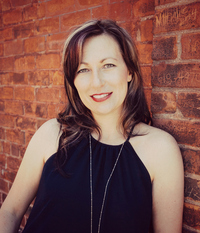 Born in small-town Ontario, K.A. Tucker published her first book at the age of six with the help of her elementary school librarian and a box of crayons.

She currently resides in a quaint town outside of Toronto with her husband, two beautiful girls, and a Chug.