A Deadly Thaw by Sarah Ward- Feature and Review 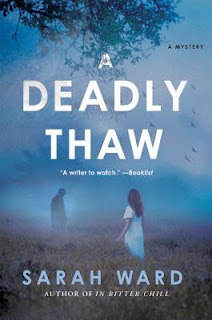 A man whose killer—his wife—was convicted 15 years ago discovered freshly murdered in this suspenseful mystery from critically acclaimed author Sarah Ward.
Lena is found guilty of murdering her husband, who was found smothered in their bed. She offers no defense, and serves fourteen long years in prison. But within months of her release nearly two decades later, his body is found in a disused morgue, recently killed. Who was the man she before, and why did she lie about his identity?
Detective Inspector Francis Sadler and his Derbyshire team try to discover how such a well-orchestrated deception could have occurred. DC Connie Childs is convinced that something greater than marital strife caused the murders, but before Lena can be questioned further, she vanishes. Back in Lena’s childhood home, her sister Kat, a therapist, is shocked by her sister’s duplicity. When she begins to receive mysterious packages from a young man claiming to know her sister’s location, is drawn into her own investigation of her family’s well-hidden secrets. As her inquiries begin to collide with the murder investigation, a link to the sisters’ teenage lives emerges, and the line between victim and perpetrator becomes blurred in this tightly-plotted, compelling novel perfect for fans of Deborah Crombie and Sharon Bolton.

A Deadly Thaw by Sarah Ward
My rating: 4 of 5 stars

A Deadly Thaw by Sarah Ward is a 2016 Minotaur publication.

What an interesting set up. Sadler, Palmer and Connie have their hands full with this one, as the case loops back to 2004 and back again to 2016 in alternate turns.

I love British mysteries, and so have certain criteria I’ve come to expect from them. Ward does an amazing job at creating love so much about the genre, but adds a very fresh and modern twist to it, which is nice to see.

This review is the copyrighted property of Night Owl Reviews. To read the entire review, click on this link:
https://www.nightowlreviews.com/v5/Re... 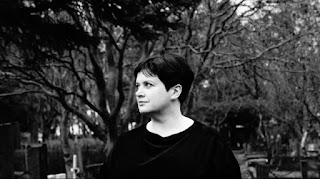 Sarah Ward is the author of In Bitter Chill, which was published in 2015 to critical acclaim. On her blog, Crimepieces (www.crimepieces.com), she reviews the best of current crime fiction published around the world, and she has also reviewed for Euro Crime and . She is a judge for the Petrona Award for Scandinavian translated crime novels. She lives in Derbyshire, UK.Follow Sarah on Twitter @sarahrward1Find her on Facebook at: www.facebook.com/SarahWardCrime
Posted by gpangel at 1:00 AM