The Vanishing Year by Kate- Moretti- Feature and Review + Giveaway 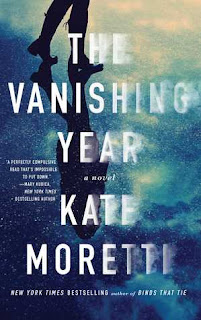 Zoe Whittaker is living a charmed life. She is the beautiful young wife to handsome, charming Wall Street tycoon Henry Whittaker. She is a member of Manhattan’s social elite. She is on the board of one of the city’s most prestigious philanthropic organizations. She has a perfect Tribeca penthouse in the city and a gorgeous lake house in the country. The finest wine, the most up-to-date fashion, and the most luxurious vacations are all at her fingertips.
What no one knows is that five years ago, Zoe’s life was in danger. Back then, Zoe wasn’t Zoe at all. Now her secrets are coming back to haunt her. As the past and present collide, Zoe must decide who she can trust before she—whoever she is—vanishes completely.
The Vanishing Year combines the classic sophistication of Ruth Rendell and A.S.A. Harrison with the thoroughly modern flair of Jessica Knoll. Told from the point-of-view of a heroine who is as as she is enigmatic, The Vanishing Year is an unforgettable new novel by a rising star of the genre.

The Vanishing Year by Kate Moretti
My rating: 5 of 5 stars

Ingenious! The cunning and well laid out plot sucked me into a web of intense suspicion and edgy suspense.

For Zoe, a woman with a deeply troubling past, falling in love with Henry, a very wealthy man, who practically sweeps her off her feet, it’s a dream come true, almost like a fairy tale. Even after a year of wedded bliss, she still keeps pinching herself, unable to believe how fortunate she is.

But, Henry is not fully aware of , so when she becomes the victim of a few break-ins and several other unsettling incidents, she begins to worry that her past has caught up to her, and becomes desperate to preserve her secrets and possibly her life.

This story falls into the domestic thriller genre, which has suddenly risen in popularity, which is fine by me because for some reason it make the stakes seem higher, and the underlying uneasiness feels more sinister.

This book is well written, with impeccable timing and pacing, and has everything a good psychological thriller should, plus totally screwed with my head! Good stuff! I loved it! Kate Moretti is the New York Times bestselling author of Thought I Knew You, Binds That Tie, and While You Were Gone. She lives in eastern Pennsylvania with her husband and two kids. Find out more at katemoretti.com, or follow her on Twitter (@KateMoretti1) or Facebook (KateMorettiWriter).