Hero in the Highlands by Suzanne Enoch - Feature and Excerpt 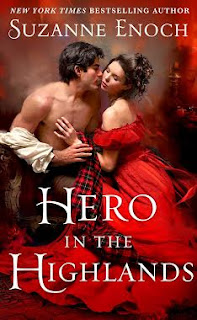 Great Scott! Scotland in 1812 isn’t really a destination spot, but it invites readers to take a different kind of adventure. New York Times bestselling author, Suzanne Enoch’s HERO IN THE HIGHLANDS (St. Martin’s Press, $7.99, 10/4/16—the first book in her brand new No Ordinary Hero series, will be sure to sweep readers off their feet and have them swooning. Scotland, 1812: He’s ferocious and rugged to the bone, an English soldier more at home on the battlefield than in any Society drawing room. And when Major Gabriel Forrester learns that he’s inherited the massive Scottish Highlands title and estate of a distant relation, the last thing he wants to do is give up the intensity of the battlefield for the too-soft indulgences of noble life. But Gabriel Forrester does not shirk his responsibilities, and when he meets striking, raven-eyed lass Fiona Blackstock, his new circumstances abruptly become more intriguing. Like any good Highlander, Fiona despises the English—and the new Duke of Lattimer is no exception. Firstly, he is far too attractive for Fiona’s peace of mind. Secondly, his right to “her” castle is a travesty, since it’s been clan Maxwell property for ages. As the two enter a heated battle of wills, an unexpected passion blazes into a love as fierce as the Highlands themselves. Is Fiona strong enough to resist her enemy’s advances—or is Gabriel actually her hero in disguise? If you haven’t already, then as bestselling author Lisa Kleypas said, “It’s time to fall in love with Suzanne Enoch.”

For a moment she considered going back into the storage room and pulling some more of the strings, after all. Something was bound to frighten him. She’d like nothing better than to see him fleeing shirtless into the night— and only because shirtless meant he’d panicked. Not because he looked and muscular and she hadn’t minded at all taking a gander at him, scars and all. No, that would be ridiculous. Her, thinking carnal thoughts about a Sassenach simply because he thought them about her.
As she’d said, they needed to make certain that this duke would leave of his own accord and, just as importantly, never wish to return. His arrival had set the household— and the countryside—on its ear, and yes, that seemed to be her fault. She’d decided not to let a nose- in- the- air solicitor order her about, and apparently that had consequences. She should have known better, but no one had bothered to be concerned about Lattimer until the old duke’s death had revealed that his own solicitors hadn’t done their jobs. Her lack of cooperation, though, meant that no one had felt it necessary to inform her either that a new duke had been found, or that he was heading north for a visit.
First thing in the morning she needed to go speak with Oscar Ritchie. The head groom at least knew of , which was more than she or anyone else she’d encountered could claim. The more information she had, the easier it would be to form a strategy to be rid of the new duke before he could make things worse than they already were. Before he could kiss her again and she forgot how much she was supposed to dislike him.
Finally she shut herself inside her own and sank into the chair set before the . The room sat only four doors down from Lattimer’s, and while she would have preferred to be farther away, this room had been hers since her second birthday— which had coincided with old Lattimer’s exit. Aside from that, she wanted to be close enough to hear if any trouble should raise its head.
Her mind centered on how to best be rid of this large, troublesome Englishman, and her drifting thoughts swirled about a fresh bullet scar on a muscular arm, an assessing pair of light gray eyes, and a mouth that seemed almost cruel until he grinned. And when he kissed her . . Now she didn’t know whether to fall asleep and dream about him, or stay awake to think about him all night. Blast it all.
Gabriel pushed aside the heavy curtains, then stilled with his hands gripping the green, linen- lined silk. “Good God,” he breathed, his bare feet, the chill in the air, the rumbling hunger in his stomach, all forgotten.
Before him, stretching out over perhaps half a hundred miles, lay the Scottish Highlands. The land directly beyond Lattimer’s formal gardens sloped off gently to the shore of a vast blue lake that curved to the east out of sight beyond a cluster of tumbled ruins on the rocky bank. Trees edged down to the western shore and up the hill beyond, with patches of purple heather and thistle carpeting open meadows. Beyond the lake, rough, rock- tumbled hills lifted into craggy white mountains which stood starkly silhouetted by the rising sun.
Of all the places he’d been in the world, of all the things he’d seen, this . . him. Belatedly two things occurred to him: he didn’t know the name of the lake, and most of what he could see belonged to him.
He’d known since he’d first donned a uniform that he was made for war. The idea of people trying to kill him, the violence, the cold and the heat, the long days of battle and the nights of waiting for the battle to come—he relished the things that broke other men. He was accustomed to responsibility and command, but owning land, being responsible for people who carried rakes and hoes rather than muskets and rifles, fell so far out of his realm of expertise he couldn’t even it over the horizon.
Gabriel took a slow breath. He knew battle. And Lattimer had just become his battleground. If he looked at it that way, the castle was his command tent. The Highlands his battlefield, and the Highlanders were either his troops, or the enemy’s. In the next few days he would have to decide which, and then act based on that fact. As he turned to finish dressing, he caught sight of a lone figure strolling through the garden in the direction of the stables. Even with a heavy coat and a sturdy hat jammed low on her dusky hair, he recognized Fiona Blackstock. From that attire she was either dressed to go riding, or to rob a mail coach. Though the latter would certainly be an interesting twist, he had to assume she meant to trot off somewhere out of his reach.
Every good victory came with a prize, and she would be his. That didn’t mean, however, that he was going to let her make more trouble while she was here. If she thought riding out early would keep her clear of him or give her the opportunity to gather reinforcements, she didn’t know him at all. In addition, somewhere between the and the drawing ’d learned his name, and before he’d given it to her. Someone here knew him, and he needed to figure out who that was. Not because he had anything to hide, but because this campaign looked to be about strategy and leverage. He needed to know who stood on the field of battle.


Copyright © 2016 by Suzanne Enoch and reprinted by permission of St. Martin’s Press 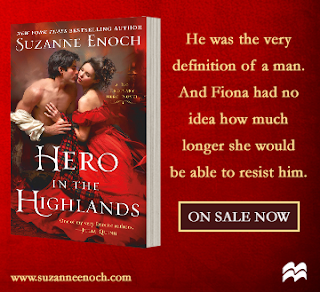 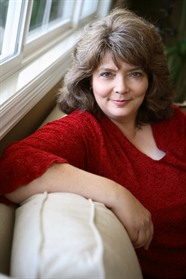 Suzanne Enoch grew up in Southern California, where she still balances her love for the Regency romances of Georgette Heyer and classic romantic comedies with her obsession for anything Star Wars. Given her love of food and comfy chairs, she may in fact be a Hobbit. She has written more than 35 romance novels, including traditional Regencies, Historical Romance, and contemporary Romantic Suspense. When she isn't working on her next book she is trying to learn to cook, and wishes she had an English accent. She is the bestselling author of The Scandalous Brides series, The Scandalous Highlanders series, and One Hot Scot.