Survivors will be Shot Again by Bill Crider- Feature and Review 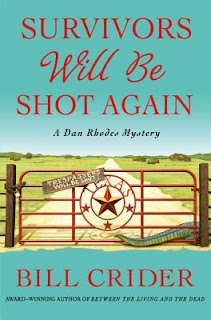 Life is never easy for Texas Sheriff Dan Rhodes. When he in the middle of the night to investigate gunshots at a haunted house, Rhodes finds the body of meth dealer Neil Foshee. Recently released from jail, Foshee has his fair share of potential murderers, including former girlfriend Vicki, her new boyfriend, the nephew of Clearview's mayor, and Foshee's criminal cousins Earl and Louie.
Complicating matters Seepy Benton, the community college math professor who has a new summer job. He's founded Clearview Paranormal Investigations and wants to solve the murder by communing with Foshee's ghost. But when he connects with something else instead and a second body is found, Rhodes is left with more questions than ever. Who's the dead person? How long has the body been hidden? Is Benton really able to communicate with ghosts? And most importantly: What, if anything, does the body have to do with Neil Foshee's death?
Between the Living and the Dead, Bill Crider's latest installment in the critically-acclaimed Sheriff Dan Rhodes mystery series, finds Rhodes dealing with ghost hunters, runaway bulls, and assorted low-level crimes, including prosecuting people who don't use their turn signals. It's all in a day's work in Clearview, Texas.

Survivors Will Be Shot Again: A Dan Rhodes Mystery by Bill Crider
My rating: 5 of 5 stars

Survivors will be Shot Again: A Dan Rhodes Mystery is a 2016 Minotaur publication.

This particular installment was outstanding, a real head scratcher, and held my attention from the first page to the last.

Here’s hoping Dan will soon relinquish his boycott on his beloved Dr. Pepper, and will finally get a much deserved day off without incident!

For those who follow this series, you are going to love this new installment! For those just joining us.. free to jump right in! This book will appeal to all mystery lovers, but especially to cozy mystery fans.

This review is dedicated to Bill Crider and his VBK’s! Take care my friend.

This review is the copyrighted property of Night Owl Reviews

To read the full review, click on this link: https://www.nightowlreviews.com/V5/Re... 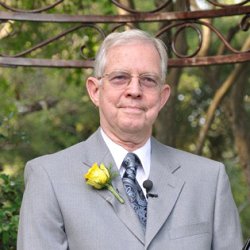 I was born and brought up in Mexia (that's pronounced Muh-HAY-uh by the natives), Texas, went to college at The University of Texas and North Texas State University, and taught high school and college classes for many years. In 2002 I retired as Chair of the Division of English and Fine Arts at Alvin Community College, in Alvin, Texas. I'm married to the lovely Judy, and we have two grown children, Angela, who's an attorney in San Francisco, and Allen, who's in the music business in Austin. Other than that, I'm a pretty boring guy.
Posted by gpangel at 1:00 AM