For Better of Worse by Lauren Layne- Feature and Review + Giveaway 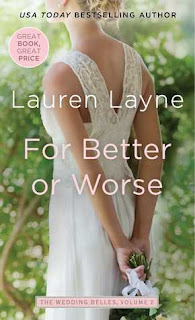 Will a budding wedding planner and her bad boy neighbor stop banging heads and start hearing wedding bells in the sexy second novel in USA TODAY bestselling author Lauren Layne’s irresistible new series that marries Sex and the City with The Wedding Planner?

When small-town Fowler finally gets promoted from assistant to actual, she’s determined to make it as one of Manhattan’s elite Wedding Belles. Unfortunately, her first client demands an opulent black-tie affair at the Plazain five months’ time. Heather’s days quickly become a flurry of cake tastings, dress-fittings, RSVP cards, and bridal tantrums. But what she’s really losing sleep over is the live music blaring from her playboy neighbor’s apartment all night.

Five years ago, Josh Tanner was an up-and-comer on Wall Street, complete with the penthouse and the migraines. But a grim cancer diagnosis made him realize there more to life than the corner office. If only he could convince his pretty, workaholic neighbor to let loose, too. As Heather lets down her guard, Josh is surprised when he starts falling for the sweet, vulnerable woman hiding beneath those power suits. Soon, it’s Heather’s turn to convince Josh to take the biggest risk of all: love. 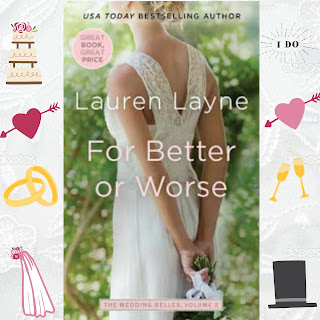 For Better or Worse by Lauren Layne
My rating: 4 of 5 stars

For Better or Worse by Lauren Layne is a 2016 Pocket Books publication. I was provided a copy of this book by the publisher and Edelweiss in exchange for an honest review.

Lauren Layne can write romantic comedy like nobody’s business and I’ve enjoyed many of her novels, but this is the first book I’ve read in the Wedding Belle series.

I was a little concerned about the setup, knowing up front some very serious, and possibly sad, topics would be mingled in, however, the seriousness was handled with grace and aplomb, and the story ended up being absolutely adorable.

“Live the life you want, not the one you have”

That is Heather Fowler’s motto. Her goal has always been to live in New York City and to be a wedding planner. She’s making strides toward achieving those dreams, but she wants to step out of the assistant role and become the head planner. To make the impression she has already achieved an elite status she moves into a nice Manhattan apartment, just as she discovers she’s landed the job of a lifetime. It looks like all her hard work is about to pay off. But, there’s a hitch. The bride wants a wedding at the Plaza… in three months time! Can Heather pull it off?

If she weren’t under enough stress, Heather’s neighbor in unit 4A practices his music, which is very loud, while she is trying to sleep. Frustrated, she knocks on his door to ask him to tone it down a notch, and meets the most gorgeous man she’s ever seen, and the most infuriating.

Josh was a hot shot on wall street, but has let that fast paced, all work, no play, high stress occupation go for a while so he can focus on his music and his band. The previous tenant in unit 4C was an older lady who was deaf and didn’t mind him playing music at all hours, and she baked him banana bread. However, the new Miss 4C just a little uptight, and Josh simply can’t resist the challenge of winning her over.

But, the joke may be on him as Heather begins work on winning 4A’s heart.


While the banter is light and laugh out loud funny all the way through, it’s obvious, some very heavy issues are weighing on Josh. His story is very emotional as he tries to come to terms with the struggles he’s faced over the past few years and where his life is headed now. He wants to live with gusto, knowing full well how short life can be, but something is missing from his life and deep down he knows what that something is, he just hasn’t admitted it to himself yet.

Heather’s backstory is not sad exactly, but it was not an easy road for her either. However, it’s made her the person she is today, but are her priorities on straight?

Josh won my heart almost immediately, with his larger than life personality and how he always got under Heather’s skin, thinking he was totally in charge of this little game, but was never as in control as he thought. I could almost read his mind sometimes, knowing he was in deep, deep denial, but understanding why he was holding back.

Naturally, Josh’s story is the one that commands the most attention and rings all the emotional bells. But, Heather pulls her fair share of the load too, as she learns to balance fun with work, learning what’s really important at the end of the day.

The epilogue sealed the deal for me and so I'm recommending this book to one and all.

ENTER THE RAFFLECOPTER DRAWING TO WIN PRINT COPIES OF THESE BOOKS: 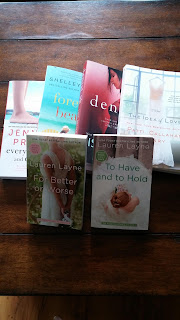 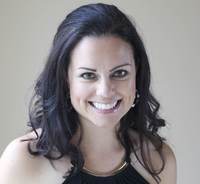 Prior to becoming an author, Lauren lived in Seattle with a cushy job in e-commerce/web-marketing. On a whim, she quit her job and moved to NYC to pursue a writing career. A year later, she had an agent and two publishing contracts.

She now lives in midtown she writes full time, although has been known to be lured away from the computer by a well-made cocktail.