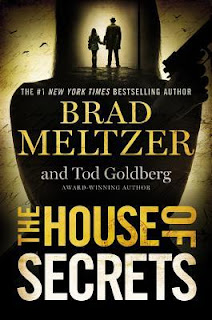 ABOUT THE BOOK:
A priceless book, hidden in a corpse.
A family secret, handed down through generations.
And a woman with no memory of her past.

#1 bestselling author Brad Meltzer returns with
THE HOUSE OF SECRETS

When Hazel Nash was six years old, her father taught her: mysteries need to be solved. He should know. Hazel's father is Jack Nash, the host of America's favorite conspiracy TV show, The House of Secrets.

Even as a child, she loved hearing her dad's tall tales, especially the one about a leather book belonging to Benedict Arnold that was hidden in a corpse.

Now, years later, Hazel wakes up in the hospital and remembers nothing, not even her own name. She's told she's been in a car accident that killed her father and injured her brother. But she can't remember any of it, because of her own traumatic brain injury. Then a man from the FBI shows up, asking questions about her dad-and about his connection to the corpse of a man found with an object stuffed into his chest: a priceless book that belonged to Benedict Arnold.

Back at her house, Hazel finds guns that she doesn't remember owning. On her forehead, she sees scars from fights she can't recall. Most important, the more Hazel digs, the less she likes the person she seems to have been.

Trying to put together the puzzle pieces of her past and present, Hazel Nash needs to figure out who killed this man-and how the book wound up in his chest. The answer will tell her the truth about her father, what he was really doing for the government-and who Hazel really is.

Mysteries need to be solved. Especially the ones about yourself.

The House of Secrets by Brad Meltzer
My rating: 5 of 5 stars

The House of Secrets by Brad Meltzer and Tod Goldman is a 2016 Grand Central Publication.

“Honor the people who love you.”

Jack Nash is a wildly popular television star, hosting a show centered around conspiracy theories.
He even got his son, Skip, in on the act. But, his daughter, Hazel, never much cared for that life, and is now a professor.

Just as Jack decides he is ready to retire, he and his two adult children are involved in a terrible car accident. Jack dies, while Hazel suffers a peculiar type of memory loss. But, when the FBI shows up asking questions about a dead man with a priceless book, once belonging to the infamous Benedict Arnold, in his chest, wearing a coat belonging to Jack Nash, Hazel knows something is horribly amiss, and begins to believe her father may have been murdered. Hazel sets out to solve the mystery of her father’s death and of her own identity. Who was Jack Nash, really? What secrets did he carry to his grave?

I love all the small, intimate details in this story, and the wild, unpredictable characters, set in the shadowy world of government conspiracies. There are so many layers to this story, all them compelling, many of them shocking and horrifying, and thought provoking. The suspense will sneak up behind you, tapping you on the shoulder, and make you squeal out loud.

“It was the people who lived absurdly happy lives, the eternal optimists, who never saw the monster waiting for them under the bed, whereas those with at least a tad of healthy fear admitted the possibility existed.”

The pacing is spot on, as secrets are revealed little by little, always squeezing an audible gasp of shock from me. The plot is intricate, and utterly absorbing, mingled with adventure, action, and drama. Conspiracy theories abound, with diabolical twists, and evil characters, and even a few moral dilemmas, to give you something to chew on. On all fronts this is a spectacular, top notch thriller, and is thoroughly entertaining.

But, for me the real zinger, are the characterizations. I loved Hazel. She is one the best female characters to show up within this genre in a long while. She has a dark side to her personality, one that haunts her, while she attempts to squelch those impulses. I loved that inner tug of war, and the psychology behind it. She’s darkly humorous, with sparkling wit, and pitch perfect timing, and had me cheering her on the whole way! She kicks butt without all the clichés.

Overall, this set up will segue nicely into the sequel, I am sure is coming, hopefully sooner, rather than later. There are still plenty of secrets to uncover and Hazel’s past still has a few locked doors we could explore, so suffice it to say, I will be looking forward to the next book with bated breath. 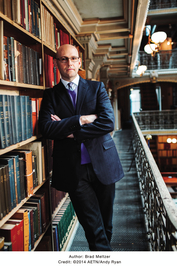 Brad Meltzer is the #1 New York Times bestselling author of The Inner Circle, The Book of Fate, and seven other bestselling thrillers. In addition to his fiction, Brad is one of the only authors to ever have books on the bestseller list for nonfiction (History Decoded), advice (Heroes for My Son and Heroes for My Daughter), children's books (I Am Amelia Earhart and I Am Abraham Lincoln) and even graphic books (Justice League of America). He is also the host of Brad Meltzer's Decoded on the History Channel, and Brad Meltzer's Lost History on H2. He currently lives in Florida. You can find much more about him at BradMeltzer.com. You can also see what he's doing right now at Facebook.com/BradMeltzer and on Twitter @bradmeltzer.

Tod Goldberg is the author of the novels Living Dead Girl, a finalist for the Los Angeles Times Book Prize, Fake Liar Cheat & Burn Notice: The Fix, as well as the short story collection Simplify, winner of the Other Voices Short Story Collection Prize and a finalist for the SCBA Award in Fiction.
Posted by gpangel at 1:00 AM