The Bourbon Thief by Tiffany Reisz- Feature and Review 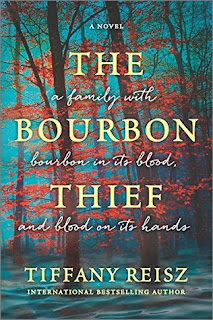 ABOUT THE BOOK:
From the internationally celebrated author of the Original Sinners series comes a brand-new tale of betrayal, revenge and a family scandal that bore a 150-year-old mystery

When Cooper McQueen wakes up from a night with a beautiful stranger, it's to discover he's been robbed. The only item stolen—a million-dollar bottle of bourbon. The thief, a mysterious woman named Paris, claims the bottle is rightfully hers. After all, the label itself says it's property of the Maddox family who owned and operated Red Thread Bourbon distillery since the last days of the Civil War until the company went out of business for reasons no one knows… No one except Paris.

In the small hours of a Louisville morning, Paris unspools the lurid tale of Tamara Maddox, heiress to the distillery that became an empire. But the family tree is rooted in tainted soil and has borne rotten fruit. Theirs is a legacy of wealth and power, but also of lies, secrets and sins of omission. The Maddoxes have bourbon in their blood—and blood in their bourbon. Why Paris wants the bottle of Red Thread remains a secret until the truth of her identity is at last revealed, and the century-old vengeance Tamara vowed against her family can finally be completed.

The Bourbon Thief by Tiffany Reisz
My rating: 5 of 5 stars

The Bourbon Thief by Tiffany Reisz is a 2016 MIRA publication. I was provided a copy of this book by the publisher and Netgalley in exchange for an honest review.

I have not read any books by this author, was totally unfamiliar with her work, having chosen this book based solely on the synopsis. Since this book is SO good, I decided to see what other novels, this author may have written….

Okay, I can’t really see myself reading any of Tiffany’s previous titles, but if she writes anymore books like this one…

Kentucky, outrageous wealth, horses and bourbon make a powerful blend, but spike the punch with a little scandal, dark and dirty family secrets, and the most potent ingredient of all- REVENGE- then you got yourself one toxic concoction, one sure to leave you very intoxicated, and maybe even a little hung over. But, if anyone were to ask me if  I would ever drink from this deadly potion again, the answer would be a resounding – YES!

For Cooper McQueen, very few women can compete with his love for good bourbon. But, when Paris walks into his establishment, she commands his undivided attention in a way no woman ever has before and the night is just getting started.

Cooper can’t get enough of Paris and she is more than happy to oblige, leaving him spent and exhausted. But, the spell is broken when he wakes up to find she has stolen a million- dollar bottle of rare bourbon. But, before she can make a clean getaway, she finds herself detained, with Cooper demanding an explanation.

Thus begins the spellbinding tale of Tamara Maddox, the sole heir to the Red Ribbon Bourbon dynasty, which built its foundation way back in the last days of the Civil War with money tainted by wicked deeds and spite.


The family’s success comes at a high price, and by the time Tamara is sixteen years old, any hope of a male heir is fading rapidly. The desperation to bring a male child into the family will set off a series of unfathomable events that will blow the doors wide open exposing years of lurid secrets, lies and cover-ups, prompting Tamara to exact the ultimate revenge.

Whoa! This is one wild tale and no, it’s not always pretty, but as twisted as this sounds, it’s my kind of story. I really liked this novel, which is deeply steeped in southern history, with just a little bit of a Southern Gothic slant, which is kind of rare these days.

“A family with bourbon in its blood, and blood on its hands”

This story blends history, mystery, suspense and romance together to create an unusual love story, told with a deft skill, which created a fireside atmosphere, while throwing explosive twists and turns at you, and had me sitting bug eyed, and slack jawed, with my heart in my throat, wondering what could possibly happen next. Trust me, Paris really knows how to weave a tale.

This story is unconventional, the characters vastly different from any you have ever encountered before, something which I really need right now, in order to keep my attention and avoid burn out on the same old, same old.

I loved Tamara, who set a course for new generations that will go a long way towards eradicating her tainted heritage. She was funny, smart, and tough, full of determination and grit.

Likewise, her beloved Levi, was the cool ointment in her life that healed her troubled soul, gave her hope, stability, peace and happiness.

Controversial… yes, very. But, did they do the right thing? Definitely. Do I want more like stories like this one?

PLEASE! Please, bring Paris and Cooper back for more great fireside tales. I’ll have my bourbon in hand, ready to lose myself in another one of Paris’ riveting stories. 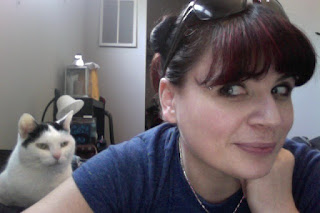 If she couldn't write, she would die.