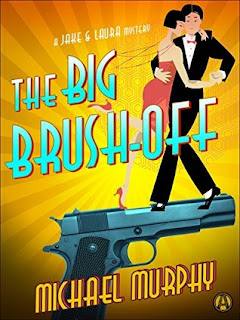 ABOUT THE BOOK:
The irresistible Jake & Laura return in Michael Murphy's witty, fast-paced mystery series—perfect for readers of Dorothy Cannell and Christopher Fowler. In The Big Brush-off, the charming and indomitable duo heads to the Midwest to solve a chilling cold case of a young girl's murder.

Blackie Doyle is dying. That's what Jake Donovan's literary agent tells him. Sales are falling, and the rough draft of Jake's latest Blackie novel doesn't look promising. Maybe Jake has been distracted by a recent barrage of real-life homicides, or by his marriage to the beautiful up-and-coming actress Laura Wilson, now slated for a part opposite Clark Gable himself. Whatever the reason, Jake decides to return to his roots. Which is why he and Laura hop the next train to the small town in Pennsylvania where Jake once worked as a Pinkerton detective.

Ten years ago, the murder of a teenage girl interrupted life in quiet, God-fearing Hanover. The unsolved case has always gnawed at Jake, and it seems no coincidence that as soon as he starts digging up old ghosts, he's once again writing like a dervish. Nor is it surprising that some townfolk would rather see the truth stay buried—and maybe even Jake and Laura with it. But the glamorous crime-solving pair refuse to leave before sorting through a bevy of suspects—and at long last nailing the one who almost got away with the not-so-perfect crime.

“Glittering with a hint of Nick and Nora, Michael Murphy's 1930s Manhattan provides a witty setting for murder and mayhem.”—Mary Daheim, bestselling author of The Alpine Yeoman, on The Yankee Club

“[Jake and Laura] are fun, witty, and charming, and [All That Glitters] is filled with the same kind of 1930s Hollywood glamour that made the film of The Thin Man such a classic.”—Popcorn Reads

“The third installment in Murphy's series is just as much fun as the first. The mystery is full of twists with an ample amount of red herrings, suspects, and action.”—Mystery Please!, on Wings in the
READ A SAMPLE:

The Big Brush-off by Michael Murphy
My rating: 4 of 5 stars

“The Big Brush Off” By Michael Murphy

Set during the depression era, Jake is reaping the rewards of his success with the Blackie Doyle series, and Laura has achieved stardom, working with Joan Crawford, and possibly even with Clark Gable!

However, fame and money has taken the edge off Jake’s hardboiled crime series, and his publishers are none too happy with his latest effort. Threatened with the termination of his contract, Jake will have to find a way to channel the Blackie Doyle of old.

In the meantime, a cold case Jake worked years ago, as a Pinkerton detective, comes back to haunt him, as the murder victim’s mother is dying and wants Jake to find her daughter’s killer so she can see justice served before she dies. 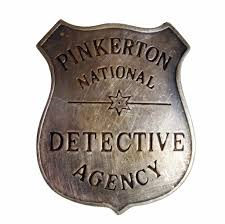 Jake and Laura travel to the Midwest town of Hanover, so Jake can focus on his novel and poke around in the old murder case. His snooping is making someone a little nervous, but also has Jake feverishly writing as his inspiration seems to have returned with relish on top.

Since the setting is in the Midwest, as opposed to New York or Hollywood, the pacing in this one is a little slower, meanders at times, and the hardboiled tone is not as prominent. However, the witty and humorous dialogue is as sharp and zany as ever.

The cold case is personal for Jake, adding an emotional element to the story, giving it a greater depth than in previous installments. I love the banter between Jake and Laura which makes them a delightful detective team, ala Nick and Nora.

This is a solid, entertaining addition to the series, and I am really enjoying it so far. Compared to the work of Christopher Fowler and Dorothy Cannell, this series is a must for historical mystery fans. 4 stars.

MORE BOOKS IN THE JAKE AND LAURA MYSTERY SERIES: 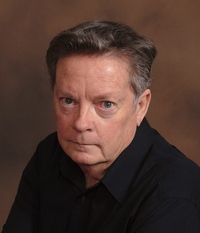 I began my first novel in 1999, wow I’ve been writing novels for fifteen years. I live in Arizona with my wife of 42 years, our four dogs, a ferel cat, a few chickens, and in the past year we adopted five of our grandchildren.
Posted by gpangel at 1:00 AM