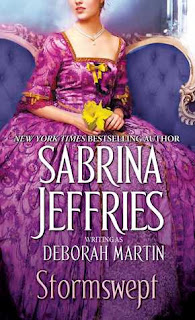 The first wedding night that Lady Juliana St. Albans spent with the dark and daring Rhys Vaughan was intoxicating, the heady culmination of her new husband’s driving hunger and her own awakened sensuality. When he mysteriously disappeared the next morning, she waited for him in hope and desperation. And when he was finally proclaimed dead in a shipwreck, she bitterly mourned the loss of her love.

The second wedding night that Juliana spent with Rhys Vaughan was six years later, after he returned to claim her just as she was about to wed another. This Rhys was different—bolder, harder, and convinced that she’d betrayed him. Only their blazing passion remains from their years apart. But is it enough to light their way through the maze of mystery, menace, and mistrust—to the love they once shared and would have to find again?

Stormswept by Deborah Martin
My rating: 4 of 5 stars

Stormswept by Sabrina Jeffries (writing as Deborah Martin) is a 2016 Pocket Books publication. I was provided a copy of this book as an XOXOpert, the official street team of XOXO After Dark.

I like to think I’m pretty knowledgeable about authors, but time and again, I discover I don’t know much at all. I never knew Sabrina Jeffries wrote historical romance novels under the pseudonym of ‘Deborah Martin.’

Originally published back in 1995, this novel has been re-issued by Pocket Books, and I am so happy I had the chance to discover ‘Deborah Martin’ and her backlisted titles.

Lady Juliana St. Albans and Rhys Vaughn fall in love, in this ‘Romeo and Juliet’ meets “The Count of Monte Cristo” setup.


Swept up in their ardor and passion for each other, forbidden lovers run away and get married, but are separated in a diabolical plot, that will keep them separated for six long years, and has Rhys convinced his beloved wife betrayed him.

Now, he has returned to reclaim Julianna and the property she manages, which is now his, by rights, preventing Juliana from finally remarrying.

But, the marriage appears to be doomed as Rhys refuses to listen to Juliana’s protestations that she took no part in the plan to ‘impress’ him, that left him scarred and angry. While the fiery passion that ignited between them all those years ago is still burning as hot as ever, the severed trust between them has left them both feeling frustrated and heartbroken.

Will the truth ever be revealed? Will Juliana ever regain Rhys’ trust so that their marriage can be real and happy?

For those accustomed Sabrina Jeffries regency romances, this one may feel heavier, with a slightly darker tint than you are used to. But, for a person so burned out on regency romance, this one was right up my alley, and very welcome change of pace.


'And though in the desert night
I've wandered many a year
And often had to drink
Of the bitter cup, despair
The yoke I suffered was my gain
And not for nothing came that pain'
William Williams Pantycelyn
'Fair Weather"

I loved the political Welch backdrop, which is something different, for a change, and I’m a sucker for forbidden romance and all the intrigue that implies. While Rhys finds it hard to let go of his lust for revenge and all his hate and bitterness, he eventually comes to see how it will poison his life forever, and ruin all he has worked to gain, if he doesn’t learn to trust his wife.

Juliana plays her hand well, and is a strong female protagonist, with a big heart, I couldn’t help but cheer for.

I really liked this story, and would love to see more of these backlisted titles reissued!

Sabrina Jeffries is the NYT bestselling author of over 50 novels and works of short fiction (some written under the pseudonyms Deborah Martin and Deborah Nicholas). Whatever time not spent writing in a coffee-fueled haze of dreams and madness is spent traveling with her husband and adult autistic son or indulging in one of her passions—jigsaw puzzles, chocolate, and music. With over 8 million books in print in 20 different languages, the North Carolina author never regrets tossing aside a budding career in academics for the sheer joy of writing fun fiction, and hopes that one day a book of hers will end up saving the world.