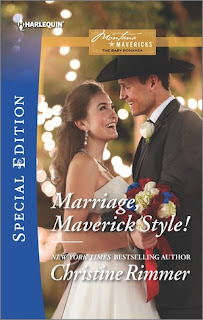 ABOUT THE BOOK:
THE MAVERICK MEETS HER MATCH

As summer arrives in Rust Creek Falls, the town is bursting with babies…and the Gazette is bursting with news. Did you hear there's a new billionaire in town? President and CEO of Drake Distilleries and Drake Hospitality, Carson Drake is no one's baby daddy…at least, not yet. But the handsome, delicious Los Angeleno has his eye on our own Tessa Strickland, and things are about to get very interesting…

Sweet, serious Tessa has had firsthand experience with heartbreak and is determined to avoid a second go-round. But after one unexpected night in Carson's sheltering arms, she begins to waver. Dear readers, that's only the beginning of the surprises. Saddle up and find out what happens when two commitment-phobes discover that love is life's richest reward! 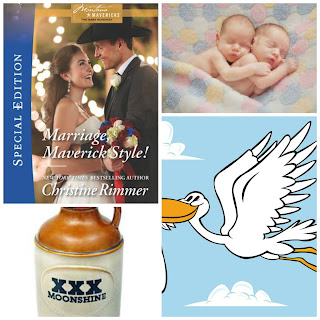 Marriage, Maverick Style! by Christine Rimmer
My rating: 4 of 5 stars

Marriage, Maverick Style! By Christine Rimmer is a 2016 Harlequin Special Edition publication. I was provided a copy of this book in exchange for an honest review.

This is a cute, whimsical story, quite unlike the other books in this series.

Carson Drake, the CEO of Drake Distilleries, has arrived at Rust Creek Falls, in order to buy the recipe of a specially made moonshine from a homeless man, which could make them both a lot of money. But, as it so happens, his arrival coincides with a ‘Baby Bonanza' parade. It would seem the town has had something of a baby boom recently, the result of a night of celebrations, and a few too many nips of that famous moonshine.

Carson’s eyes home in on a beautiful woman riding on one of the floats, holding a baby, and wearing a stork costume. He is instantly smitten and decides he must wrangle an introduction.

Tessa, is single, with no children, but was roped into participating in the parade, mainly because she fit into the costume.

She has returned home to Rust Creek Falls after making a muck of her career, in order to regroup. But, she is starting to feel a little restless, wondering if she could somehow find a job she really enjoys.

But, when she meets Carson, her plans could become reality, with his encouragement, but a surprise twist could put her dreams on hold.

I’ll wager there are not too many people out there who can honestly say they have never made a boneheaded decision or did something incredibly dumb, in the name of hormones. Tessa is guilty of that colossal error, but has come down pretty hard on herself.

After ruining her promising career, she is not ready to get involved with a man, not trusting herself and terrified of getting hurt.

Although Carson is very determined to change her mind and win her heart, an unexpected turn of events, catches him totally off guard, throwing him into a tailspin.

As it so happens, I just came away from reading a very heavy book, and needed something to offset that a little. This book was next in my TBR pile, so it came along at just the right moment.

The fun part of the story is the whimsy regarding the baby bonanza and its direct relationship to the infamous moonshine. Carter is a terrific hero, even though he confesses to having been a bit of a womanizer, and even when he’s thrown off balance. I liked the way he refused to give up on Tessa, despite her many doubts and self-recriminations.

Tessa was a hard nut to crack, and her current predicament really had her reeling. I felt bad for her, but it was also kind of funny, especially the way it all turned out in the end.

One other little difference here, is a spot of tense action, although it’s just a wee bit too imaginative, it serves its purpose in solidifying Carson and Tessa’s relationship, which just put the cherry on the cake.

Overall, this book would make a fun beach or poolside read this summer! 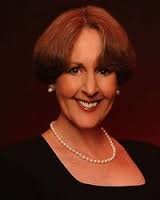