Only Beloved by Mary Balogh - Feature and Review 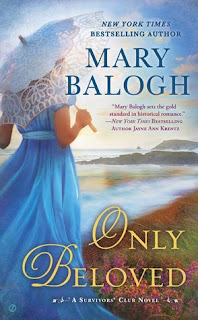 ABOUT THE BOOK:
From the legendary New York Times bestselling author of Only a Kiss and Only a Promise comes the final book in the rapturous Survivor’s Club series—as the future of one man lies within the heart of a lost but never-forgotten love...

For the first time since the death of his wife, the Duke of Stanbrook is considering remarrying and finally embracing happiness for himself. With that thought comes the treasured image of a woman he met briefly a year ago and never saw again.

Dora Debbins relinquished all hope to marry when a family scandal left her in charge of her younger sister. Earning a modest living as a music teacher, she’s left with only an unfulfilled dream. Then one afternoon, an unexpected visitor makes it come true.

For both George and Dora that brief first encounter was as fleeting as it was unforgettable. Now is the time for a second chance. And while even true love comes with a risk, who are two dreamers to argue with destiny?

Only Beloved by Mary Balogh
My rating: 5 of 5 stars

Only Beloved by Mary Balogh is a 2016 Signet publication.

It is always sad when a series comes to an end, but it helps tremendously if it gets a solid, satisfying conclusion, sending it riding off into the sunset with style.

I rarely get the chance to read a series, in order, from start to finish, but I managed to do that with the ‘Survivor’s Club’. Each story has been centered around a survivor of the Neapolitan war, each one needing a little more emotional healing than is usually provided. But, the one person we never got to know, was George, the Duke of Stanbrook, the man who so graciously opened up his home for the survivors.

George has nurtured, listened, consoled, and bolstered everyone who sought refuge with him, but now that all the survivors have found love, are starting families and moving forward with their lives, he finds that he feels empty, lonely, and in need of companionship. At the thought of re-marrying, the first person that comes to mind is the woman he met briefly a year ago… Dora Debbins.

George doesn’t let grass grow under his feet. He immediately seeks Dora out and wastes no time in making an offer of marriage, which she doesn’t hesitate to accept. Both of them feel quite content with the knowledge they will be very good friends, companions, and lovers, sans the sweeping romantic gestures and proclamations of true love. Theirs is a mature relationship based on mutual respect and a genuine fondness for each other.

But, their wedding day is fraught with unforeseen drama when George’s former brother-in-law barges in making all manner of ugly accusations against George, intimating his first wife’s death was more than it appears. Could there be any truth to these slanderous accusations?


For Dora, the prospect of getting married without her mother present, has her contemplating the prospect of reaching out to the woman who abandoned her and her two siblings, running away with her alleged lover, never once attempting to make contact with them again. Is it too late to forge a relationship? Is there more to the circumstances than meets the eye? Can Dora forgive her mother after all this time?

To me, Mary Balogh is the queen of Regency romance. She sets the story around this era of time, but provides mature, adult characters with real depth and meaty dilemmas for them to face and work out, while writing the most sensuous and romantic love stories I have ever read.

While the story does not lead up to a wedding, which is usually the way a romantic story concludes, this one begins with a wedding, but don’t let that fool you. This couple is laboring under the illusion that all that romantic love and starry eyed romance is only for the young, but soon find that is not the case.

Watching Dora, slowly draw George out, getting him to open up about his sad first marriage and the loss of his only son, is very emotional, but it’s time for George to receive a little healing himself.

But the most rewarding part of the story was how I felt as though I was right there with George and Dora as they got to know each other, faced challenges, adjusted to married life, and delighted in one another’s company, falling hopelessly and helplessly in love with each passing day, right before my very eyes. Big sigh!

Just like in the other segments of this series, the backstories are quite emotional and, once again, I found myself swallowing back a lump in my throat on a couple of occasions. George’s story is sordid and horrifying, but, while love is patient, so must we be, with good things coming to those who wait, and the wait for Dora and George was worth it, as they receive every good thing they deserve and more!

Overall, this love story was the perfect ending to a near perfect series. I loved touching base with the other survivors and seeing George finally have his very own happily ever after, especially after he selflessly gave so much to others. 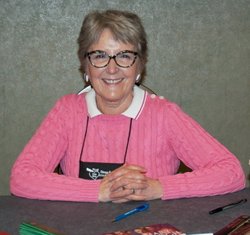 Mary Balogh is the New York Times bestselling author of the acclaimed Slightly novels: Slightly Married, Slightly Wicked, Slightly Scandalous, Slightly Tempted, Slightly Sinful, and Slightly Dangerous, as well as the romances No Man's Mistress, More than a Mistress, and One Night for Love. She is also the author of Simply Love, Simply Unforgettable, Simply Magic, and Simply Perfect, her dazzling quartet of novels set at Miss Martin's School for Girls. A former teacher herself, she grew up in Wales and now lives in Canada.
Posted by gpangel at 1:00 AM