Ink and Bone by Lisa Unger- Feature and Review 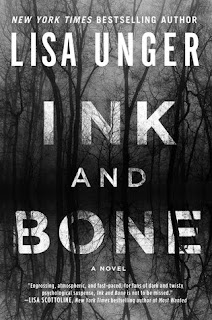 ABOUT THE BOOK:
An instant page-turner (Lisa Gardner) that straddles the line between thriller and horror...sure to appeal to a wide range of readers, including Stephen King fans. (Booklist, starred) A young woman's mysterious gift forces her into the middle of a dangerous investigation of a little girl's disappearance.

Twenty-year-old Finley Montgomery is rarely alone. Visited by people whom others can’t see and haunted by prophetic dreams, she has never been able to control or understand the things that happen to her. When Finley’s abilities start to become too strong for her to handle – and even the roar of her motorcycle or another dazzling tattoo can’t drown out the voices – she turns to the only person she knows who can help her: her grandmother Eloise Montgomery, a renowned psychic living in The Hollows, New York.

Merri Gleason is a woman at the end of her tether after a ten-month-long search for her missing daughter, Abbey. With almost every hope exhausted, she resorts to hiring Jones Cooper, a detective who sometimes works with psychic Eloise Montgomery. Merri’s not a believer, but she’s just desperate enough to go down that road, praying that she’s not too late. Time, she knows, is running out.

As a harsh white winter moves into The Hollows, Finley and Eloise are drawn into the investigation, which proves to have much more at stake than even the fate of a missing girl. As Finley digs deeper into the town and its endless layers, she is forced to examine the past, even as she tries to look into the future. Only one thing is clear: The Hollows gets what it wants, no matter what.

Ink and Bone by Lisa Unger
My rating: 4 of 5 stars

Ink & Bone by Lisa Unger is a 2016 Touchstone publication. I was provided a copy of this book by the publisher and Edelweiss in exchange for an honest review.

Having read the three short stories which are preludes to this full length novel, I had a little background about ‘The Hollows’ and the three generations of women empowered with psychic powers, each one coping in different ways.

Finley represents the third generation, but is less than thrilled by her gift and the responsibility of it. However, when a case comes to her attention which involves a missing girl, Finley gets sucked into the search whether she wants to or not.

I immediately liked Finley, the inked, motorcycle riding wild child, who is not afraid to speak her mind. As conflicted as she is about her future and the emotional drama she will face by accepting her psychic abilities, she does the right thing, and perhaps even learns to not only accept her fate, but embrace it, with a fierceness neither her grandmother or mother ever could.

I have some mixed emotions about the story, although it has all the elements needed for an atmospheric chiller, and even came with a few Gothic undertones, which I loved. Everything clicked along nicely with the suspense building with each chapter, the mystery solidifying, and the characters developing, becoming clearer, sharper, and stronger as the story progressed.


Despite feeling a little let down and sad by the way some things turned out, I was pleased by the characterizations, the ultimate feeling of closure, and the promise of new beginnings.

Finley is a character I will look forward to hearing from again, as she perfects her natural talent and uses it to help others. I think the past generations of gifted women will be very proud and ‘The Hallows’ may actually feel peace- for a little while at least. 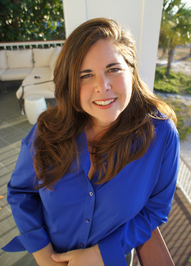 Lisa Unger is the New York Times and internationally bestselling, award-winning author of fourteen novels, including her latest thriller INK AND BONE.

Her books are published in twenty-six languages worldwide, have sold millions of copies and have been named “Best of the Year” or top picks by the Today show, Good Morning America, Entertainment Weekly, Amazon.com, Independent Booksellers, Milwaukee Journal-Sentinel and the Sun Sentinel to name a few.

Her essays have appeared in the New York Times, Wall Street Journal, NPR and Travel+Leisure Magazine. Lisa Unger lives in the Tampa Bay area of Florida with her husband, daughter and labradoodle.
Posted by gpangel at 1:00 AM