Welcome to Monday's Musical Moments here at The Book Review.  We all love music, so each week I feature a book centered around music in one form or another.  While some of these books are not new releases, but are still worth looking into.

This week's feature is: Catch a Wave: The Rise, Fall, & Redemption of the BEACH BOYS' Brian Wilson by Peter Ames Carlin 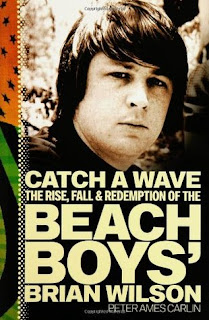 Now the subject of the movie Love & Mercy, starring John Cusack! Brian Wilson was the visionary behind America's most successful and influential rock band. And as the leader of the Beach Boys, he sold 100 million records, produced Pet Sounds, and built a catalog of songs that continues to define the sound and feel of American popular music. He also became one of the culture's most mysterious and tragic figures. But after spending years lost in a wilderness of despair, Wilson has fought his way back to productivity. And now with release of Smile - the masterwork that nearly undid him - he has returned to .

Now Peter Ames Carlin, who conducted in-depth, exclusive interviews with dozens of sources and listened to hundreds of hours of unreleased studio recordings and live music, tells a uniquely American story of the band, the music, and the culture the Beach Boys both sang about and helped create. Carlin brings a fan's passion, a seasoned journalist's objectivity, and a cultural critic's insight to his subject, and the result is a and authoritative account of the Beach Boys' visionary figure, who has emerged into a new era of creativity.

Catch a Wave: The Rise, Fall, and Redemption of the Beach Boys' Brian Wilson by Peter Ames Carlin
My rating: 4 of 5 stars

Catch a Wave: The Rise, Fall, and Redemption of Beach Boy’s Brian Wilson by Peter Ames Carter is a 2006 Rodale Books publication.

Who doesn’t love that fun, upbeat music of the Beach Boys? How can you deny Brian Wilson’s creative genius and contributions? But, who knew the extent of his suffering, the intense family drama, and tragedy that he endured?

I admit I didn’t always take the Beach Boys seriously, thinking their music was just fun, catchy, and made me feel good. Nothing wrong in that, but with maturity, I began to see things differently. However, even with a deeper appreciation of Brian Wilson, in particular, I can’t say I knew all that much about him. I had heard things about an abusive father, about his living in his room for years, and suffering from some kind of mental illness, but I never read any sort of biography about his life, or watched any documentaries about him or the Beach Boys.

But, when the film “Love and Mercy” came out, I had heard some very high praise for the film. I decided to check it out and was very impressed with it, and found the story so incredible, I began to search out a valid, trustworthy book about Brian’s life.

This book came highly recommended so I picked it out to start with. There are other books out there, as well, which might help piece things together more cohesively and maybe someday I’ll get around to reading those too. But to get an overall picture of Brian’s life, this book is a decent good place to start.


One thing I feel I should mention is that this book doesn’t focus solely on the period of time Brian was under Landy’s influence. This is a book that details Brian’s musical talents, his thought process, the dynamic between himself and the other members of the group, as well as a mention or two of Brian's marriages and children.

The book did not go into great depth with his intimate personal life, in fact, his first wife is mentioned only briefly, and the incredible story of how he met his second wife, it completely glossed over, and their adopted children are not mentioned either.

But, we are given some ideas about how Brian functioned in the studio, how difficult the album “Smile’ was to complete, what the many problems were recording it, the drug problems, the infighting, and how all of this effected Brian’s emotional .

However, this book is not as comprehensive as I would have liked, only briefly stopping along the way to touch on a point or discuss an event or situation, which only whetted my curiosity, not satisfying it, which is why I would like to find more reading material on Brian’s life, and maybe even the Beach Boys as a unit, too.

There is a lot of tragedy in Brian’s life, and it is terribly sad that the family is so ripped apart, that such bitterness exists between them, and continues to be a problem, even now. But, there is a lot triumph in these pages, as well.

Once diagnosed with serious mental health problems, suffering from physical health issues too, Brian, with the help of a few good people, was able to pull himself up from the ashes and live a relatively normal life. He finally got the recognition as an artist, he craved and deserved, releasing “Smile” to critical rants and raves, resurrecting his career and giving him the laugh last, so to speak.

Brian’s story is ultimately inspirational, because only he could do the work that was necessary to achieve his goals, and he had the will and strength to pull that off. He’s still eccentric, a little aloof, but considering everything I think he deserves the accolades and hopefully he has found peace and contentment in his life now.

This is a good book for someone like myself, that had very little knowledge of Brian’s life, giving the reader a pretty fair depiction of events, without bogging it all down with too much minutia. It’s an interesting outline of Brian’s life, a well organized peak into the life of one of the most creative and talented musicians out there. 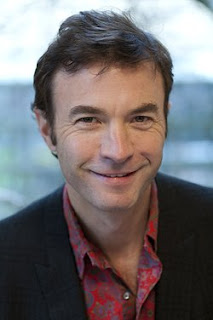 Peter Ames Carlin is a journalist, critic and author. Previously a writer, senior writer at People magazine and a TV critic for The Oregonian newspaper, his work has been published in the New York Times Magazine, the Los Angeles Times Magazine, the Times (UK), Men's Journal and the British music magazine, The Word.

A professional writer since 1985, Carlin has written about a wide variety of subjects. His 2009 investigation of financial and identity fraud conducted by TV news executive Jeff Alan spurred a federal investigation that sent Alan to federal prison. Still, Carlin's work has focused mostly on popular culture and music.

Carlin lives in Portland, Ore. his wife and three children.
Posted by gpangel at 12:30 AM