Killer in the Kitchen- A Murder, She Wrote Novel- by Jessica Fletcher & Donald Bain- Feature and Review 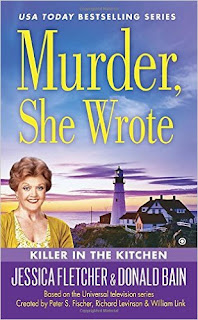 In the latest in the "USA Today" bestselling series, someone writes a recipe for murder.

Jessica loves the Leg & Claw restaurant, owned by young couple Brad and Marcie. And the restaurant is the dream come true. But when famed chef Gerard Pepe Lebeouf decides to open an eatery right next to theirs, tensions rise fast and hot and lead to a nasty confrontation between Lebeouf and Brad. So when Lebeouf is found dead with a knife planted in his chest, Brad becomes suspect number one. But plenty of others had a motive to kill Pepe, and up to Jessica to uncover who really added murder to the menu."

Killer in the Kitchen by Jessica Fletcher
My rating: 5 of 5 stars

There are plenty of twists and turns and surprising confessions that make this mystery especially puzzling. This installment is also one of the fasted paced stories I’ve encountered in the series, perhaps because I was so deeply absorbed in the mystery, I didn’t want to put it down.

I always try to catch the latest “Murder, She Wrote” mystery, and have enjoyed every one of them, although some are better than others, which is to be expected with over forty books in the series. But, I must say, this novel is one of the really good ones!

I recommend this book to anyone who loves mysteries, but especially for cozy mystery lovers or to those who enjoy TV tie-in novels. 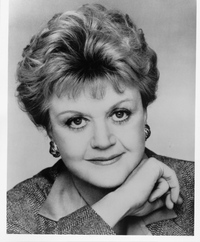 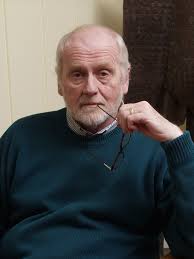 Donald Bain is the author or ghost/​author of more than 120 books, many of them bestsellers. They encompass both fiction and non-fiction, and include such categories as murder mysteries, westerns, comedies, investigative journalism, food, business, psychology and historical dramatizations. His autobiography, Murder HE Wrote: A Successful Writer's Life, published by Purdue University Press, is available everywhere(And is now an e-book through the publishing company, Hyphenates Books.)His novel, LIGHTS OUT!, a thriller with comic overtones, was published in the UK in February 2014, and in the U.S. May of the same year. It's the tale of a man unhappily married into a wealthy family who goes through a monumental male mid-life crisis that leads him into an affair with a beautiful Argentinean woman. In order to finance his escape into her waiting arms, this hapless former electrical engineer becomes an unlikely criminal that brings him into the world of organized crime, a scheme that quickly unravels and finds him being sought around the world by the authorities, the Mafia, and a private investigator hired by his wife and domineering mother-in-law. NY Times bestselling author Michael Palmer said of LIGHTS OUT! "Donald Bain has a wit and sense of fiction that I have encountered only in Elmore Leonard's best stuff." And multiple award winning author Hank Phillippi Ryan commented, "Stylish, wry, droll and surprising." He worked closely with bestselling author Margaret Truman for many years on her bestselling series of thrillers set in Washington, D.C., and continues to write novels in Margaret Truman's Capital Crime series after her death. In 2011MONUMENT TO MURDER was published, followed in 2012 by EXPERIMENT IN MURDER, which carries his bylineUNDIPLOMATIC MURDER, also by him, will be published in July of 2014, and INTERNSHIP IN MURDER will be released in 2015. Among his books, the airline comedy,  or Me?, published more than 40 years ago, together with its sequels sold more than 5-million copies worldwide and was the basis of a television movie-of-the-week. In 2003, Penguin Books republished it as a "Penguin Comedy Classic." 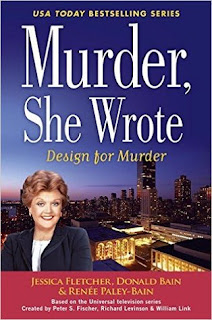 The new "Murder, She Wrote" novel, DESIGN FOR MURDER, will be published this April. It takes Jessica to New York City for its fabled "Fashion Week" where a former Cabot Cove designer with big ideas butts heads with the industry's top guns. Naturally, a body or two shows up amidst all the glitz and glamour including a young, aspiring runway model, and Jessica ends up having more on her mind than the latest fashions. And the 29th entry in the bestselling Margaret Truman Washington-based series of mysteries/thrillers, DEADLY MEDICINE, will be available in late spring. The development of a new pain medication without side effects sets off a deadly race to profit from the medication, and takes Mac and Annabel Smith, and private investigator Robert "Don't Call Me Bobby" Brixton on a quest that spans the globe from Papua New Guinea to Washington, D.C. Millions of dollars are at stake; so are the lives of those destined to the beautiful daughter of the drug's discoverer, his former lab assistant, and a member of Congress.