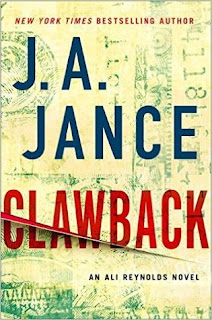 ABOUT THE BOOK:
In New York Times bestselling author J.A. Jance’s latest thriller, Ali Reynolds faces her most controversial mystery yet, solving the murder of a man whose Ponzi scheme bankrupted hundreds of people, and left them seeking justice…or revenge.

When Ali’s parents lose their life savings to a Ponzi scheme, her father goes to confront his long-time friend and financial advisor, only to stumble into the scene of a bloody double homicide. With her father suddenly a prime suspect, Ali and her husband work to clear her father’s name, while at the same time seeking justice for her parents as well as the scheme’s other suddenly impoverished victims, one of whom is a stone cold killer.

Clawback by J. A Jance is a 2016 Touchstone publication.

This eleventh installment in the Ali Reynolds series charged from the gate with a harrowing situation involving Ali’s father, Bob, who discovers a double homicide and is arrested for the crime. But, what is really bothering Bob isn’t his trouble with law enforcement, it’s the Ponzi scheme that has cost him and his wife their life savings that has him feeling heartsick.

Can Ali track down the real killers and recover some of her parent’s money in the process?

Because I’ve come to know these characters I really felt sorry for Ali’s parents, Bob in particular, who really came down on himself pretty hard. I could feel his age creeping up on him as he carried a tremendous weight on his shoulders. Ponzi schemes are such a personal affront, and is one of the worst kind of selfish crimes, which hurts everyone, but really hits the elderly hardest, since they are often forced back into the work force at a time when they should be enjoying retirement without financial worries.

But, Edie is still a hoot, though, and supports Bob from start to finish only complaining when he drove her car.

The mystery is not all that much of a mystery, since it is obvious who the killer is, but it is the suspense comes from Ali’s search for the truth and her hope of recovering her parent’s hard earned money, thus putting herself and perhaps others in danger. I enjoyed the complexities and details in this story, especially the technical parts, which gave my brain a little something to chew on, but there is no shortage of action.

This story gave all the characters a chance to shine, although B. seemed a little left out of the loop in this one and he and Ali didn’t have their usual chemistry.

Still, this a fast paced addition to this beloved series, and drew me in a little closer to the characters, and gave me a new insight into Bob and Edie’s life, and a chance to get better acquainted with some of the other characters, especially Cami, who steals the show a little bit. Overall, I highly recommend this one to fans of the series. I don’t think you will be disappointed.

A WORD FROM JA JANCE ABOUT CLAWBACK 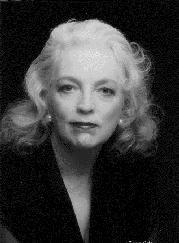 Judith Ann Jance is the top 10 New York Times bestselling author of the Joanna Brady series; the J. P. Beaumont series; three interrelated thrillers featuring the Walker family; and Edge of Evil, the first in a series featuring Ali Reynolds. Born in South Dakota and brought up in Bisbee, Arizona, Jance lives with her husband in Seattle, Washington, and Tucson, Arizona.