Forever With Your by Heatherly Bell - Release Blast + Giveaway 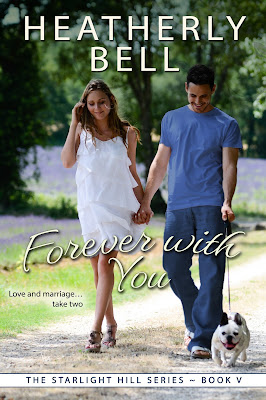 She forgot something on the way to the courthouse …

Sophia Abella has a good life, even if she is a little stuck.  Not quite single, not quite married, she keeps men at a safe distance. But when her ex-Marine husband returns to town and takes the job of chief of police, it might finally be time to get that paper work done once and for all. After all, most of her family already thinks she’s divorced.

They’re not actually, in the fullest sense of the word … divorced.

Years ago, Riley Jacobs chose the Marine Corp over his wife and has regretted his decision every day since. But once a Marine always a Marine, and he’ll use every tactical advantage he has to get Sophia to realize that she’s the only one for him.

When early onset stage fright dashed dreams of Rock and Roll Hall of Fame status, Heatherly tackled her first book in 2010, and now the people and voices that occupy her head refuse to leave. She no longer sings unless you count randomly bursting into song to annoy her children (and the dogs).

If she were not an author, Heatherly maintains she would be a detective and a criminal's worst nightmare. She watches Dateline every Friday night and takes notes.