Forbidden Nights With The Viscount by Julia Justiss 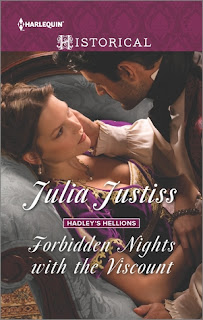 ABOUT THE BOOK:
After suffering the loss of her beloved husband, quick-witted Lady Margaret Roberts has sworn off the pursuit of passion…that is, until she meets Giles Hadley.

Bitterly estranged from his family, reluctant viscount Giles knows all too well the devastation of an unhappy marriage. So while he is prepared to indulge in an illicit affair, he must beware, for spirited Maggie awakens in him something even more forbidden—the desire to claim her as his wife!

Forbidden Nights with the Viscount by Julia Justiss
My rating: 4 of 5 stars

Forbidden Nights with the Viscount by Julia Justiss is a 2016 Harlequin Historical publication. I was provided a copy of this book in exchange for an honest review.


The topic of this book comes at a timely fashion, since many of us have politics in our minds at the moment. In this case, the author explores the notorious opposition between the Tories and the Whigs.

The intelligent and beautiful Lady Margaret supports her father’s Tory party and her hosting duties have not gone unnoticed. She enjoys her role, which keeps her busy and her mind off the tragic loss of her husband. She has no intention of remarrying, but feels restless. The chance meeting with a political rival, Giles Hadley, awakens Margaret’s senses, which have lain dormant for far too long.

Giles is a Viscount, who will eventually inherit his father’s title, but, doesn’t believe marriage is for him due to the immense scandal surrounding his parent’s marriage, which was very sad. However, when the Lady Margaret suggests they enter into a liaison, Giles finds himself rethinking his position on that subject.

However, Giles’ half-brother is more suited to Lady Margaret due to their like-minded political stance, and he is aggressively pursuing her. Can Giles win the lady’s heart despite their differences? Can he convince her their torrid affair has deeper possibilities?


This story starts off on a slightly humorous and charming note, with the sudden and unexpected introduction Giles and Margaret have to one another, and the instant sparks that fly between them. I loved Margaret’s attitude and her refusal to obey certain protocol when it came to entering into a dalliance with Giles. She knew what she wanted and she pursued it, while most ladies in this time period would never have even entertained such a thought. Although, Margaret is a delightful and gregarious character, in the beginning she has an aura of sadness surrounding her. However, Giles will soon have her feeling the strength to heal and will give her a reason to want to move forward at long last.

Giles’ story was very sad, indeed, and I was happy to see him finally receive the validation he deserves. It was so fun watching him react to Margaret and seeing him fall completely under her spell. He never knew what hit him.

Often times I find that in the beginning of a book, I struggle with one or sometimes both the protagonist, but in this case, I loved them both immediately and only grew to like them more as the story progressed. However, this story has a bit of a bite to it, with a romantic suspense element tossed into the mix. I found myself holding my breath as things got a little intense a time or two.

I don’t know if it was just me, but I think this story is just a little saucier that some I’ve read from this author, but I thought it worked in this case because we aren’t dealing with an innocent virgin, but with two consenting adults who agree to a ‘no strings attached’ arrangement. However, the tension does build a little at a time, tantalizing and teasing the reader.

Overall, this an easy read, moving at a steady pace, with a few heart pounding moments, and a healing and heartwarming family side story, and of course the unlikely romance between two people with opposing views who wind up falling in love, giving us a sweet and spicy romance that will leave you smiling at the end. To relax, she enjoys watching movies, reading (historical fiction, mystery, suspense) and puttering about in the garden trying to kill off more weeds than flowers.
Posted by gpangel at 1:00 AM