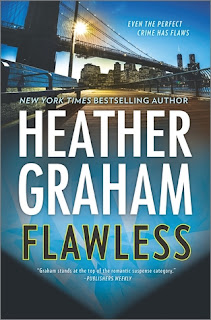 ABOUT THE BOOK:
Everyone goes to Finnegan's…

It's a pub in lower Manhattan, run by the Finnegan family for generations and now owned by Kieran and her three brothers. Kieran Finnegan, who still works there whenever she can, has become a criminal psychologist—a fitting reaction, perhaps, to her less-than-lawful .

Meanwhile, New York's Diamond District has been hit by a rash of thefts. No one's been killed—until now. FBI agent Craig Frasier is brought in to investigate; he and Kieran meet at a jewelry store in the middle of a heist. She's there to "" a flawless stone taken by her light-fingered youngest brother as an act of vengeance. He's there to stop the gang.

But the police and FBI soon discover that there are two gangs of diamond thieves, the original and a copycat group of killers. And the second group seems to think their scheme is as flawless as the stones they steal.

Thrown together by circumstance, drawn together by attraction, Kieran and Craig both end up working on the case. Unfortunately, there's more and more evidence that, somehow, the pub is involved. Because everyone goes to Finnegan's…

Flawless by Heather Graham
My rating: 4 of 5 stars

Flawless by Heather Graham is a 2016  MIRA publication. I was provided a copy of this book by the publisher and Edelweiss in exchange for an honest review.

Is it just me, or does it seem like it’s been a really long while since Heather Graham has released a standard romantic suspense novel? Since I’ve begun to shift away from the PNR genre, I have lost touch with this author, so I’m happy to see she is starting a new series which focuses more on traditional mystery and suspense.

Immediately, I was sucked into the setting of the family owned Irish pub in New York City. The Finnegan clan has gone through some tough times, but Kieran has just begun her first job as a criminal psychologist, while still helping out in the pub from time to time. Her brothers, who have , are separating themselves from their previous criminal activities in favor of earning an honest living, or at least we hope they are. However, in the name of honor, one of her brothers and her best friend, Julie, pull a risky and illegal move that forces Kieran to right their wrong, which plunges her headlong into the dangerous world of diamond heists.

This is a very unique story with equal balance of action, mystery, suspense, and romance. I really liked the big Irish family and how they work together and stick together. I also thought the intrigue was well plotted with a few very surprising twists along the way. The only weak spot for me was with the romance, which seemed forced, without a lot of build-up, and no emotional connection. The secrets Kieran keeps even after all is said and done left me feeling like there was a loose end that needed to be tied.

Other than that, the story is solid and fast paced, with well-developed characters, and great supporting cast, that I hope will get their own story someday.. Danny and Julie?

Heather Graham is an experienced author who writes across many sub-genres, but for me her historical romances and her romantic suspense series are where she really shines. This book is a fine example of that. Recommended for fans of romantic suspense and mystery/thriller readers.

New York Times and USA Today best-selling author Heather Graham majored in theater arts at the University of South Florida. After a stint of several years in dinner theater, back-up vocals, and , she stayed home after the birth of her third child and began to write, working on short horror stories and romances. After some trial and error, she sold her first book, WHEN NEXT WE LOVE, in 1982 and since then, she has written over one hundred novels and novellas including category, romantic suspense, historical romance, vampire fiction, time travel, occult, and Christmas holiday fare. She wrote the launch books for the Dell's Ecstasy Supreme line, Silhouette's Shadows, and for Harlequin's mainstream fiction imprint, Mira Books.

Heather was a founding member of the Florida Romance Writers chapter of RWA and, since 1999, has hosted the Romantic Times Vampire Ball, with all revenues going directly to children's charity.

She is pleased to have been published in approximately twenty languages, and to have been honored with awards Waldenbooks. B. Dalton, Georgia Romance Writers, Affaire de Coeur, Romantic Times, and more. She has had books selected for the Doubleday Book Club and the Literary Guild, and has been quoted, interviewed, or featured in such publications as The Nation, Redbook, People, and USA Today and appeared on many newscasts including local television and Entertainment Tonight.

Heather loves travel and anything have to do with the water, and is a scuba diver. Married since high school graduation and the mother of five, her greatest love in life remains her family, but she also believes her career has been an incredible gift, and she is grateful every day to be doing something that she loves so very much for a living.