Barefoot with a Bad Boy by Roxanne St. Claire- Feature and Book Review 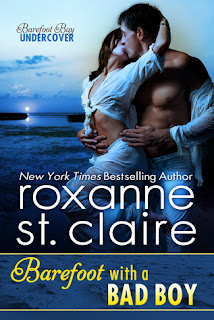 A man who trusts no one is forced to believe the unbelievable...

For years, former spy Gabriel Rossi has been secretly searching for CIA linguist Isadora Winter, a woman he loved and lost long ago. But recently, he learned of her untimely death in an accidentand death of her son named Gabe. Angry, hurt, and uncertain of his next move, Gabe is stunned when a woman he's never met approaches him on the beach and claims to be Isadora. She doesn't look, act, or talk like his beloved Isa, but she knows things about their past that only a lover could know, and she assures him that his son is alive as well. As much as he wants to believe her and knows that in the spy world, anything is possible, doubts and distrust plague him. Still, he sees glimmers of the woman he once knew through and she begins to melt his hardened heart.

A woman who is tortured by emotions must endure the pain of love...

Lila Wickham has been working deep undercover for so long that sometimes she's forgotten who she really is. Now that her assignment is over and the surgeries she endured left her utterly changed, she is determined to fix the broken life she left behind and assure that her little boy is safe. With lingering threats from an unknown source and blinding headaches that torment her whenever she feels deep emotion, she seeks Gabe Rossi for help and protection. But instead of setting her up with a new undercover identity, he insists on luring her nemesis to Barefoot Bay so he can end the threat to Lila and her son once and for all.

Can they survive the worst betrayal of all?

Even if they succeed in drawing out the killer who has Lila in his sights, a much more serious threat hovers over thema treacherous, deadly truth that could not only destroy their love but end their lives as well.

Barefoot with a Bad Boy by Roxanne St. Claire
My rating: 5 of 5 stars

Barefoot with a Bad Boy by Roxanne St. Claire is a 2016 publication. I was provided a copy of this book in exchange for an honest review.

I have enjoyed every one of the books in the Barefoot Bay series. I like that you can read them in order or not, read the trilogy arcs, or the entire long running series, this being the fourteenth installment.

In this story, Gabe Rossi, is the hero who lost everything he ever wanted when his beloved Isadora left him for an undercover assignment, never to return. If this were not heartbreaking enough, he found out he was a father, but the child had died before he was able to locate him.

Now five years later, as his family celebrates Christmas, Gabe meets a woman who claims to be Isadora. Only she calls herself Lila, and looks nothing like the woman he loved all those years ago. She claims Gabe’s son, is also still alive, and if Gabe wants to see him, he will have to trust her.

Caught between wishing this woman was his long lost Isadora, and being unable to believe her incredible story, or trust her, Gabe must make some hard choices and do whatever he can to keep his son safe.


Spy stories can be a hit or miss with me sometimes. I love the intrigue, the action, and the suspense, but at times the plot lines are just too outrageous, with all those convenient gadgets and over the top dialogue. But, when it comes to romantic suspense, the spy game is always a nice fit.

In this case, I had no idea if any of the situations detailed about Lila’s transformations were realistic or not, but I figure this type of thing probably goes on, at least to some extent. So, do we trust Lila? Is she really Isadora? Is she playing Gabe? The questions were many, and the murky details of Lila’s undercover days do nothing to quell the uneasiness I felt about her sudden reappearance and what her agenda might be.

For a long time, I was solidly in Gabe’s corner, feeling all the intense emotions he was struggling with, worried he was in danger or about to get his heart broken. Naturally, Lila was a much tougher sell, since her trademark is the cold outer shell she uses to play the part of Lila. Her struggles are hard to understand at times, as she fights to find her true identity, guard her health, and keep her son safe and happy. I can’t say I warmed up to her the same way I did with Gabe, as her progress is slow as molasses, and the truth hangs in the balance so long I couldn’t make myself totally believe in her.

I did guess, at least partially, who might be behind some of Lila’s issues, but was blown away at what transpired, in the fast paced, white knuckled, . Wow! Did not see that coming.

So, as you can tell, the story is complicated, but very absorbing, moving along with a precision pace that realistically builds the suspense and the romance. While the spy game and all its complexities are a huge part of the story, ultimately this is one of the most unique second chances at love stories I’ve read in a while. The ending is swoon worthy romance at its finest, with Gabe finally able to grab his elusive HEA.

Overall, this is another stellar heart pounding novel of suspense, as well as a unique and original romance. This is simply one of the best series out there in this genre and I can’t recommend it highly enough. 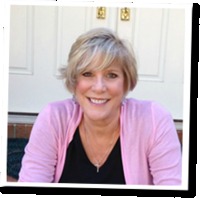 I don’t know about you, but when I check out an author's bio, it’s usually because I’ve read a book I liked and wondered about the person behind it. Let's skip the formal and I'll give you the inside scoop on who Roxanne St. Claire really is.

First of all, call me Rocki. Everyone does. Evidently, when my mother brought me home from the seemed too scrawny and small to pull off “Roxanne” (she’d read Cyrano de Bergerac while pregnant or I would have been Judy) so they called me Rocki.

I grew up in Pittsburgh, PA, the youngest of five (overachievers, every one), and fell in love with words and stories the summer I read Gone With The Wind. That year, for my twelfth birthday, my parents gave me a typewriter (with italic font – it was the coolest thing) and from that day on, I’ve had my fingers on a keyboard, pounding out love stories for fun. My AP English teacher taught me the two most important lessons an aspiring author ever needs: 1) verbs are the key to life and 2) a writer should get a real job. After attending UCLA and graduating with a degree in communications, I tried acting and television broadcasting. Oh, they aren’t real jobs? I learned that the hard way. I changed my last name from Zink to St. Claire because a news producer told me Roxanne Zink had too many harsh consonants for a TV personality – apparently Katie Couric didn’t get the memo. I got some fun gigs, and even met Tom Hanks when I did a guest appearance on Bosom Buddies. I liked camera work, but wasn’t too crazy about starvation, so I moved to Boston and got that “real” job. In fact, I placed my foot on the bottom rung of the corporate ladder and didn’t look down until I’d climbed all the way up to the level of Senior Vice President at the world’s largest public relations firm. On the way up, I met the man of my dreams in an elevator. Two years later – in the same elevator! – asked me to marry him and I wisely said yes.

I stayed in PR, moved to Miami, had a few babies, lost my home in a hurricane, built another one a few hours north and all along, I kept writing my “stories” for fun. One night, I read a particularly fabulous romance novel that changed my life for good. That night, I decided I wanted to make someone else feel as whole and happy as that author made me feel. (Everyone asks! It was Nobody’s Baby But Mine by Susan Elizabeth Phillips.) With two small children and one big “real” job, writing my first novel wasn’t easy, but I did finish a manuscript that managed to get the attention of a literary agent. She told me to do one thing and one thing fast: write another book. (The first one is usually a “learner” book, honestly.) That second manuscript sold to Simon & Schuster’s Pocket Books and was released in 2003 as Tropical Getaway. Since then, I’ve written almost thirty more, in multiple genres, and long ago replaced the corporate ladder with the of publishing as a full-time novelist. Finally, writing is my real job.

Today, I live in a small beach community in Florida with my husband and our two teenagers, and one spectacular Australian Terrier named Pepper. When I have spare time, I spend it with my family, but also dig in the dirt with my plants, travel for business and fun, hang out with my many writer friends, and, of course, I love to read. I’m still crazy about words and stories and hope to write at least a hundred books in my lifetime. And, yes, verbs are the key to life. My favorites? Love. Work. Play.
Posted by gpangel at 1:00 AM