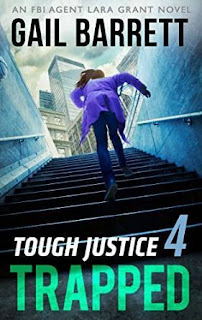 ABOUT THE BOOK:
Can they get out of this investigation alive?

Special Agent Lara Grant's team are racing against the clock to prove infamous crime boss Moretti is behind a recent series of murders. With each lead ending up in a body bag, Lara's trapped by the weight of her own guilt. How many would still be alive if it weren't for her troubled history with the villain?

But he won't quit, so neither can Lara. The sniper is the key to finding the link between Moretti and the current cases. But before they can reach him, Moretti hits closer to home than Lara could have imagined…

Trapped by Gail Barrett
My rating: 4 of 5 stars

This chapter has some wild mood swings with Lara’s deeply troubled psyche, Nick’s troubled past, and Moretti’s continued mind games, but there is a also a huge break in the case, which added a sense of euphoria to the story. But, don’t get caught up in the celebrations. A battle has been won, but the war is far from over.
Another nice installment in this e-series, which I have been enjoying immensely. Remember, these must be read in order and are part of an eight -part series. This is for fans of crime stories and romantic suspense.

The nuns in my Catholic elementary school always said that each of us has a gift, a reason we were put here on earth. Our job is to discover what that purpose is. Well, I knew early on that I was meant to be a writer. Who else would spend her childhood grinding sparkling rocks into fairy dust and convince her friends it was real? Or daydream her way through elementary school, spend high school reading philosophy and playing the bagpipes, and then head off to Spain during college to live the writer's life?

After four years in Madrid I straggled back home, broke but fluent in Spanish, and discovered that I'd acquired a marketable skill. So instead of writing, I began teaching Spanish. I also married a Coast Guard Officer and followed him around the country as he rescued ships and saved lives.

The years passed. We had two sons. I earned my master's degree and continued teaching, which I really enjoyed. We met interesting people and acquired a quirky dog.

But the desire to write kept lurking in my mind. That was my dream, what I knew I'd been destined to do -- and yet, I had never done it. Then one day I made a decision. If I wanted to become a published author, I had to stop fantasizing about writing and actually do it.

So I began my first book –- and discovered that writing a saleable novel was much harder than I'd dreamed. Fortunately, I inherited a healthy dose of Irish stubbornness, a strong mid-western work ethic and a love of challenges that helped me persevere.

So here I am at last, just as the nuns instructed and right where I hoped I would be –- writing stories about characters struggling along their own paths of self-discovery. I hope you enjoy their journey home.
Posted by gpangel at 10:00 AM