The Rock by Moncia McCarty- A Highland Guard Novel

ABOUT THE BOOK:
New York Times bestselling author Monica McCarty continues her Highland Guard series in this eleventh steamy historical romance set against the sweeping backdrop of the Scottish Highlands.

The first time he caught sight of Elizabeth Douglas, Thomas MacGowan thought she was a princess. To the son of the castle blacksmith, the daughter of the powerful Lord of Douglas might as well be. When it becomes clear that his childhood companion will never see him as a man she could love, Thom joins Edward Bruce’s army as a man-at-arms to try to change his lot. If he’s harbored a secret hope that he could close the gap between them, he faces the cold, hard truth when Elizabeth comes to him for help. She might need the boy who used to climb cliffs to rescue her brother from the hands of the English, but she would never see the son of a smith as a man worthy of her hand.
READ A SAMPLE:

The Rock by Monica McCarty
My rating: 4 of 5 stars

The Rock by Monica McCarty is a 2015 Ballantine publication. I was provided a copy of this book by the publisher as an XOXpert, the official street team of XOXO After Dark.
(http://xoxoafterdark.com/)

This eleventh installment in the Highland Guard series starts off like a sweet fairy tale when Thomas McGowan becomes friends with Jamie and Elizabeth Douglas as children. Although Elizabeth was only six years old, she proclaimed that one day she was going to marry Thom. But, as they grew up, Thom’s feelings toward Elizabeth became clear to her brother. The two men argued and Elizabeth was sent away.

Why? Well, Thom is the son of a blacksmith and Elizabeth is a princess. The class distinctions were too great to overcome. But, Thom always believed in Elizabeth, always knew she would return and they would have their happily ever after.

Well, Elizabeth does return, but his plans and hers couldn’t be more different. Bitter, and angry, Thomas sets out to become a Knight and better himself. His goal is to show Elizabeth he is worthy of her. But, is she worthy of him?

The Highland Guard series is one the very best Historical Highlander series in my opinion. As I have stated countless times, the attention to detail is next to none. It's as historically accurate as is possible, is well written and researched. I have yet to read a book from this series that didn’t wow me.

But, I have to confess, I struggled with this one quite a bit. Elizabeth is the most obtuse protagonist I’ve encountered in a long while. I do understand the girl knew her lot in life and can even see how it was possible she never thought of Thom in a romantic way. She even admitted she was not the romantic type, and of course, she knew all along a marriage with him was impossible, so she never entertained such notions.

But, surely she knew he was in love with her! I know young women in those days were sheltered and naïve, but I felt she toyed with his feelings, led him on, and used him. Why else would Thom be so very positive she returned his feelings?

After Elizabeth stomps all over Thom’s heart, in almost the same breath, she actually has the nerve to ask if they can go back to being the best of friends, like they were before, as though people can turn their feelings on and off like a light switch. That’s the type of thing that made it hard to warm up to her. I was outraged by her insensitivity to Thom’s feelings.

Thom on the other hand is a romantic, but maybe he was deluding himself a little too, and was partly responsible, by setting himself up for a fall. He was aware she was a princess and to believe that when push came to shove she would disobey her brother, shirk her duty as a princess, and risk poverty to marry for love, was just asking for heartbreak. Yes, it sounds romantic, but logically, it seemed impossible. Still, of the two, I admired Thom the most. The man has principles, believes in himself, in love, in right and wrong, and well, if I had been Elizabeth, and found out Thom loved me, I would go weak in the knees, and I think being poor with Thom would be a much better fate that being rich, a trophy, and never knowing real love or passion. But, that’s just me and of course times were very, very different in medieval Scotland.

So, this couple puts us on an emotional roller coaster. Elizabeth puts Thom through the ringer, constantly drawing him into her snare, then pulling back, then begging to be forgiven, making Thom love her, then hate her.

So, does Elizabeth ever redeem herself and prove she is worthy of Thom? Well, for Thom’s sake, I will give her the benefit of the doubt. She does finally wake up and the course she takes is indeed very risky and could come at a very high cost to her, and is all done in the name of love.

I have to be completely honest and say that I didn't love this one as much a the other books in the series, but it turned out to be an enjoyable read, although it did take me a long time to warm up to Elizabeth, and even then it was grudgingly, but the writing and historical details are top notch as always, and I was engaged in the story, and although Thom is kind of the new kid on the block, he saved the day, and the story for me. I really liked him and am happy I got to meet him and was happy he got his happily ever after.

COMING THIS MAY- DON'T MISS THE NEXT EXCITING ADVENTURE IN MONICA 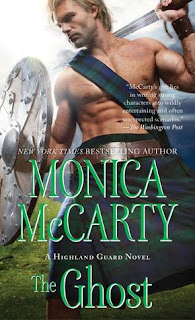 PRE-ORDER YOUR COPY HERE:
http://www.amazon.com/Ghost-Highland-Guard-Book-12-ebook/dp/B0176M3UE2/ref
ABOUT THE AUTHOR: 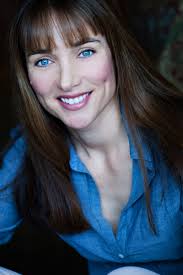 And how did I end up writing romance? It’s not as divergent as it seems. What I loved about being a lawyer are the same things I love about being a writer—research and writing. The only thing missing is the arguing, but that’s what a husband and kids are for, right?
VISIT HER WEBSITE AT:
http://www.monicamccarty.com
Posted by gpangel at 1:00 AM