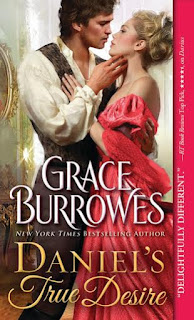 An honorable life
Daniel Banks is a man of the cloth whose vocation is the last comfort he has left-and even his churchman's collar is beginning to feel like a noose. At the urging of family, Daniel attempts to start his life over as vicar in the sleepy Kentish town of Haddondale, family seat to the earls of Bellefonte.
Challenged by passion
Lady Kirsten Haddonfield has resigned herself to a life of spinsterhood. Then the handsome new village vicar, Reverend Daniel Banks, becomes a guest of the Haddonfield family while the vicarage is being renovated, and Kirsten finds herself rethinking her position. Lady Kirsten does not know that Daniel's past is about to cast a shadow on love's future.
Excerpt from Daniel’s True Desire
Daniel Banks is the new vicar in Haddondale, temporarily a guest of Lady Kirsten’s family. They’ve dragooned him into tutoring some of the local boys, and Kirsten is managing the staff who’ll turn the dower house into a place of learning. What Daniel doesn’t know is how a married man, even one estranged from his unworthy spouse, can resist the allure of friendship with Lady Kirsten…
“I dread crossing the garden,” Lady Kirsten said. “Susannah has taken up reading old issues of La Belle Assembleé, Della is memorizing DeBrett’s, and the countess talks only of fashion. Nobody does anything.”
“Most would envy them their idleness,” Daniel said, though he did not. The earl gave a good account of himself, tending to significant acreage and mercantile interests, but the women were bored.
One of the women was mortally bored, though never boring.
“I want to take the vicarage in hand,” Lady Kirsten said, marching from the pantry. “I doubt I’ll have time before we leave for Town the week after next. Lemon and beeswax won’t cure rising damp any way.”
Nothing cured rising damp save for replacing every scrap of affected wood. “You’re leaving soon, then?”
The prospect of distance from Lady Kirsten should have been a relief. She was unconventional, discontent, and unpredictable. Worse yet, she was patient with small boys, had a strong streak of domestic competence, and could not dissemble even to appease appearances.
Most troublesome of all, Daniel liked her. A lot.
“I smell fresh bread.” Lady Kirsten’s pace increased, then she halted to twist a sachet from behind a curtain. “Nicholas told George that in addition to Digby and the Blumenthal brats, you’re to take on both of Squire Webber’s sons. He aspires to send them to public school, but they lack a foundation.”
And years of dedicated tutors had been unable to remedy that lack? “I think you had better join me for lunch,” Daniel said resuming their progress toward a hot meal.
“I believe I shall. I adore a hearty beef stew with bread and butter on a cold, rainy day. Cook uses Mama’s recipe, and I’m partial to it.”
Peasant fare, for an earl’s daughter. Daniel liked her entirely too well.
A scullery maid set places for them at a wooden table heavy enough to double as a threshing floor, while Lady Kirsten served up bowls of steaming stew and Daniel sliced the bread. Daniel held the lady’s chair, and then, without even a nod in the direction of further small talk, took shameless advantage of his companion.
“I want to know every detail you can share about my scholars, Lady Kirsten. They’re shaping up to be a pack of ne’er-do-wells, scamps and scapegraces. One wonders if the parish isn’t attempting to run me off rather than welcome me.”
She snapped her serviette across her lap. “They’re out and out rotters, every one save for Digby, but George says he’s showing dubious potential. Don’t steal all the butter.”
Daniel passed her ladyship the plate of butter, small golden molds in the shape of roses.
“Your butter, and Lord-we-thank-Thee-for-this-food, amen. Now tell me about these scoundrels.”
Lady Kirsten sat back, her smile indulgent. “I’ve known them since they were babies, Mr. Banks. They’re full of energy and mischief, and there’s not a Latin scholar among them. They are truly, truly awful.”
She loved these rotten boys, and—greatest possible inconvenience—Daniel regarded this her most attractive quality of all.


Message From the Author
The Joys of True Gentlemanliness… by Grace Burrowes
About twenty books ago, I lamented (whined) to one of my brothers that coming up with ways to challenge a romance hero into facing his worst fears and risking all to win the heroine’s heart was taxing my imagination. My brother, without a heartbeat’s pause said, “Make him choose between the competing demands of honor.”
THAT was great advice. Make the hero choose between the woman who needs him, and the military unit depending on him. Make him choose between avenging injustices from his past, or respecting the wishes of the pacifist woman he loves. Make him decide whether to be publicly vindicated or privately forgiving… Delightful stuff, for an author!
And yet, to travel along these brilliant character arcs, our hero must have one characteristic: He must have a well-developed sense of honor. To me, that means this fellow must be honest and kind. He can be poor, grouchy, lacking in charm, without prospects, unlucky in love—Daniel Banks is nodding his head—but ideally, he will still be a true gentleman at heart.
The true gentleman, alas for him, can be tormented from page one by the author and by the story, but from the start, the true gentleman will play by the rules of decency.
Rules are tough. The true gentleman will never misrepresent himself, which means Daniel Banks must inform Lady Kirsten that a) he’s married, and b) he won’t disrespect his vows. Too bad for Daniel, this honesty only raises him in the lady’s esteem, when he’s trying to emphasize his unsuitability.
The true gentleman will lend a hand—or an ear—to those in need. When Daniel Banks realizes that Lady Kirsten has been overlooked by her entire family, and is as lonely as an earl’s daughter can be, the least he can do is listen when she explains the misery in her past. Again, his respect for, and understanding of her increases, but what else could a gentleman have done?
The true gentleman is kind. He does not ignore the suffering of others, even if that means, he’s left with a bigger helping of suffering on his own plate. When Lady Kirsten needs a champion to fight her battles with an overbearing brother, Daniel steps up, though it might cost him his position. Once again, Daniel’s decency only gets him in hotter water, because now Kirsten’s brother is also viewing the impecunious, reserved, sometimes grouchy, vicar with renewed respect.
This business of being a true gentleman is darned hard, and darned heroic. What Daniel has to learn, though, is that true gentlemanliness begins at home. When he’s honest with himself, and shows himself the compassion we all deserve, all the inconvenient rules, tough choices, and honorable standards turn out to have been his second-best friends.
Lady Kirsten is, of course, his very best friend, being a true lady. But that’s another story…

Daniel's True Desire by Grace Burrowes
My rating: 5 of 5 stars


Daniel's True Desire by Grace Burrowes is a 2015 Sourcebooks Casablanca publication. I was provided a copy of this book by the publisher and Netgalley in exchange for an honest review.

It's always a pleasure to pick up a novel by Grace Burrowes. This one, however, was really, really, really good. ( I know, I say that every time, but I really mean it, every time)

As the story starts off we are introduced to Daniel, a Vicar, on his way to his new post. Upon arrival, he meets the most refreshing of ladies, Lady Kirsten Haddonfield. The two immediately forge a bond, each carrying burdens the other can relate to, but the trouble is, Daniel is married.

Now, I know what you are thinking. An extramarital affair is scandalous under normal circumstances, but a Vicar? Well, as it turns out, Daniel's wife is not all she presents herself to be, and they have been estranged for nearly a year. Still, the emotional affair between Kirsten and Daniel pushes the envelope just a little, and I felt Grace was taking a bit a risk with this scenario, but she does tread lightly, even if some actions by the characters may have raised a few eyebrows.

I loved getting a glimpse of the characters we have read about previously, the side story involving Daniel's ward, and the sweet romance that develops between Kirsten and Daniel, which leads them to uncover a ruthless and greedy scandal and gives them both a fresh path in life, as well as the fruition of dreams they never thought would come true.

This story is very well written, with the author delicately handling some prickly situations, although I did wonder if maybe the couple should have handled the situation in a more traditional way. Still, the sensual details are not gone into in explicit detail, and this is fitting, I think, for this particular story.

There are some tense moments and some surprising twist along the way, which kept me very involved in the story, and the deeper I delved into it the better it got. Everything you have come to expect from this author is here- humor, wit, sharp dialogue, emotional story lines, true love, and of course a wonderful and sweet happy ever after… so what's not to like? 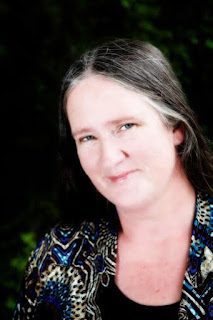