Everything I Left Unsaid by M. O'Keefe- Blog Tour + Giveaway 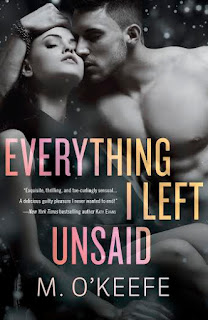 EVERYTHING I LEFT UNSAID Synopsis:


Fans of Jodi Ellen Malpas, K. Bromberg, and Joanna Wylde will be unable to resist this sexy, deeply intimate tale of a woman running from her past, and the darkly mysterious man who sets her free.

I didn’t think answering someone else’s cellphone would change my life. But the stranger with the low, deep voice on the other end of the line tempted me, awakened my body, set me on fire. He was looking for someone else. Instead he found me.

And I found a hot, secret world where I felt alive for the first time.

His name was Dylan, and, strangely, he made me feel safe. Desired. Compelled. Every dark thing he asked me to do, I did. Without question. I longed to meet him, but we were both keeping secrets. And mine were dangerous. If I took the first step, if I got closer to Dylan—emotionally, physically—then I wouldn’t be hiding anymore. I would be exposed, with nothing left to surrender but the truth. And my truth could hurt us both. 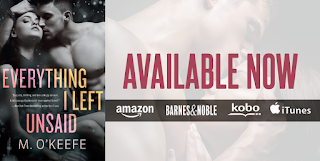 Everything I Left Unsaid by Molly O'Keefe
My rating: 5 of 5 stars

Everything I Left Unsaid by M. O'Keefe is a 2015 Random House publication. I was provided a copy of this book by the publisher and Netgalley in exchange for an honest review.


Sometimes it simply comes down to this: READ THIS BOOK! I promise you will find it absorbing, scorching hot, relentless, and suspenseful, and will leave you gasping, breathlessly wanting more.

Annie is one of those truly inspiring characters, a woman who has never been off the family farm in Oklahoma, knows very little about the world at large, but she has a survivor's instinct that screams into her ears, telling her to get the H out Dodge before it's too late… so she leaves her abusive husband, still bearing the marks of his hands around her bruised neck. She winds up in a trailer park filled with other kindred spirits who have graduated from the same school of hard knocks as Annie.

Once she steps inside her trailer, the oddest thing happens… a cell phone stuffed between some cushions starts to ring... Should she answer it?

A phone call will change Annie's life, and open up a whole new world of sensations, giving her a taste of real pleasure, and a renewed outlook on life. From the first moment she hears his voice, she leaves behind “Annie's” bleak surroundings, transforms into her new alter ego- “Layla”, and steps into Dylan's exotic, titillating, and exciting world.

Dylan has been paying people to watch over an elderly resident of the trailer park, but apparently, his last employee has left without notice, leaving his cell phone behind. When Layla answers the phone, something about her voice, her bad jokes, and tone of innocence, intrigues Dylan, and the two strike up a most unusual relationship, one that builds a odd sort of trust, a sense of safety, and sends “Layla” on an amazing journey of sexual and self- discovery.

Told from Annie's first person perspective, her vulnerability and innocence jump off the pages, making me worry about her constantly. She has been sheltered, raised by an unstable mother, going straight into an abusive marriage. She has never been on her own before, and is now surrounded by some characters that made me a little nervous, unsure of whom to trust.

Dylan gives us a third person perspective, and while he is also struggling with some major emotional issues from his past, he exudes a powerful presence, one that made me feel like Annie/Layla would be safe with him. But, there are some boulder size obstacles the couple will face. Still, despite all that, Annie's journey is incredible, and I was so proud of her and the courage she shows by taking charge of her life.

This is a spell bounding story, very unique, with some big and interesting curves thrown in that kept me sitting on the edge of my seat.

The one huge bummer is that there is a cliffhanger and it's a whale of one. UGH!! BUT… the author was quite upfront with that and assures us the wait will not be long for the next chapter of the story. So, in the meantime, I'll be sitting on pins and needles, impatiently counting the days until I can hear Dylan's voice again. *Sigh*