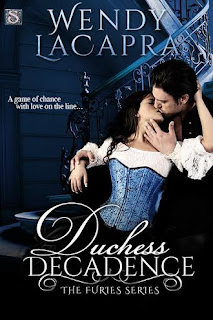 
Thea Worthington, Duchess of Wynchester divides her time between social engagements and playing her luck against fickle fortune. Yet every gamble is only a bluff—a means to hide from the pain deep within her, and the loss of a babe she never held in her arms. Now Thea's luck is about to run out. Her estranged husband has returned and seeks a reunion...


Plagued with guilt over what happened to his wife three years ago, the Duke of Wynchester has kept his distance. The duke is resolved to piece his family back together, especially now that he's discovered his beloved brother—long thought dead—still lives. But Thea's lovely, porcelain facade is on the verge of cracking...spurred on by the duke's brother's secretive, malevolent animosity.


With everything riding on her future, Thea plays a daring game of chance for love and her marriage...and this time, the dice are most certainly rigged.

She tugged at the edges of her gloves and laced her spine with steel. She had known returning to the duke was not going to be easy.


Wynchester cast a sideways glance. “Are you steady?” “Quite.” She shined her enameled smile. I can do this.


“Tonight,” he said low, “we must show unity—the Worthington family, as one.”


“You’ve made your wishes,” her eyes flashed, “and your priorities, clear.”


“Good,” his response was clipped. His gaze searched hers for an extended breath. He lowered his voice. “If you had spoken to Eustace the way he spoke to you, I would have answered in the same way.”


Her enameled smile turned brittle. “You are very talented at lecture.”


“At the very least,” anger flashed across his features, “you have acknowledged my talent for something.”


“Many things.” She put up her gloved fingers one by one. “Set-downs, cuts direct, efficient marshalling of your sycophants…”


He frowned. Then, his anger melted away into an ironic smirk. “At least I can coerce someone to listen to direction.”


She squinted. “I am not a sycophant.”


“No.” He made a leg—a brief bow that mocked more than it paid tribute. “My non-sycophant, duchess, I ask of you a boon.”


Despite herself she nodded.


Please was not something one heard often from a Worthington. Her anger transformed into another, just as visceral response: challenge. She decided she’d like very much to hear him say please again. Her gaze traveled over his face and then followed the line of his jacket to his breeches.


Yes. Another please would be more than acceptable.


“Ah, Wyn.” She reached up and cupped the hard angle of his ever-so-perfectly shaved cheek. “I will behave…” she made her voice low and husky and leaned forward, “if that is what you really wish.”


Wynchester’s eyes grew entirely black. She sent him a warm smile, and then turned. As she walked away toward the solace promised by the Furies, she felt his gaze on her back with every step.


She’d always had a penchant to notice little things. Like the way Wynchester’s eyes grew dark when surprise cut through his armor. Odd such perception should quell her anger and save her tonight. When she was small, it had been her downfall.


Grandmother, there are small clouds trapped in the diamonds on your bracelet. Is that why you have to sell it? There’d been clouds in her grandmother’s eyes, too, as she responded. Silly child. Sit down.


Since then, she’d kept most of her insights to herself.


Her gaze flicked to the far corner and she noticed Eustace’s smile. It enveloped his cheeks and wrinkled his forehead, but his eyes remained largely unaffected, like the eyes of someone far away. Those eyes turned on her and a chill passed through her veins.


She held his gaze for a moment, sending her own silent message.


I will protect Wynchester at all cost.


Eustace gave her a mocking bow.

Lady Decadence (Furies # 3) by Wendy LaCapra is a 2015 Entangled ( Scandalous) publication. I was provided a copy of this book by the publisher and Netgalley in exchange for an honest review.


What a bummer. This is the last book in the Furies trilogy! I am so sad to see it end, but Thea Marie and Wyn's story is an awesome way to bring the series to a close.

Before you start reading this one, I must say that unlike some series or trilogies, that can normally be read as stand alone novels, I highly recommend reading the two previous installments first. There is a mystery thread that, without the background information, I don't think you will completely understand why Thea is so concerned about her brother-in-law, Eustace.

For those who have been following along, Thea makes a wager with Wyn- if she wins the roll of the dice, they file for parliamentary divorce, but if he wins, Thea returns to him for the summer. With Thea's need to protect Wyn, she makes sure the dice rolls in her favor.

Thea and Wyn have lived apart for several years after the loss of their unborn child, something Thea blamed on Wyn for years, while harboring guilt of her own. This reconciliation, which may be temporary, will give Wyn the chance to win back the woman he loves. But, they have some major challenges ahead of them if they are to make a go of their marriage.

First of all, Wyn is not the most demonstrative guy in all the world, and still requires “lessons” on the art of conversation. He has been emotionally distant from Thea, but not only that, he, like many men of this era, believed their wives, as ladies, should not be subjected to their baser passions in the bedroom.

Thea Marie of course, is a healthy, vivacious woman who has a perfectly normal sexual appetite, and so believes her husband is a 'cold fish'.

These issues lie at the very bottom of the chasm between Wyn and Thea, not to mention a jewel theft, Thea was suspected of.


Although Thea has some ulterior motives for agreeing to spend the summer with her husband, she would like nothing more than to reconcile with him, prove her innocence, and bring out the unrealized love and emotions both are keeping locked up inside them.

However, the problem with Wyn's brother, who has miraculously returned from the dead, could prevent the couple from ever having a life together.

I fell in love with this series because it dares to journey down the road less traveled. The themes explored here are a little darker, more emotional, and difficult, than what you usually find in historical romances today.

'The Furies' are ahead of their time, all them bold, very brave, and ready to move on with their lives, now that they are more settled.

I loved getting to know these fine ladies, and enjoyed witnessing their close bond of friendship, which is stronger than ever, and am so happy to see Thea finally step out from behind the shadow of suspicion, see the mystery of Eustace solved once and for all, and have these wonderful friends and their husbands, enjoy their own Happy Ever After. 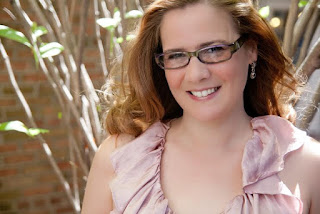 Wendy LaCapra has been reading romance since she sneaked into the adult section at the library and discovered Victoria Holt & Jane Aiken Hodge. From that point on, she dreamed of creating fictional worlds with as much richness, intrigue and passion as she found within those books. Her stories have placed in several contests, including the 2012 Golden Heart®. She lives in NYC with her husband and loves to hear from readers.
Connect:
Site: www.wendylacapra.com
Facebook: www.facebook.com/WendyLaCapraAuthor
Twitter: www.twitter.com/wendylacapra
Pinterest: www.pinterest.com/wendylacapra
Goodreads: www.goodreads.com/author/show/13444014.Wendy_LaCapra
Posted by gpangel at 1:00 AM