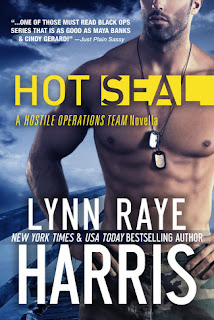 Sex with the ex… It shouldn’t be this good the second time around.

But when they’re forced to work together on a critical military mission, Dane can’t help but notice how the one woman he shouldn’t want is the only one he can’t stop thinking about.

will be available as a standalone novella by autumn 2015

Hot SEAL by Lynn Raye Harris
My rating: 5 of 5 stars

Hot Seal ( A Hostile Operations Team Novella- Book 9) by Lynn Raye Harris is a 2015 publication. I was provided a copy of this book in exchange for an honest review.

As if the 104 degree temperatures here in Texas weren't hot enough...

This ninth book in the HOT series is one of the steamiest to date, and that's saying something. I always love the romantic suspense elements in these stories with hot alpha SEALS and dangerous missions, but I am also a sucker for second change romance.

Kind of like that old Johnny Cash song- Dane and Ivy got married in a fever hotter than a pepper sprout. But, when they woke up from the haze and reality set in, Ivy's old insecurities rose to the surface when Dane announced he wanted to be a Navy SEAL. Her career in the DEA was important to her for personal reasons, and she didn't want to give that up to be a lonely Navy Wife, always wondering if Dane would return to her or not. Unable to make a compromise, the two divorced. Now four years later, a dangerous drug smuggling operation requires the help of the SEALS. Ivy is lucky she is still involved in the case at all, but is soon mortified to discover her ex-husband is a member of the military team called in to take over the operation.

I had a feeling I was going to like Dane, after all how could I dislike someone with the nickname of “Viking”. Sure enough this guy oozed alpha hotness, but is also sensitive, sweet, and funny.

Ivy, was shaped by her unfortunate childhood which led to being an adult with some issues to work through. I did like Ivy and was moved by her story, but she did frustrate me at times because Dane needed emotional support too and she seemed a little top self involved.

The chemistry between Dane and Ivy sizzles immediately with just one smoldering look, but the old issues between them still fester. Can they manage to work out a compromise so that one doesn't have to give up their career for the other?


For a novella length story, this one has a lot of action and suspense, too, with a riveting showdown between the SEALS and some really nasty drug lords. I have to mention the secondary characters too because their humor added a nice compliment to a pretty intense story.

Overall, this installment has my engines revving for the next book in the series, which thankfully will release very soon, so I won't have to wait too long between books. 4.5 stars