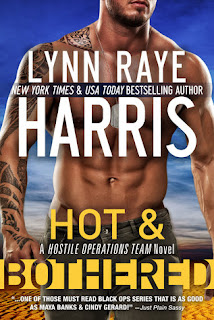 He can never have her. Having her means the end of his career in the Hostile Operations Team. But when he learns she’s carrying his child, he’ll have to make a choice…

Ryan “Flash” Gordon has been drawn to Emily Royal bin Yusuf since the first moment he met her. But she’s a terrorist’s widow, which means she’s completely off-limits. A HOT special operator can never be with a woman whose name is on government watch lists the world over.

But when Emily begs him for just one night, he can’t refuse. The next morning, she’s gone. Not just from his bed, but from his life.

Emily can never clear her name—or can she? When a rogue CIA operative offers her a chance to put her past behind her and do something for her country, she leaps at the opportunity—even though it means leaving behind the man she’s fallen in love with. But not before she lets herself have one night with him.

One night with stunning consequences…

Hot and Bothered by Lynn Raye Harris
My rating: 5 of 5 stars

Hot & Bothered by Lynn Raye Harris is a 2015 publication. I was provided a copy of this book in exchange for an honest review.

Informal. having a strong enthusiasm; eager


I got in on the ground floor with this series and this author has quickly become one of my favorites. I have watched this series develop from playing in small clubs to filling large stadiums. Each installment gets more polished and more emotional, without sacrificing the integrity of the series or what made it so popular to begin with.

As with any series, there were some stories or characters I liked more than others, but this very aptly titled book will go down as one of my favorites.

I would dare say there are few among us who have not made a bad relationship choice at one point in our lives. Emily, however, might take top honors, as her former husband turned out to be a terrorist. Now, she is a pariah, on the no fly list, and her life will never be the same. What is even harder to take is being in love with Ryan “ Flash” Gordon, a member of The Hostile Operations Team or HOT. Even if he was interested in being more than friends, getting involved with Emily would end his career on the spot, and Emily can't let that happen.

So, when Ian Black a CIA operative, offers her the opportunity to get her life back by going on a covert operation, Emily can't pass up that up. But, since it's such a dangerous mission, Emily knows it could be life or death, so she wants just one night with Ryan before she leaves, because she may never see him again...

Okay, I stifled a snicker when Ryan showed up with HOT and took Emily by surprise. Oh my was he ticked!

The chemistry between these two is certainly seductive, but there is an emotional bond in place first, and this gives the story a little bit of a softer tone. However, it is fitting under the circumstances, since Emily, in this case, is the one who is putting herself on the line, it's her life, and her predicament that demands her guy be a little less Alpha male/ cave man, although Ryan does have a few occasional relapses.

There is a lot of action, danger and suspense, with Emily getting to be a hero right along with Ryan. Despite certain shocking revelations and the very large issues this couple faced, which led to some angsty and tense moments, I thought this couple was more mature, each putting the other's needs first, which was super romantic and a sign of true love.

I loved both the main characters and enjoyed seeing them grow as individuals and as a couple. It was so great to see Emily redeemed, and walk away with a new mission and a new life. She deserved every bit of it.

This one has a little bit of something for everyone with hot military heroes, suspense, emotional intensity and great story story telling, and let's not forget the HEA!


I came across this on youtube while looking for a book trailer.  I couldn't resist putting it up here just for fun! 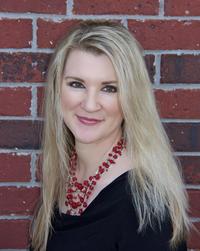 Lynn Raye Harris is the New York Times and USA Today bestselling author of the HOSTILE OPERATIONS TEAM SERIES of military romances as well as 20 books for Harlequin Presents. A former finalist for the Romance Writers of America's Golden Heart Award and the National Readers Choice Award, Lynn lives in Alabama with her handsome former military husband and two crazy cats. Lynn's books have been called "exceptional and emotional," "intense," and "sizzling." Lynn's books have sold over 2 million copies worldwide.
You can learn more at her website, www.LynnRayeHarris.com, or come and visit her at her Facebook page:http://www.facebook.com/AuthorLynnRay.... Lynn loves hearing from her readers! To sign up for Lynn's newsletter--where you'll be kept up to date about all of Lynn's books--text the word HOTTIES to 33733.