Brave the Heat by Sara Humphries- A Book Review 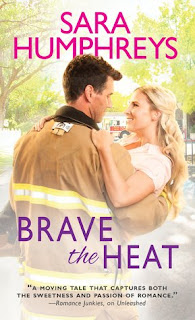 The only fire he can’t put out…

Jordan McKenna is back in town, and Fire Chief Gavin Maguire’s feelings when he sees her after all these years are as raw as the day she left. Then he was just a kid wearing his heart on his sleeve. Now he spends every day trying to atone for the tragedy he couldn’t prevent.

Is the torch he carries for her...

Jordan’s life has not exactly worked out the way she expected. A divorced mother of two with a failed acting career, Jordan’s biggest concern about coming back to Old Brookfield was seeing her first love. But when a series of suspicious fires breaks out, Jordan and Gavin realize that dealing with the sparks between them may be the least dangerous of their problems.

Brave the Heat by Sara Humphreys
My rating: 4 of 5 stars

Brave the Heat by Sara Humphrey's is a 2015 Sourcebooks Casablanca publication. I was provided a copy of this book by the publisher and Netgalley in exchange for an honest review.

This book is the first in a new contemporary romance series featuring the McGuire brothers. Many of us know this author for her wildly popular paranormal series, so this one may seem like a departure for some of you.


Jordan and Gavin were teenage sweethearts but Jordan abruptly left town without a word, never to be seen or heard from again for fifteen years.

Now she has come home with two young daughters, to take care of family matters and hopefully make a fresh start in her tumultuous life. What she didn't know what that for fifteen long years, Gavin has never completely gotten over her and was hurt by her departure far more than she ever could have imagined.

But, this is not the only pain Gavin is dealing with. A horrible tragedy inspired him to become a firefighter, and is still haunted and riddled with guilt over what happened. However, at the moment he has his hands full with an outbreak of fires obviously the work of an arsonist.


Now that Jordan is back in town, can Gavin get to the bottom of why she left all those years ago? Do they have a chance at love the second time around?


I enjoy reading contemporary romance more than I ever used to, but as a person well past her twenties, I often find it hard to relate to the characters and the issues they find daunting. So, I really appreciated that this story featured more mature characters who were dealing with meatier issues.

But, for me, what set this one apart from others like it, was the more realistic depiction of firefighters, highlighting the dangers of the profession, something that is often glossed over in romance novels.

With Gavin, we were introduced to what felt like a real, honest- to -goodness hero who literally goes into blazing infernos and pulls people to safety. But, while Gavin knows what a fire can do, how quickly it can spread, and how easily it can kill, being in love with Jordan frightens him just a much as a fire raging out of control.

“Love is scary and wonderful, and it's what makes us human”

Jordan's life has never been easy and she's never been able to catch a break. Her return home is a new start for her and a chance to face down old demons, clear up misunderstandings and past hurts, and hopefully set her life back on track. I thought she did the right thing by leaving home, but did not do it the right way.

It's obvious the old fires are still burning between Gavin and Jordan but is it too late to start over? Has too much time passed? Can they work through their doubts and fears in order to finally have a life together?

The drama and romance is compelling enough to make a great story, but the mystery involving the arson fires is not to be taken lightly, even though it runs in the background for much of the time.

Some parts of the story does seem to follow the usual contemporary romance pattern when it comes to second chance love stories, don't be fooled or become complacent. This was a very solid romance, with very intense situations and a shocking mystery.

I think this book set the stage for a very solid series and I'm really looking forward to the second installment. 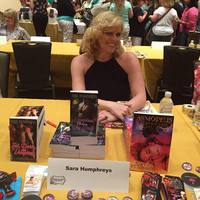 Sara Humphreys is the award winning author of the Amoveo Legend series. The third book in the series, UNTAMED, won two PRISM awards--Dark Paranormal and Best of the Best. The first two novels from her Dead in the City series have been nominated for the National Readers Choice Award. Sara was also a professional actress. Some of her television credits include, A&E Biography, Guiding Light, Another World, As the World Turns and Rescue Me.

She loves writing hot heroes and heroines with moxie but above all, Sara adores a satisfying happily-ever-after. She lives in New York with Mr. H., their four amazing sons, and two adorable pups. When she's not writing or hanging out with the men in her life, she can be found working out with Shaun T in her living room or chatting with readers on Facebook.

For a full list of Sara's books please go to www.sarahumphreys.com