Wildfire in His Arms by Johanna Lindsey- A Book Review + Giveaway 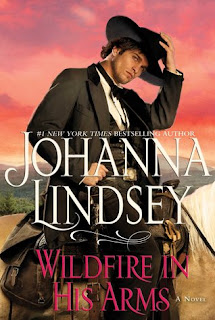 #1 New York Times bestselling author Johanna Lindsey’s passionate new tale about a gunfighter running from his past who finds his future when he escorts a beautiful outlaw to her hanging. Featuring one of Lindsey’s most intriguing heroes: the dangerous and mysterious Degan Grant from One Heart to Win.

With his work in Montana completed now that the Callahan-Warren feud has ended in marriage rather than bloodshed, Degan Grant sets out for California because it is far away from the home he wants to forget—until the US Marshal who saved his life calls in a favor. All Degan has to do is apprehend three outlaws on the marshal’s list and turn them over to the law. Easy enough, he figures, for a man no one wants to tangle with.

But then a bold young woman crosses his path. Maxine grew up so pretty and attracted so much unwanted attention in her Texas hometown that events spiraled out of control. She will try anything to escape the handsome, enigmatic gunfighter who intends to turn her over to a corrupt sheriff who will hang her instead of putting her on trial.

Saddled with a sassy, spirited young woman who insists she is innocent, Degan must hunt down a vicious killer and keep an old enemy at bay. But forced into intimate proximity with his beguiling prisoner, he finds his desire sparking into a wildfire of passion, and he can no longer deny that it is time for them to risk confronting their pasts so he can have a chance at a future with her in his arms forever.

Wildfire In His Arms by Johanna Lindsey
My rating: 4 of 5 stars

Wildfire in His Arms by Johanna Lindsey is a 2015 Gallery Books Publication. I was provided a copy of this book by the S&S XOXperts- The official street team of XOXO After Dark in exchange for an honest review.

When I received this book and I was so excited. I have not read a book by Johanna Lindsey in a really long time. I loved her older historical romance novels and couldn't wait to get reacquainted with her work.

This story is a Western Historical centered around legendary gunman Degan, and Maxine, a young woman on the run after allegedly committing murder.

Degan owes a US Marshall a huge favor so when the man asked Degan to help him haul in a few “most wanted” criminals, Degan can't refuse. First up on the list is Max, wanted in Texas for killing a man. 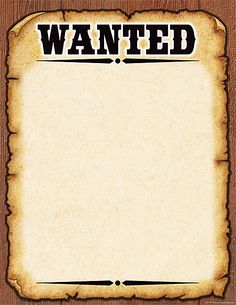 When Degan finally catches up with Max, he gets a lot more than ever bargained for. Max insist she is innocent, but that's not Degan's concern. His job is to bring 'em in, a jury can decide the rest. But, if Degan turns Max in, she could very well hang for a crime she didn't commit. Will Degan help her or will he maintain his calm, cool, unemotional veneer all the way to Texas?

Recently I have been on my soapbox a little because I feel like historical romance novels are focused too heavily on the Regency-era and we seldom get to read about a different time frame. Dukes, Earls, ball gowns and society rules are fun, but after awhile it seems like reading the same story over and over, only with the names changed.

So, on top of getting to read a new Johanna Lindsey novel, I get to read a Western, a sub-genre of historical romances we don't encounter nearly enough, in my opinion. So, while I wanted to stretch this one out and make it last, I ended up reading it in one evening, staying up way past my bedtime in the process. But, while my head was a bit foggy the next day, I had a smile on my face remembering how much fun this book is.

Degan is from Chicago, but has left his old life behind for good to become one of the most feared gunslingers around. Men quake in his presence, and Degan never refutes his hard earned reputation. But, when he finally catches up with Max, he is puzzled by her lack of fear. In fact, she defies him at every turn, is spirited, crafty and clever, keeping the unemotional, dark and brooding Degan on his toes at all times.

You will love Max and her constant chattiness, her resourcefulness and openness. Her character is honest, is so much fun, and if I had lived in the old west, I could see us being friends. Degan is more bark than bite, but boy is he stubborn!! He's practically immovable, but you will be able to see past all that, even though he did try my patience at times.

The story did get just a little monotonous around the half way mark and I was beginning to wish for a little action, one way or another. But, the pace picks up again in no time and things do get pretty heated, and there is lots of action.

There was no super heavy angst or drama, just a light and easy , funny, sweet, sensual, love story set in the west, and a delightful read all around.

It was fun watching Max melt Degan's heart, turning the hardened gunslinger into pure mush and seeing Max finally content and happy with her new life and love.

Even if you think Western style historical romance is not your thing, I think you will find this one fun and entertaining and of course Johanna Lindsey is a seasoned author with quite the resume so you know it's going to be well written.
This one gets four stars 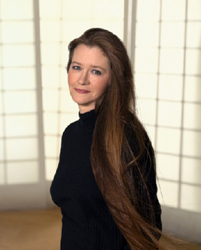 Johanna Helen Howard was born on March 10, 1952 in Germany, where her father, Edwin Dennis Howard, a soldier in the U.S. Army was stationed. The family moved about a great deal when she was young. Her father always dreamed of retiring to Hawaii, and after he passed away in 1964 Johanna and her mother settled there to honor him.

In 1970, when she was still in school, she married Ralph Lindsey, becoming a young housewife. The marriage had three children; Alfred, Joseph and Garret, who already have made her a grandmother. After her husband's death, Johanna moved to Maine, New England, to stay near her family.

Johanna Lindsey wrote her first book, Captive Bride in 1977 "on a whim", and the book was a success. By 2006, with over 58 Million copies of her books have been sold worldwide, with translations appearing in 12 languages, Johanna Lindsey is one of the world's most popular authors of historical romance.

Johanna's books span the various eras of history, including books set in the Middle Ages, the American "Old West" and the popular Regency England-Scotland. She has even written a few sci-fi romances. By far the most popular among her books are the stories about the Malory-Anderson Family, a Regency England saga.
Posted by gpangel at 12:30 AM