The Truth According to Us by Annie Barrows - A Book Review 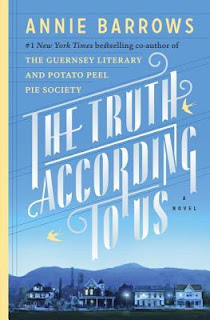 Evoking the same small town charm with the same great eye for character, the co-author of Guernsey Literary & Potato Peel Society finds her own voice in this debut novel about a young debutante working for the Federal Writer's Project whose arrival in Macedonia, West Virginia changes the course of history for a prominent family who has been sitting on a secret for decades. The Romeyn family is a fixture in the town, their identity tied to its knotty history. Layla enters their lives and lights a match to the family veneer and a truth comes to light that will change each of their lives forever.
My Review:

The Truth According to Us by Annie Barrows
My rating: 4 of 5 stars

The Truth According to Us by Annie Barrows in a 2015 Dial Press publication. I was provided a copy of this book by the publisher and Netgalley in exchange for an honest review.

This absorbing novel tells the story of the Romeyn family set in Macedonia, West Virginia in the late 1930's.
The story unfolds as a young woman named Layla travels to the small town in order to write Macedonia's history as a part of the Roosevelt Writer Project.

The Romeyn family was like royalty in the small town once upon a time, but the years have not been kind to them. Now Jottie, her brother Felix and his two daughters, Willa and Bird welcome Layla into their home as a boarder.

The story begins with Layla's acerbic, sarcastic and often humorous letters to family and friends she hopes will come to her aide and provide her a way out of the situation she has found herself in.

Layla is on relief and having to work a real job for the first time in her life, all because, as the daughter of a prominent senator, she has refused to marry the man her father wants her to. So, she is cast out and left to either sink or swim. So, swim it is.

But, her arrival will stir up a hornets nest when Felix decides he would like to get to know her better. If that weren't enough, Willa has begun to question a few things about her family, prompting her to snoop and spy on her father. But, she never would have guessed that a discovery made by chance will unearth years of torment, grief, pain, and guilt, as a terrible dark secret surfaces that will change the course of their lives forever.

As I turned the last page in this book, I had mixed emotions about how things turned out. There are only three characters in the book I liked. Layla, Willa, and Emmett. After all was said and done, I was disappointed in Jottie, still didn't like Felix and felt sorry for Sol, no matter what his motives might have been.

The town's history is being outlined through Layla's writing and while it's not necessarily the main focus it was quite interesting as the past is woven into “present day” events.

The puzzling part of the story for me was the unnatural relationship between Jottie and Felix. The brother and sister bond was unhealthy, in my opinion, and since they both left me feeling put out and frustrated, I decided they deserved each other.

The most promising character overall was Layla, because she is the only one who owned up to her mistakes, who took responsibility for her actions, and learned from it. She goes from being a spoiled, pampered debutante, to being a woman full of depth and compassion, and real maturity.

Willa, too, as precocious twelve year old, has more insight than most of the adults in the story. Her inadvertent discovery will be the catalyst to exposing a secret that has been tearing at her family for years. She will bring to her father and aunt a peace they never would have had otherwise. Willa comes the closest to unconditional love as is possible, by defending and loving her family, warts and all.

So, ultimately this story is about family and the bonds that, despite spectacular betrayals and lies, are unshakable, and forgiveness is the balm that soothes the pain and torture of loss and guilt.

The story is well written and the characters are expertly drawn, many whom lingered in my mind well into the night, hours after I had finished the book. I was conflicted by how some characters ended up and uplifted and proud by the growth others displayed. Overall this is a thought provoking story and a compelling read.

Get your copy here: 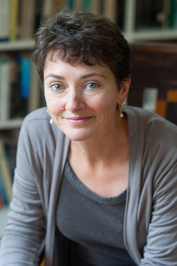 Annie grew up in Northern California, and graduated from the University of California at Berkeley, with a degree in Medieval History. Unable to find a job in the middle ages, she decided upon a career as an editor, eventually landing at Chronicle Books in San Francisco, where she was in charge of "all the books that nobody in their right mind would publish." After earning an M.F.A. in Creative Writing at Mills College, Annie wrote (as Ann Fiery) a number of books for grown-ups about such diverse subjects as fortune-telling (she can read palms!), urban legends (there are no alligators in the sewer!), and opera (she knows what they're singing about!). In 2003, Annie grew weary of grown-ups, and began to write for kids, which she found to be way more fun
Posted by gpangel at 1:00 AM