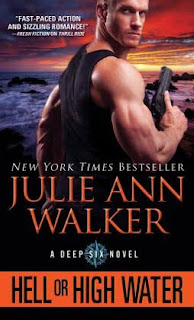 Book Information
Title: Hell or High Water
Author: Julie Ann Walker
Release Date: July 7, 2015
Genre: Romantic Suspense
Series: Deep Six, Book #1
Summary
Only two things could make former Navy SEAL Leo Anderson return to the world of weapons and warfare. First, a capsule of chemical weapons lost on the ocean floor, and second, a plea for assistance from the one woman he can't seem to forget-CIA Agent Olivia Mortier.
Now, working together to race against the clock and a deadly terrorist faction, Leo and Olivia must find the missing capsule, all the while battling the intense desire burning between them. If they can survive, can their growing attraction become more than just a momentary flare?
Goodreads Link: https://www.goodreads.com/book/show/23510148-hell-or-high-water 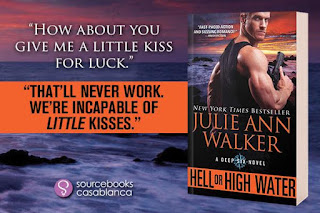 Message From The Author
Hi everyone!  My name is Julie Ann Walker and I'm tickled pink to be here today talking about my BRAND SPANKING NEW romantic suspense series, Deep Six!  It revolves around six newly retired Navy SEALs who just can't seem to shake their past and the Navy SEAL motto that "the only easy day was yesterday."  Set in the Florida Keys, the series is filled with sun, sand, danger, intrigue, adventure, and plenty of half-dressed alpha hotties.  LOL!  Sound like a good time?  I guarantee it is!  And I guarantee you're going to fall in love with these six men.
Take Leo "The Lion" Anderson.  With his sun-streaked, sandy blond hair and perpetual tan -- not to mention those hazel eyes and beard stubble -- he's sure to win your heart.  And that's before you get to his no-bullshit, take-command-of-any-situation attitude and the fact that he's trying to fulfill his father's dying wish.
Then there's Brando "Bran" Pallidino.  A native New Jerseyan, Bran grew up on the mean streets of Newark.  He's rough.  He's tough.  And his Italian-American heritage means he comes complete with soulful brown eyes, a face that belongs on billboards, and a love for good food and good wine.  (That last part means his beer-loving teammates give him a lot of grief. *wink*)
You won't be able to resist Mason "Monet" McCarthy.  As a boy from Beantown, Mason learned to use the F-bomb in really colorful ways.  He's big.  He's burly.  He's not the kind of guy you'd like to meet in a dark alley.  Yet his thick black hair and crystal blue eyes soften what would otherwise be an entirely intimidating appearance.
Who doesn't love a country boy?  Dalton "Doc" Simmons was born and raised in Montana.  He's a lean, mean, fighting machine, with a face that's all angles as if it's been carved down to its barest essentials by a hot, stinging prairie wind.  Doc has a tragic past.  And he's fighting to come to terms with it.
Next up is Ray "Wolf" Roanhorse.  Wolf's Cherokee heritage makes him strikingly handsome, with a blade of a nose, high cheekbones, flashing black eyes, and a lush, beautifully-shaped mouth.  Born into poverty on a reservation in Oklahoma, Wolf has more than himself to worry about.  He has his whole family depending on him.  But if anyone can shoulder that burden, it's Wolf.
And last but certainly not least, we have Spiro "Romeo" Delgado.  Romeo likes to play up that whole Latin-lover thing.  And with his swarthy skin, precisely trimmed goatee, and honed physique, he does a pretty good job of it.  But that's just what's on the surface.  Underneath it all, Romeo is desperately trying to make up for the mistakes of his past.
See?  What did I tell you?  You love them already, don't you?  Read on for a bonus scene from HELL OR HIGH WATER where you get to meet all of the Deep Six heroes! 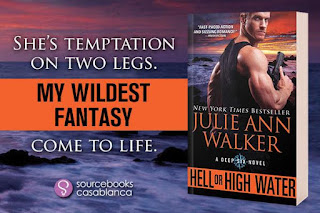 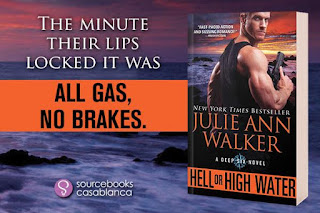 Hell or High Water by Julie Ann Walker
My rating: 4 of 5 stars

Hell or High Water by Julie Ann Walker is a 2015 Sourcebooks Casablanca publication. I was provided a copy of this book by the publisher and Netgalley in exchange for an honest review.

Most of us know JAW from her mega popular Black Knight series and we've come to expect high octane, fast paced, action packed romantic suspense. This new series gets off to a solid start as we meet Leo and his crew, a group of Navy SEALS who have officially “retired” after a failed mission that took the life of one of their comrades.

Leo was on a operation in Syria working with CIA agent Olivia Mortier, and the two were close to acting on the sizzling chemistry between them when things imploded and Leo found himself out of the SEALS forever. But, now Olivia is in need of a topnotch diving team for a highly secretive, off the record, operation in which innocent lives are at stake. Leo and his team are the best there is, but could Olivia have an ulterior motive in asking for their help? Can she convince Leo to put his plans of locating an old Spanish Galleon and going on a treasure hunt on the back burner for awhile in order to help her?

Who doesn't love a high seas adventure? Leo “the lion” is a perfect hero with a SEAL background, and just the right amount of that military alpha male trait, but not over the top macho. Olivia is also a great character, a woman who has been forced to keep her emotions in check due to her career in the CIA, but who is approaching thirty , and wishing for a little more from life outside of her job. She' s smart, holds her own under pressure, but has a softer, human side too.

“Remaining aloof and unloved would be her decision and – Whoa there, Nelly. Don't go getting all maudlin. Next thing you know, you'll be sporting sweats, eating frozen dinners, and drinking boxed wine. Olivia Mortier: cover girl of Woe is Me magazine.”


Sometimes, the first book in a new series can leave me feeling a little disoriented, and I did suffer from that a little with this one. Setting the stage for the series, introducing us to all the players, setting up the next book, and still coming up with a plot line interesting enough to entice readers to return for the follow up, can make the story a little too busy, and at times I did think there was a little too much going on or too many people involved. However, I enjoyed this one mainly because of it's setting on the high seas, which is kind of different for a change, and I thought it added a little panache to the adventure side of things plus the dialogue between Olivia and Leo was snappy and sharp, and I thought the chemistry between them was palpable, not forced or focused solely on the physical aspect of the relationship.

The secondary characters rounded out the story nicely and added humor and comic relief to this tense thriller.

Overall, I think this is story gives the series a strong lead in and I'm really looking forward to the next installment. 4 stars 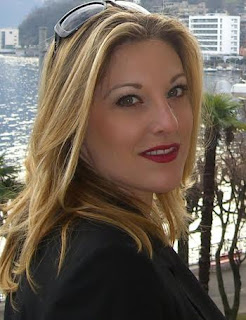 Author Biography
Julie Ann Walker is the New York Times and USA Today bestselling author of award-winning romantic suspense. She has won the Book Buyers Best Award, been nominated for the National Readers Choice Award, the Australian Romance Reader Awards, and the Romance Writers of America's prestigious RITA award. Her latest release was named a Top Ten Romance of 2014 by Booklist. Her books have been described as "alpha, edgy, and downright hot." Most days you can find her on her bicycle along the lake shore in Chicago or blasting away at her keyboard, trying to wrangle her capricious imagination into submission.
Social Networking Links
Website: http://julieannwalker.com/
Goodreads: https://www.goodreads.com/JAWalkerAuthor
Facebook:https://www.facebook.com/jawalkerauthor
Twitter: https://twitter.com/JAWalkerAuthor