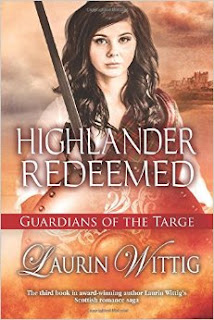 Scotia MacAlpin may be only eighteen years old, but she’s no stranger to trouble. Her latest incident—which resulted in a death and forced her clan into battle—has made her an outcast among her exiled people. Scotia is tired of being ignored and overshadowed by her sister, a gifted Guardian of the Targe, and she’s become hell-bent on destroying the army out to capture the ancient Highland relic for their English king.

Duncan of Dunlairig has looked out for Scotia since she started to walk. She was as restless and reckless then as she is now—only the stakes have become higher and more perilous. While the rest of Clan MacAlpin ostracizes her, Duncan secretly helps Scotia become the warrior she yearns to be. But the real test of her skills may come when he needs her help—and her long-forgotten heart—in this thrilling and romantic Guardians of the Targe tale.

Highlander Redeemed by Laurin Wittig
My rating: 5 of 5 stars

Highlander Redeemed by Lauren Wittig is a 2015 Montlake publication. I was provided a copy of this book by the publisher and Netgalley in exchange for an honest review.

I really enjoyed this Scottish historical novel featuring young Scotia MacAlpin, a young lady now outcast by her family and clan. The combination of adventure, paranormal elements, and romance brings us a tale of intrigue that could lead our young heroine to not only redeem herself, but to reach heights she never dreamed possible.

When the defiant Scotia disobeys her father's direct order and puts herself in grave peril, a young man comes to her rescue and dies as a result. Now, Scotia is being blamed for her careless actions and is reminded daily of her mistake. But, despite the constant reminder she cost a young man his life, she continues to defy orders by sneaking away from camp, training herself to become a guardian in order achieve vengeance for the deaths caused by the English.

When it becomes obvious Scotia can not be tamed by the women in the camp, Duncan is assigned to keep tabs on her. When he realizes she intends to become a warrior, he decides the best thing for all concerned is to take her under his wing and train her properly. As a result the two discover Scotia has the gift of “knowing”.

Scotia is one proud, confident, and defiant young lady. At times she takes that act to the extreme and becomes haughty and defensive. However, she is much smarter than people give her credit for and at times she pricks Duncan's ego by showing him up. Scotia has a big problem with taking orders and going through the correct chain of command. This rogue behavior nearly cost her everything, but in the end she learns some valuable lessons. She is just one of those stubborn people who has to learn the hard way. But, she also taught her people some lessons as well. It just might be possible she is born to be a leader, a guardian, and a warrior and her kin may have

But, as the quest continues to take back their home and land, Duncan and Scotia also discover they have an unmistakable bond that becomes passionate as they spend more time together. But, will Scotia's actions drive a wedge between them forever or will they both learn to give and take to make the relationship work?

I didn't always like Scotia's stubbornness, and I didn't always like Duncan's refusal to bend just a tiny bit. The lesson was a difficult one for both parties, but in the end they realize the wisdom the other brought to the table. The paranormal elements add a magical quality to the story and helps Scotia discover what her true role will be in the future. The action is paced evenly, giving the character and the story plenty of time to develop. The romance is secondary to the story which some might find disappointing, just a little, but I for one do not mind the focus being on the plot, and letting the romance simmer in the background for a while. I thought Scotia and Duncan had some things they needed to work out first and a lot of growing up to do before the relationship took a more serious turn. However, the love they have for one another literally jumps off the page, even when it looks like all is lost, I knew this couple was destined for greatness.

I wasn't sure how I would take to this one since Scotia was a girl in her teens and I was afraid the novel would have a YA feel to it. It marginally have that quality, but mostly this is an adult novel and I found it highly entertaining. 4.5 stars 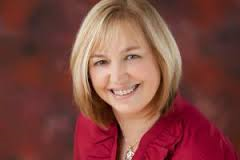 
For more information about all of Laurin’s books, please visit her web site, http://LaurinWittig.com.
Posted by gpangel at 1:00 AM