The Rake to Reveal Her by Julia Justiss- Review + Giveaway 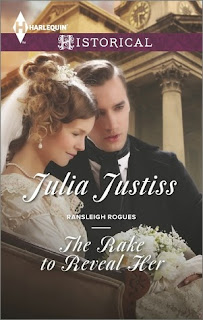 Dominic Ransleigh lost more than his arm in battle—he lost his reason for living. Returning to his family seat, he shuns all society. If only his beautiful, plainspoken tenant, Theodora Branwell, wasn't so hard to ignore…

Since her fiancé's death on the battlefield, Theo's devoted herself to caring for soldiers' orphans. She's powerfully attracted to Dom, but knows all too well the consequences of temptation. Is Theo, who's survived so much, brave enough to reveal her secret to her handsome, wounded neighbor?

Thanks so much for joining us today at The Book Review!  It's always a pleasure to have you as our guest!


Dom’s book is about change—in his case, changing what he thought he was going to do with his life when the injuries he sustains at Waterloo make it impossible for him to pursue that goal any longer. Change is a scary, defining, generally unwelcome force in our lives, but it often leads us into doing and becoming something better and greater than we had envisioned. With the help of Theo, an unusual and remarkable woman, Dom finds his path to a new life.


In my teen years, I had a very small incident of life-change. My mom was a nurse, I had trained as a nurse’s aide, and the summer before my senior year of high school, I worked full-time on the evening shift at a local hospital. I was assigned to a unit for disturbed geriatric patients; those with a limited grip on reality—or the uncooperative—were bedded in this 10-patient unit.


One evening after dark, when the charge nurse was on her break, leaving me the only staff member in the unit, a patient called me to her bedside to help her get a drink of water. She was a fall risk and had been trying to get out of bed, so had been put in hand restraints (her hands were loosely bound at the wrists with gauze and tied to the bed rails so she couldn’t get up—something you can’t do any more.) She beckoned me to lean close to her face to put the straw to her lips, and then whispered, “Y’all have been so mean to me, after I die, I’m going to come back and haunt you.”


Her dark eyes glowed with malice as she glared at me. I was sixteen, all alone in the dark with a voodoo queen, me who had never done well with horror movies or scary stuff. The incident was disturbing enough that, combined with several other episodes that occurred that summer, I decided I didn’t have the internal fortitude to be a nurse and headed in another direction that eventually led to writing.


Dom’s reason for change was physical limitations rather than emotional ones, but whatever the cause, one defining moment can certainly send you off in another direction!


Have you ever experienced a dramatic “ah ha, I need to do something else moment?”


Share your thoughts on your change or change in general; one commenter will win a copy of THE RAKE TO REVEAL HER.

The Rake to Reveal Her by Julia Justiss
My rating: 5 of 5 stars

The Rake to Reveal Her by Julia Justiss is a 2015 Harlequin Historical publication. I was provided a copy of this book in exchange for an honest review.

Once more Julia Justiss writes a historical romance with depth, feeling, plus an inspiring story that will leave you feeling happy and uplifted.

War is just an awful thing, no matter what era of time or what the circumstances. The survivors suffer the aftermath in a number of ways. For Theo is was the heartbreak of losing her fiance, then the death of her father. For Dom it was coming back disfigured and without one of his arms. He was unable to enjoy his horses any longer, and all the activities he had once taken pleasure in no longer held any joy for him. So, he has retired to the country to recuperate and spend a little time alone.

But, a chance meeting with the unconventional Theo opens up a new world for Dom, but Theo also opens up his mind and his heart to this refreshing young lady and her work in caring for the orphans of soldiers. But, Theo has a secret, a secret so explosive it could undermine all her work, change Dom's opinion of her, and could result in the loss of a very special young man in life. Will Theo's secret be revealed? Will Dom turn his back on her? Or will he come to her rescue?

I love regency period romance that steps away from the marriage mart, balls, earls, dukes and all the rules of society. In this case we have Theo, a woman who has seen much and lost much, but who has a big heart, a straightforward and plain spoken manner, who has made a choice in taking in an orphaned child as her own that very could prevent her from marrying, since most men wouldn't consider to marriage to a woman with an orphaned child in tow.

The effect Theo has on Dom is incredible. She draws him out and gives him a new, loftier purpose in life. Dom also has a profound effect on Theo who is having a hard time giving her heart to someone again after her fiance's death.

This is a tender romance, featuring characters with charm, humor, and fortitude. These days I can't find too many regency era novels that employ this type of depth, and as always I thank any author who will adhere to the social and moral laws that were in place in this era, while giving her characters a more progressive thought process. The story is not overly angsty, but still builds tension and is proves true romance is not just about the physical display of affection. These characters show how the real power of love can have such a positive effect on each other and how that love spreads out to others who need love and support. I really enjoyed this novel and recommend it to lovers of regency romance, but also to anyone who enjoys a wonderful feel good story.

Enter the drawing to win one e book copy and one print copy of The Rake to Ruin Her by Julia Justiss.
a Rafflecopter giveaway
Posted by gpangel at 12:00 AM