That Thing You Do by Maria Geraci- Blog Tour + Giveaway 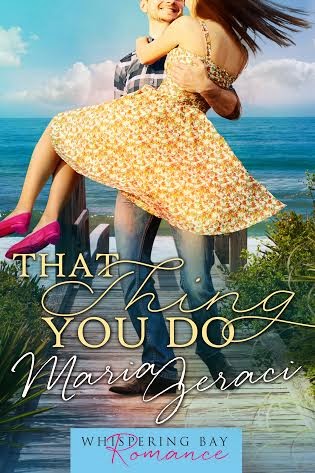 That Thing You Do Whispering Bay # 1


Allie Grant doesn’t believe in second chances. She does, however, believe in the power of a permanent paycheck. So when a tipster reports that the soon-to-be demolished senior center in her hometown is haunted, Allie hightails it to Whispering Bay to get the scoop that could secure her dream job at Florida! magazine. What she finds, though, is far scarier than any ghost. Cue her ex-boyfriend, sexy construction foreman Tom Donalan.


When Tom catches Allie poking around his construction site, he quickly realizes his former high school flame is just as feisty as ever. And, heaven help him, her irresistible, mile-high legs still take his breath away. But Tom isn’t about to delay the building’s demolition because of a silly ghost story.


With neither of the stubborn exes backing down from their opposing positions, sparks fly. And, underneath the surface, the fire of their old attraction burns as hot as ever. When strange things start happening with increasing frequency around town, even a tough skeptic like Tom is tested. The question is, can Allie and Tom stop fighting long enough to get to the bottom of Whispering Bay’s ghost problem—and the more important matter of mending their broken hearts?
EXCERPT:
Keeping herself as still as possible, Allie slipped the cell phone back into her shorts pocket. The building was now eerily quiet. No gravel crunching. No chains rattling. Had she imagined it? Probably. Allie let out a pent up breath. She didn’t know whether she was relieved or disappointed. Both, maybe.
She waited a few minutes so that her vision adjusted to the darkness. Years ago, she’d been inside this building. Buela had brought her here after Allie had graduated high school, proud of the granddaughter about to go off to college that she’d raised almost single-handedly. Back then the senior center had been alive. Full of noise and energy. Now, the place just looked sad. Empty, with bits of scattered trash strewn on the floor.
Something small and dark scurried past her.
Correction: Not exactly empty.
Cockroaches!
The place was probably crawling with them. Allie was a native Floridian, so she should be used to all manner of creepy crawly things, but sorry, she’d never get used to cockroaches. Best to get this over with as quickly as possible.
“Hello?” she called out. Unable to help herself, she giggled. More out of nerves than a comedic response, because it wasn’t as if she expected someone to answer.
A chain rattled—louder than before—followed this time by a distinct clang.
This was no product of her imagination.
Her mouth went dry. She squeezed the flashlight in her hand, nearly cutting off the blood flow to her fingers.
She tried to concentrate on the rattling sound but all she could hear was the soft whoosh of waves lapping onto a beach. Was her mind playing tricks with her? Because it would be impossible to hear the ocean from inside the building.
Then she remembered the window she’d crawled through.
Of course. The sound was coming though the now open window.
A rush of air swept through her. But instead of the cool night air she’d expected, this was a warm tropical breeze. A pleasant smell assailed her nostrils. Slightly sweet, and vaguely comforting. Lemons, maybe? Her arms erupted in goose bumps. But strangely enough, she was neither cold nor frightened.
A door slammed behind her. She spun around just in time to see a shadow dash across the room. The warm lemony smell vanished, replaced by a voice inside telling her that she was in big trouble. The door was padlocked. Which meant that whatever had gotten inside the building had bypassed the lock. Which was…impossible.
Allie tried to scream, but her throat wasn’t cooperating.
Luckily, her legs weren’t so chicken shit.
She turned to run but something charged at her, smacking her solidly in the chest. The air flew from her lungs. Her last thought before hitting the floor was that ghosts weren’t supposed to make physical contact. They needed Whoopi Goldberg for that.
She struggled to roll out from under whatever had attacked her, but it was no use. The thing on top of her was composed of solid bone and muscle.
“Hold still,” hissed a deep voice. For a second there, it sounded like… No, that too was impossible. “I told you the next time I caught you breaking into the place I’d call the cops.”
Allie nearly swallowed her tongue. She knew that voice. Hot, dark, male. And definitely alive.

“I think you have me confused with someone else,” she gasped.
The body above her stilled. Did he recognize her voice, too?

That Thing You Do by Maria Geraci
My rating: 5 of 5 stars

That Thing You Do by Maria Geraci is a 2015 TKA Distributions release. I was provided a copy of this book by the publisher and Netgalley in exchange for an honest review.

I loved this cute romance novel filled with some of the most wonderful small town residents of Whispering Bay, Florida. This is a delightful small town, second chance at love, romance novel that is fun, spirited, and full of charm and depth.


Allie Grant is assigned a story by Florida! Magazine to investigate the alleged haunting of a senior citizens Center about to be demolished. This type of story is not the kind of reporting Allie really wants to do, but it appears it might be her niche. The problem is, the haunting is in Whispering Bay, the place Allie will always remember, not because it's her home town and she has fond memories, but because it was the place she suffered her worst humiliation, the place where her heart was broken, maybe for good. But, Allie needs this assignment and the money, so she drops everything and heads home to investigate a ghost story.

Tom can not believe he is face to face with Allie Grant after twelve years have passed. Tom and Allie were an item once, but their break up was a bad one, bad enough that Allie moved away to Tampa and he hasn't seen her since, until now. What is she doing breaking into the old senior citizen center in the dead of night? And why is seeing her again making him feel so awkward and confused?

They say it takes a village to raise a child, but in this case the group efforts of one small town brings together two people who were basically robbed of their chance at Happy ever after. This story made me laugh out loud, made me care about the characters, warmed my heart in a few places, and even had me a little misty eyed at the end. I liked the well rounded cast of characters who gave the story an added depth, and for the record, this book could be placed in the chick lit genre as well as contemporary romance. For those looking for high angst, overheated alpha males, erotica, or New Adult you might want to know that before you start the book. If you know what to expect going in, you will surely find this book to be as charming as I did.

This book is entertaining from start to finish. The ghost story and the town's resident's gave the book a whimsical and magical quality to it at times. One of the best parts of the story was the relationship Allie forges with one of the senior citizens in town, a kindred spirits of sorts and a source of inspiration to her in the long run.

There are some sexy moments, but the relationship itself was where the author chose to center the story. The issues that drove the couple apart twelve years ago was not uncommon, but in my humble opinion, two wrongs don't make a right, but Tom did what he thought was best, even if it wasn't what he really wanted to do.

Now twelve years later, Allie is suffering from 'once bitten, twice shy' syndrome, so she is fine with just having sex with Tom. In fact, she thought maybe it would help get him out of her system once and for all. But, feelings? Allie has no intentions of opening herself up to that kind of pain again, not with Tom. However, Tom does not like the 'hook up' and move on idea very much. Which is good, because it was about time Tom stood up and did the right thing.
But, can he convince Allie to make him a part of her four step life plan?


I hope we will touch base with these characters again because I think a full series built up around Whispering Bay would work out great. There were some residents of Whispering Bay that deserves a happy ever after of their own , and we need to know what the future holds for the long married couple Mimi and Zeke.

So, overall , this book worked for me because of the small town setting and the second chance at love themes, plus the light hearted feel good nature of the book. 4.5 stars


View all my reviews a Rafflecopter giveaway 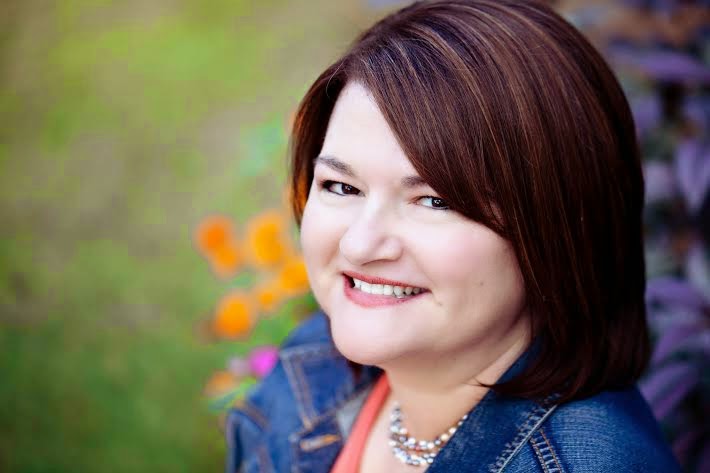 Maria Geraci writes contemporary romance and women’s fiction with a happy ending. The Portland Book Review called her novel, The Boyfriend of the Month Club, “immensely sexy, immensely satisfying and humorous.” Her fourth novel, A Girl Like You, was nominated for Romance Writers of America’s prestigious RITA ® award. She lives in north Florida with her family, which includes a very needy chihuahua, an extremely needy dachshund and a not-so-needy cat (guess which one she likes best?). You can reach at her www.mariageraci.com.