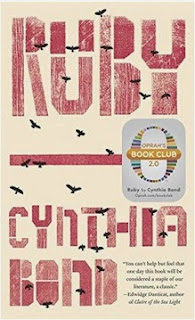 Ephram Jennings has never forgotten the beautiful girl with the long braids running through the piney woods of Liberty, their small East Texas town. Young Ruby Bell, “the kind of pretty it hurt to look at,” has suffered beyond imagining, so as soon as she can, she flees suffocating Liberty for the bright pull of 1950s New York. Ruby quickly winds her way into the ripe center of the city--the darkened piano bars and hidden alleyways of the Village--all the while hoping for a glimpse of the red hair and green eyes of her mother. When a telegram from her cousin forces her to return home, thirty-year-old Ruby finds herself reliving the devastating violence of her girlhood. With the terrifying realization that she might not be strong enough to fight her way back out again, Ruby struggles to survive her memories of the town’s dark past. Meanwhile, Ephram must choose between loyalty to the sister who raised him and the chance for a life with the woman he has loved since he was a boy.
My Review:

Ruby by Cynthia Bond
My rating: 3 of 5 stars

Ruby by Cynthia Bond is a 2015 Hogarth publication. I was provided a copy of this book by the publisher and Edelweiss and Blogging for Books in exchange for an honest review.

Classified as Southern Gothic, this novel embodies the genre and breaths new life into a long ago abandoned form of writing. There is no question the writing here is absolutely beautiful, the prose lyrical, immediately capturing my attention and I was positive I would lose myself in this novel.

However, it should be noted that this book is very difficult to read due to the extreme graphic nature of the events depicted. As a student of the Gothic genre, I have come to learn what to expect in Southern Gothic, but even I had to put the book down and go back to reading something much lighter in tone. Some of these themes were explored too often and it became a distraction that took me out of the story completely. At one point I stopped reading the book and wondered if perhaps I should just leave it be indefinitely.

I decided to see it through to the end and was indeed happy to see the hard work Ephram put into saving Ruby was indeed paying off. I rooted for Ruby, I felt her pain, wanted her to recover, to live and be productive and see Ephram, really see him. I think there is triumph in this area, and still much work to be done.

In the end, I wondered if seeing Ruby form some kind of fortitude, gain strength, overcome real or imagined demons, fight the good fight, and all the rest was worth the harrowing journey it took to get to that point. I'm not sure I would go through it if I had known more about the intense graphic nature of the book. However, I have made it through to the other side now, breathing a huge sigh of relief, feeling that I was at least rewarded with hope for Ruby and will have faith that she will succeed for herself and on behalf of all her children. 3 stars

CYNTHIA BOND is a New York Times Best-Selling Author. Her novel RUBY was chosen to be an Oprah Book Club 2.0 selection. RUBY was also a Barnes & Noble Discover Great New Writers selection, and an Indie Next Pick. A PEN Rosenthal Fellow, Bond attended Northwestern University’s Medill School of Journalism, then moved to New York and attended the American Academy of Dramatic Arts. She founded the Blackbird Writing Collective in 2011. Cynthia has taught writing to at-risk and homeless youth for over fifteen years, and is on staff at Paradigm Malibu Adolescent Treatment Center. She is currently completing the second book in the RUBY Trilogy. A native of East Texas, she lives in Los Angeles with her daughter.
Posted by gpangel at 7:48 AM