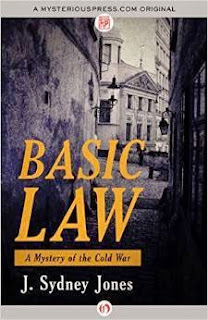 Expat American journalist Sam Kramer is burned out: too many dead bodies, too many wars covered, too little meaning in it all. He’s got a dead-end job at the Daily European as the correspondent for Vienna, where nothing happens now that the Cold War is over. And that is exactly how Kramer likes it.

But his private neutral zone is shattered with news of the suicide of Reni Müller, a German left-wing firebrand and Kramer’s long-estranged ex-girlfriend. To his surprise, Kramer suddenly finds himself the executor of Reni’s literary estate—but the damning memoir named in her will is nowhere to be found. Tracking down the manuscript will lead Kramer to the unsettling truth of Reni’s death, drawing him back into the days of the Cold War and showing him the dark side of the woman he loved.

Basic Law: A Mystery of Cold War Europe by J. Sydney Jones
My rating: 4 of 5 stars

Basic Law by J. Sydney Jones is a 2015 Mysterious Press publication. I was provided a copy of this book by the publisher and Netgalley in exchange for an honest review.

Sam Kramer is shocked to learn a former lover, “Red Reni” has committed suicide. He is even more puzzled when she names him the executor of her literary estate. When he begins looking for Reni's memoirs, he discovers they are missing, and when another death occurs, it makes him wonder if Reni really committed suicide or was murdered. Could one of the old friends and political radicals that were once so close, and so idealistic, who dubbed themselves “The Magnificent Seven”, during the late sixties and seventies be responsible?

This is an interesting and unique mystery, with a old fashioned detective feel to it, as Kramer and his buddy,hit the pavement in order to look into the mysterious death of their old friend and reacquaint themselves with the old gang in search of Reni's memoirs. The gang waxes nostalgia, like people attending a high school reunion, but all of them on edge as they fear their present day lives could fall apart if Reni's tell all journals ever see the light of day. So, you can see how the suspense begins to build, giving the book a taut edge.

However, despite all that, the book is understated in many ways, moved at an excruciatingly slow pace at times, and for some reason I kept feeling like I had walked into the middle of the play, because I could never get a feel for what this group was into back in the cold war era. It's all rather vague and shadowy, which might have been the author's intent.

Nevertheless, the story did keep my attention had a couple of surprising plot twist, and was a change of pace from the types of mysteries I usually read. 3.5 rounded to 4

J. Sydney Jones is the author of the acclaimed "Viennese Mystery" series, set in Vienna 1900. Novels include THE EMPTY MIRROR, REQUIEM IN VIENNA, THE SILENCE, THE KEEPER OF HANDS, and A MATTER OF BREEDING.
“What Sir Arthur Conan Doyle did for Victorian London and Caleb Carr did for old New York, J. Sydney Jones does for historic Vienna.”
-Karen Harper, New York Times bestselling author
Visit him at his Web site: www.jsydneyjones.com
Posted by gpangel at 1:00 AM