The Girls of Mischief Bay by Susan Mallery- A Book Review 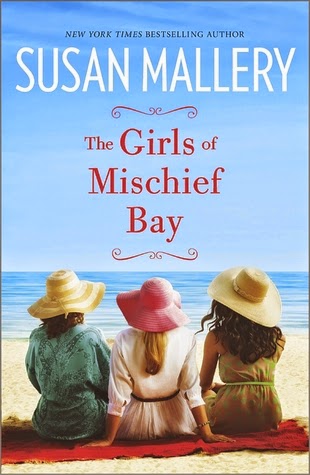 Nicole Lord wants to be a good wife, but there's a difference between being supportive and supporting her husband, who quit his job to write a screenplay she's never seen. He won't even help take care of their son, leaving Nicole to run the house and work full-time at her Mischief Bay Pilates studio. Can she say enough is enough without losing the man she loves?

Sacrificing a personal life for her career is how Shannon Rigg rose to become vice president in her firm, but she wonders now whether she made the right choice. An exciting new relationship with a great guy convinces her that it might not be too late—until he drops a bombshell that has her questioning whether she can have it all. And if she can, does she want it?

Although Pam Eiland has a beautiful house and a husband she adores, she feels… restless. She wonders who a stay-at-home mom becomes after the kids are grown. Finding sexy new ways to surprise her husband brings the heat and the humor back to their marriage, but when unexpected change turns her life upside down, she'll have to redefine herself. Again.

Through romance and heartbreak, laughter and tears, three very different women will discover that friends can become family, and that life is richer with sisters at your side.

The Girls of Mischief Bay by Susan Mallery
My rating: 5 of 5 stars

The Girls of Mischief Bay by Susan Mallery is a 2015 Harlequin MIRA publication. I was provided a copy of this book by the publisher and Netgalley in exchange for an honest review.

Susan Mallery does it again! A trio of diverse women meet through a shared Pilates class and form a close bond.

Pam, Shannon, and Nicole couldn't be any different. Pam is the stay at home wife and pet parent to Lulu, Nicole is going through a confused state in which her dependable husband has pulled a 180, and Shannon is the successful business woman who really wouldn't mind having a man to share her life with.
Shannon, having achieved great success in her career is now ready to find that special person. It looks like she may have struck pay dirt when she meets Adam. But, if Adam is the one, then some big hopes Nichole had may have to be shelved, and some priorities on Adam's part will have to at least even out. Can they make it work?

Pam has is good, really good. A great husband, grown healthy children, a nice house, but she feels her marriage and her life is in a rut. She is like a mother figure to Shannon and Nichole managing to give them advice about relationships and money, and is such a good listener. But, Pam will be the one who needs her friends the most as her life takes a hairpin turn no one saw coming. This is the most heartbreaking story of the three and I admit to feeling like I was kicked in the stomach. Can Pam manage to pull her life back together or will she sink down into depression and just give up?

Finally, we have Nichole and Eric. For me Eric was not too good at explaining his goals to Nichole prior to marriage and so she is blindsided by his sudden shift. In my world the stunt Eric pulled and his subsequent attitude would be a big fat “hell no”. But, if Eric being out of work and out touch was bad, just wait... it gets better.. or well, worse. Is the marriage going through growing pains or is it too late to get back what they had?

Susan Mallery's novels are always so thought provoking. I try putting my self in each character's shoes and try to empathize with their feelings and how they are processing things. There were no pat answers or solutions for any of these women. Pam's story is the primary focus in this installment. Pam is someone I can really relate to and her tale was a kind of cautionary one. While there is no right or wrong way to deal with the pain Pam went through, I was hoping she would not allow herself to be swallowed up by it. I think Pam's assessment of her situation was spot on and I know in my heart this dear lady will live the second half of her life with gusto.

As for the other two women we meet here we will have to touch base with them in the future to see how they are going to deal with the major life curves they have been thrown. Since I have already invested myself into the characters I am anxious to see how everything works out for them. Overall this one is 4.5 rounded to 5 With more than 25 million books sold worldwide, New York Times bestselling author Susan Mallery is known for creating characters who feel as real as the folks next door, and for putting them into emotional, often funny situations readers recognize from their own lives. Susan’s books have made Booklist’s Top 10 Romances list in four out of five consecutive years. RT Book Reviews says, “When it comes to heartfelt contemporary romance, Mallery is in a class by herself.” With her popular, ongoing Fool’s Gold series, Susan has reached new heights on the bestsellers lists and has won the hearts of countless new fans.