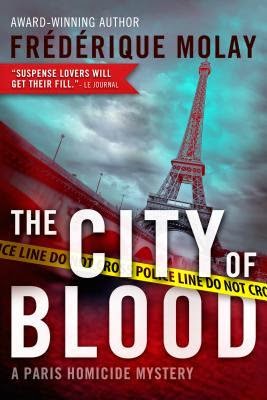 When a major Parisian modern art event gets unexpected attention on live TV, Chief of Police Nico Sirsky and his team of elite crime fighters rush to La Villette park and museum complex. On the site of the French capital's former slaughterhouses, the blood is just starting to flow, and Sirsky finds himself chasing the butcher of Paris, while his own mother faces an uncertain future.

The City of Blood by Frédérique Molay
My rating: 3 of 5 stars

The City of Blood by Frederique Molay is a 2015 Le French Publication. I was provided a copy of this book by the publisher and Netgalley in exchange for an honest review.

This book has been translated from French to English by Jeffrey Zuckerman.

This is the third book featuring the elite Paris crime squad headed by chief of police Nico Sirsky. In this installment, the squad is caught of guard when the excavation of a long buried banquet unearths a dead body along with it, while being filmed live for national television.

The case is an unusual one to say the least. Forensics will have their hands full dealing with a thirty year old skeleton, nicknamed “ Skeletor”. I enjoyed the forensic explanations and the way the author handled what could be rather dry reading - or disturbing to some, with a little humor, keeping the tone as light as possibly while detailing causes and times of death.
As it so happens, the son of a famous artist disappeared thirty years ago and so it stands to reason, the body is mostly likely his. Now the man's family will have to be told and all his old friends, lovers and colleagues will be interrogated. There may be one or two other metaphorical skeletons unearthed along the way as result.

In the midst of the investigations, Nico's mother suffers serious health issues and Carolyn must keep him updated as the case heats up.

The laws in France are just a little different than here in the States when it comes to the statutes of limitations. For serious crimes, even murder, the limit is ten years. However, there are loop holes when new evidence comes to light. So, when it becomes clear the person buried all those years ago was indeed murdered, Nico and his team try to solve the case. A certain odd discovery about the body however, leads Nico to believe whoever killed him may be the same person the media has dubbed “The Paris Butcher”.

Sadly, this case was just too predictable for me. I love Nico, the insights into his personal life, and the Paris setting. I feel like I am actually in Paris when I pick up a book from this series. But, I figured this one out by the half way point. That isn't to say I had the culprit pinpointed, but I pretty much figured out what happened and the motive was fairly obvious. Not only that, this particular scenario has been done many times before in a thousand different ways, making the story not only predicable, but a little lifeless too. The sharp dialogue with the team and most notably with Carolyn is missing too. There is one scene in the book that was pretty funny and I had to admit I got a visual that had me laughing out loud.

Although, I found this chapter in the series a little lukewarm, I am still a fan and hope the next book picks up speed just a little bit.

I do appreciate the work the translator did with the book and as always it is very impressive.


View all my reviews
Posted by gpangel at 1:00 AM